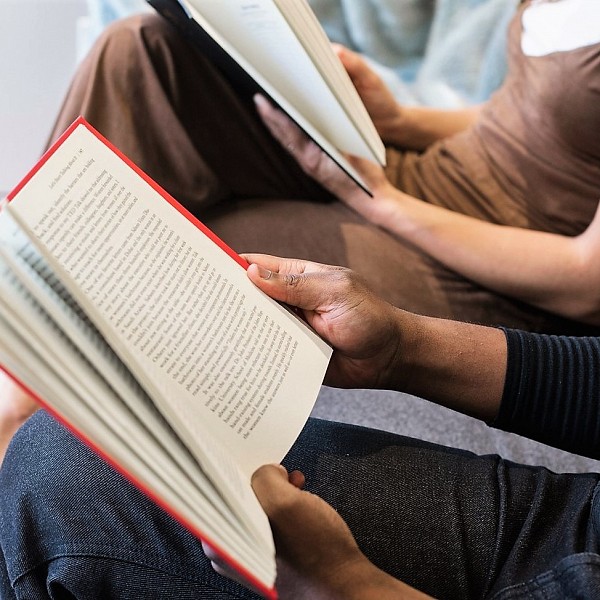 Getting into a good book that you can’t put down is one of life’s great pleasures. It’s even better when the book is part of a series that leaves you with anticipation of the next story.

Once you start on the journey of reading, especially a thrilling work of fiction, it will suck you into a new world with wonderful characters.

If you’re looking for something new to read, here are a few picks by writer Leila Nasr-Sharifi that will blow your mind which are wonderful for both seasoned readers and those just getting into the mentally stimulating habit.

This is the series that made me realize how just much fantasy books ROCK! Prepare to be taken to another world where faeries and other interesting, yet deadly creatures exist. This series is a rollercoaster of events that make you fall in love with some characters and detest others. These books are hard to put down, so be prepared to pull some all-nighters! What’s even more exciting is that the newest book in the series called A Court of Silver Flames came out this month! There are now five books in the series.

It’s taken me a while to figure out how to start explaining this one, because, well, to explain it in a short paragraph is equivalent to finish writing a test in 10 minutes.

First, I’ll say it’s easily a 5/5. That may not mean much to you, but maybe the rating on Goodreads does. The story is detailed and cleverly written to induce emotions on the literal crazy journey of the protagonist. Kvothe, known to the world as being Kvothe the Bloodless, Kvothe the Angel-Killer, etc. begins his journey as a smart, happy and curious young boy when a tragic incident happens, causing him to endure things that is heartbreaking. There are two books in this series which are excellent. The lovers of this series have been waiting for the third book to come out for over ten years. I hate to break it to you, but it likely won’t come out, however, do not let that stop you from reading these books! It is absolutely worth the read.

Death, grief, loss, friendship, love and much more. Sometimes the most tragic of books are the most powerful. I just made that up, but it sounds true, especially with this book right here. This story takes place more recently and is about a woman’s journey through Mexico to the United States (on foot) with her son to escape a drug cartel that is on the hunt for her.

Historical fiction is the genre to learn about real events, especially if you’re someone like me who can’t remember anything about history without a story as emotional as this. The main character, Isabelle, is a strong woman who believes it is her duty to protect the French and English people against the Germans who occupy France in the second world war. She has a fiery spirit to defy the Nazis and does so right under their noses. For those who like some romance in their novels, you can find that in this one right here! You do not want to miss this amazing story.

You’ve heard the saying, “don’t judge a book by its cover,” right? Well, am I ever glad I didn’t follow that advice with this book. I picked this baby up because the cover captured my attention, and to my delight, it’s a phenomenal story about Alaska! Having never been there, I was astounded by the imagery that conjured up in my mind’s eye through the words Hannah intricately wove together. Of course, the story is more than just about Alaska. The main character is a young girl who gets roped into the complicated and toxic relationship of her parents. Her dad is a war vet who has severe PTSD. To get away from the hustle and bustle of city life, the family decides to move to Alaska. Dun, dun, dun.

Khaled Hosseini is a gifted storyteller who writes fictional books about Afghanistan. Taken to a different country where the culture is so vastly different than Canada’s, you will experience some the struggles that the characters have no choice but to face. Goodreads puts it wonderfully: “it is a tale of two generations of characters brought jarringly together by the tragic sweep of war, where personal lives - the struggle to survive, raise a family, find happiness - are inextricable from the history playing out around them.”

Other Hosseini books I recommend are: And the Mountains Echoed and The Kite Runner.

Originally written in Spanish by Isabel Allende and translated to English, this book had been rejected several times before being published in 1982 in Buenos Aires. The story follows three generations of the Trueba family in Chile. Explore the family and country’s political struggle, murder, clairvoyance, karma and more.

There you go everyone! Now pick one and start reading!