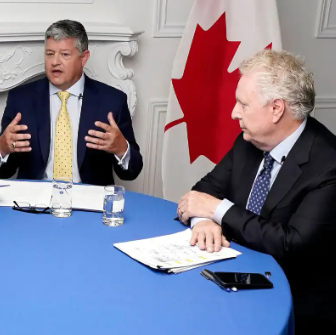 Scott Aitchison, Parry Sound Muskoka MP, put Jean Charest on the spot at last night's Conservative Leadership debate. Throughout the final debate of the leadership contest, Charest emphasized the importance of the party's need for unity and the value of his political leadership experience.

The former Quebec premier, who formerly served as the head of the federal Progressive Conservative party, refused to say whether he intends to stay in the Conservative Party of Canada if another candidate is declared the victor on September 10. There are still six weeks left in the race.

The former Huntsville, mayor and Conservative MP Scott Aitchison, who was first elected to the House of Commons in 2019, says he will retain his seat regardless of the outcome, and asked Charest “Can you honestly say that if you do not win this race, that you will be here on Sept. 11th, helping Leslyn Lewis, Pierre Poilievre and me unite our party?”

Charest responded by saying, “To answer Scott’s question, I have all my life been a conservative. I believe in conservative values. I led a coalition government in Quebec because, as a conservative, I believed in the unity of this country.”

Charest, led the Quebec Liberals, the main federalist party in the province, for 14 years.