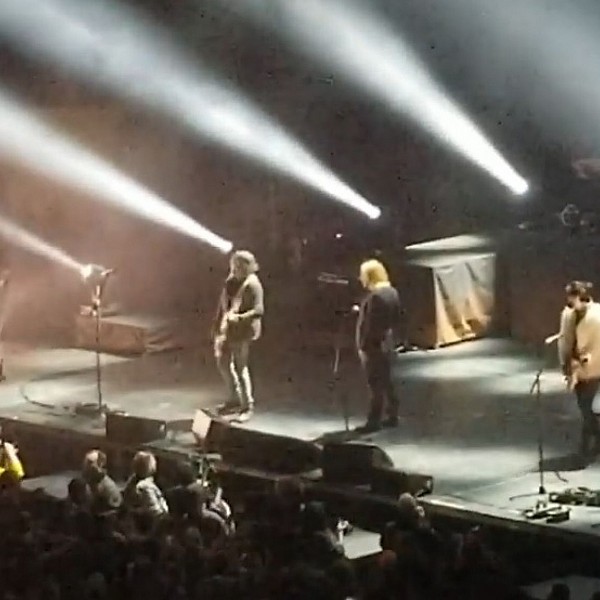 Backstage With The Glorious Sons

Recently I got to meet the biggest rock band in the country.  The Glorious Sons band wagon came to Toronto the other week and the sell out crowd got treated to what can only be described as full on, rock & roll experience.

The show started with Toronto’s own – by way of Austin, Texas band, Black Pistol Fire, who gave the fans a taste of the epic show they were going to see.  The duo consisting of Kevin McKeown and Eric Owen jumped on stage and delivered their classic mix of classic southern rock mixed with garage punk.

After an hour of great songs that I surprisingly knew – from listening to TheBay887.FM, it was time for the headliners to come on, so I made my way up to the Glorious Sons hospitality box to watch the show.

It's always a treat to get into a hospitality box, and I’ve had the pleasure before, but this time it was special, because I had a fantastic view of stage, plus all the food and drink I could want.  I also got the opportunity to meet the band’s manager and the band’s entourage and their families.

When the band made the stage, they didn’t disappoint and got right into their biggest hits.  It was amazing to watch the show, because in the last 18 months or so, the band  has rocketed to stardom based on solid songwriting.  Somewhere along the road, they must have gone to rock and roll school,  the stage craft was nothing short of amazing, with each band member making it look easy.

I was told that, the day of the show, the band had just been booked for a date at The Kee To Bala this summer – because its one of the venue’s in Canada that you just have to do.  So look forward to an announcement soon, and get ready to buy your tix before its too late.  Its not often you’ll get to see an act that can fill up an big arena play such a small venue.

The band’s War On Everything Tour has taken them all across the states and Canada, and will be wrapping up in Montreal in April. While at the hospitality box, I heard that the Chili Peppers had asked the band to open for them on their upcoming tour, based on a recommendation from The Stone’s Keith Richards.  The band’s trajectory is clearly meteoric.

After the show ended, we were all hustled to the afterparty at the Platinum Club inside Scotiabank Centre.  I went and had a beer, chatting with even more people who had scored VIP tickets.  I wasn’t there long before a small group of us were taken into the dressing room to meet the band.

The band had been set up in the visiting team’s dressing rooms just off of the court/ice surface.   There were hundreds of people in there – it was kind of shocking how packed it was, but I managed to get right to the back where the band was and have another drink there – they had just set up the bar – and the martinis were flowing.

The place was packed and I only got a few minutes with the band, who told me they knew about Hunters Bay Radio and thanked us for our support of the band – something we had been playing since their first release.

Unfortunately, my rock and roll experience had to come to a premature end, and rather than partying into the wee hours with the band, my responsibilities as station manager kicked in, knowing that I had to be on the air in less than 6 hours, and I begged my leave after thanking the band for their hospitality and off I went for the 3 hour ride home.

As I drove home, I couldn’t help but think what a great night it was and how fortunate I was to see the show, never mind meet the band.

The band has been nominated for a Juno for Best Rock Album of the Year.  They’ve got my vote!