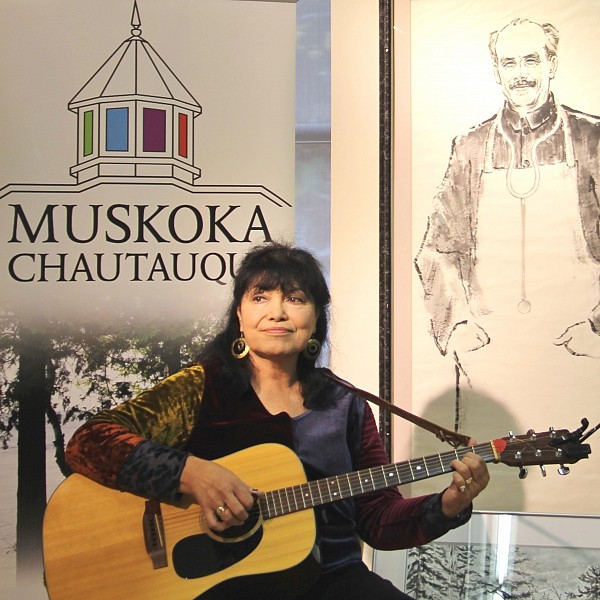 Hunters Bay Radio offers a unique community experience not only by broadcasting events and supporting local businesses but also through frequent profiles of local music performers and songwriters. What may not be apparent to daily listeners of the Bay is the depth of experience and world class entertainment that passes through our doors. Some of the artists who dwell within Muskoka have in fact ascended the heights of musical stardom. This is my tribute to a gentle, humble soul, who is always so encouraging of all who try their hand at the rugged life of making music and song.

Which words would you choose to describe a life lived in the arts and music - living legacy, embodiment of the past for the present, for the future?  How would you then characterize such a living legacy? Poised, beautiful, gracious, thoughtful, and meticulous?

To hear, Beverlie Robertson, finger-pick her weathered Guild twelve string guitar, with strong purposeful notes; as she steps in to the microphone, to sing with a full contralto that would make even the angels weep, is to behold the essence of poetry, melody and song. The extraordinary tunes Beverlie sings; hearken back to days, deep in the early folk music revival. Hearing such songs is to be caught as if by the living breath of time that has sustained these essential songs over the years. Beverlie brings life to these songs, with the careful discipline that only one with clear insight and understanding for a timeless oral tradition, is capable of. 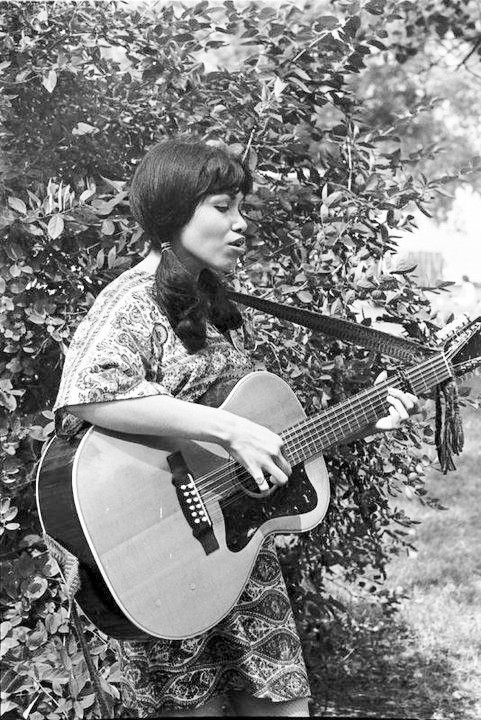 The Canadian folk music revival began in the early 1950’s with such popular singers as Alan Mills and Ed McCurdy, who began to appear on CBC radio and television. Even though many other Canadian archivist had worked on preserving and documenting historical folk songs; Mills particularly tried to introduce and record many of the traditional songs and ballads that had survived through an oral tradition and transmission of passing songs from one generation to the next.  Such songs as “Brave Wolf” (about the death of General Wolf on the plains of Abraham), “ Iroquois Lullaby”, “ and A Ballad of New Scotland” appear on his 1960’s album Canada’s Story in Song.  Mills had already recorded several albums of rich Canadian folklore throughout the 1950’s. While Mills was attempting to present older unheralded songs, new song writers such as Wade Hemsworth’s “The Black Fly Song “, and “The Log Driver’s Waltz” and McCurdy's “Last Night I Had the Strangest Dream” were being added to the Canadian folk repertoire. [i]

In the midst of this activity, Canadians were also sharing traditional songs and sound from the Americana folk songbook. Initiated by the delta blues, and New Orleans jazz blues music, speciality recordings were spreading a wide array of song (and world music) to North American audiences, particularly when songs such as “Goodnight Irene” by Huddie William Ledbetter, better known by the stage name Lead Belly, were popularized by the Weavers or the most famous “ This Land is Your Land “ by Woody Guthrie. Pete Seeger who had been blacklisted from stage performance kept spreading the news though college campuses and instructional manuals of banjo and guitar. New York City’s Greenwich Village and Washington Square became the American hub for folk music.

It was into the heart of the burgeoning folk music scene in Yorkville, Toronto, in early 1961, that Beverlie found her voice and her life long career. Trained as a classical pianist, Beverlie had taught herself to play and gravitated to twelve-string guitar for its fullness of sound. Most of all, she wanted to sing! Playing guitar would allow her to sing like her hero, Ronnie Gilbert who had sung with the Weavers, probably one of the most famous folk groups of all time. She quickly became part of the legendary trio, the Chanteclairs, comprised of herself, Klaas Van Graft, and Alan MacRae. Their trio began to find audiences throughout the world and for the next several years Beverlie worked constantly, touring North America and Europe. They were a part of the vibrant folk scene in the Yorkville, Toronto and Montreal. Clubs like the Purple Onion, The Penny Farthing and the Riverboat my be long forgotten but they were at the epicentre of a song and artist revolution. 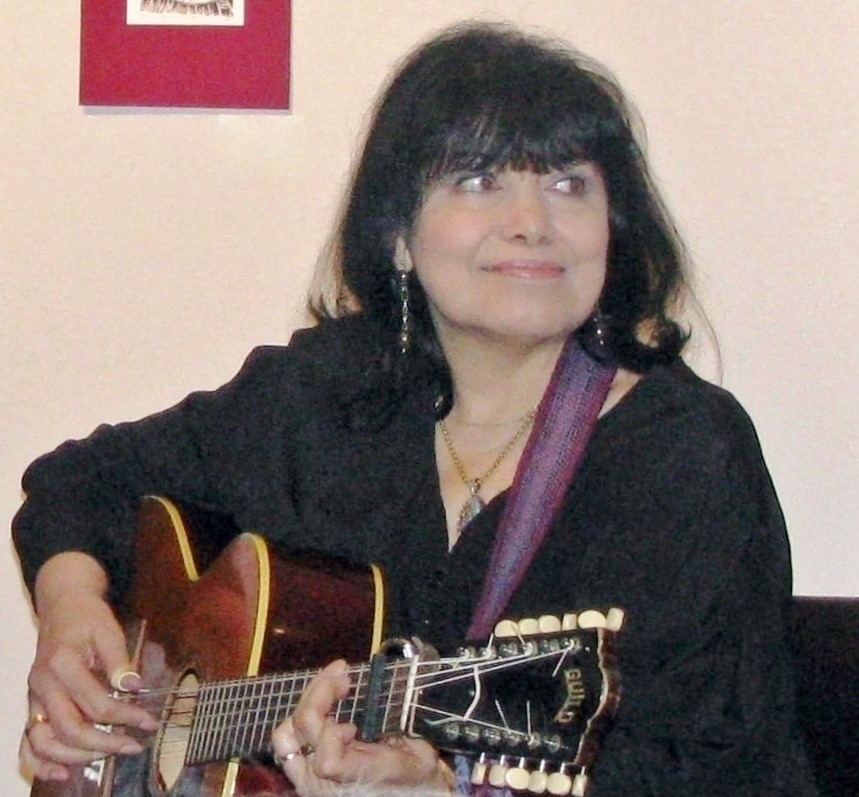 During this period, Beverlie befriend many of the songwriters who would become well known as the Canadian music industry developed and blossomed. “Her friends in the early years, Gord Lightfoot, Joni Mitchell, David Ray, Sylvia Tyson, The Country Gentlemen and the Travellers all perceived in her a warm glow of humanity and gave her their original songs to sing.”  [ii]

Beverlie continued to work with the trio but at some point began to also to perform on solo, having found her own audience for her distinct musical styling and her powerful heartfelt vocals to such classics as Tom Paxton’s famous song  “Ramblin’ Boy” seen here from 1996 https://youtu.be/xozCGxBpBjw.

Beverlie married Charlie Robertson in the mid sixties and they began to tour as a duo across Canada and beyond. Throughout this touring period, they both encouraged audiences to engage in the folklore tradition, which is that songs and stories contain hidden truths that can be known only through the listening. Soon enough they began to raise their family and settled for some period in the Kitchener / Waterloo area. Eventually she and her family came to the Port Carling area which she now calls home and where she frequently has live shows.

Beverlie has continued to perform throughout her lifetime and she has accomplished many other things in the arts. She “served on the Artistic Advisory committee of the Mariposa Folk Festival; she is a former member of Mariposa-In-The-Schools, a founding member of Kaleidoscope in the Schools, Muskoka & a director of the Muskoka Lakes Music Festival/Muskoka Chautauqua. She is also a director of the Arts Council of Muskoka. She was nominated as a Woman of Distinction in 2006. Her latest book With Knowing Eyes; Canadian Women in Song, illustrates developing life in Canada from a woman’s viewpoint, as seen in our music. She also transcribed all the music. She taught a course at Wilfred Laurier University based on its songs and lore.”[iii]

Her remarkable CD “With Knowing Eyes” is a tribute to many of the songs she holds dear while celebrating the world through eyes of a woman’s courage, knowledge and wisdom. It is available through iTunes.

Music is the heart and soul of human experience. The traditions that honour the life experience of everyday working folk survives within the folk songs that Beverlie so proudly carries on through performing and teaching. Let her voice be heard, known and cherished.

You can find out more about Beverlie Robertson’s remarkable story and journey at: