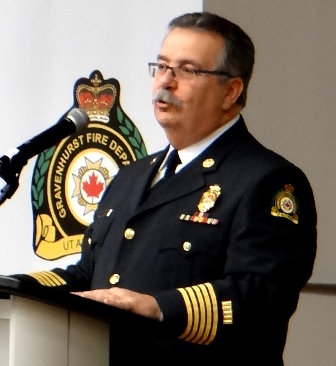 Recently retired Gravenhurst Fire Chief Larry Brassard says it was an honor and a privilege to perform his duties. He also says he enjoyed working with town council and a fantastic team of firefighters.

Brassard officially retired Jan. 15, 2021. He began his journey with the Gravenhurst Fire Department in 2012 after having been fire chief in other parts of Ontario since 2001. Prior to that, Brassard worked for the Halton Regional Police Service.

Mayor Paul Kelly graciously told Brassard, “Larry, on behalf of our council and our community, I want to thank you for all of the time and dedication that you have given us as a community, as the fire chief.”

During his career, Brassard was nominated for the Queen Elizabeth Diamond Jubilee Medal, as well as receiving medals which recognized his many contributions to both the police and fire services.

Brad Bigrigg was appointed as Interim Fire Chief by council with the intention of having a permanent replacement for Brassard in place by the summer season.