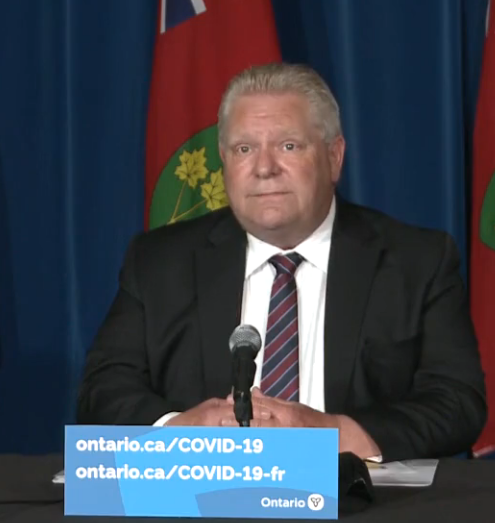 Editorial: Don’t get all excited about Ford plan just yet

Well, at least there is an actual plan this time. That is about all we can say about the Provinces three-stage approach to re-opening the province.

After more than a year of flip-flopping in and out of lockdowns that weren’t really lockdowns, ridiculous colour coding systems by health unit, and only listening to the expert medical advice he felt like listening to, Doug Ford announced the Province’s plan to move forward. We’ll get to the actual plan a little further down.

In announcing the plan, Ford threw a few crumbs towards golfers, tennis players, and just about everyone else who wants to get outside for some fun and physical activity. But, while we can be happy that he finally did this, remember that should never have been closed in the first place.

Closing these options to the public ignored many medical experts – including those on the province’s COVID task force – who explained for weeks on end that these outdoor activities were low risk in terms of spreading the virus.

So, we shouldn’t get all gushy over this news. It’s three weeks too late, has cost golf courses and their employees a lot of time and money, and unnecessarily pushed back a golf season that isn’t that long to begin with.

As well, the stay-at-home order is still in place until at least June 2, and it’s not until Phase 2 where sports leagues will be allowed – which doesn’t have a definite date – so it’s not like we can start getting youth sports organized again. Which is another item of contention where the data suggests outdoor sports leagues are low risk.

Perhaps, these activities are even less risky in organized settings because they require strict screening and procedures to take place. But we digress.

There were also no real answers on whether schools will be opening again this year, and already the TLDSB has sent emails asking parents to pre-register their children for either in class or virtual learning for September.

Many parents just want to know what is happening through June – home learning or in-school – in order to make arrangements.

But, when asked the question, Ford was non-committal. Forgoing a definite answer, he resorted to a lot of double talk including projected percentages of an increased COVID spread in schools that is more likely to occur in hotspots rather than the whole province.

When told the government had the power to open schools, he went back to an increased spread of COVID as to why they’re not doing it yet.

It left us wondering: which is it? The teachers’ union or the spread of COVID?

Perhaps it is an unwillingness to act in the best interest of working parents in the province – especially those in smaller communities with low COVID numbers like Muskoka, and many of the surrounding areas.

In terms of the re-opening plan itself, overall, it isn’t too bad – on paper. Three phases of re-opening with a targeted date of June 14th to begin Phase One, then in 21 days if targets on a variety of fronts are met, the whole province moves into the next phase, and the process repeats itself into Phase 3 and beyond.

We won’t rehash the whole plan, but you can visit this link to see the details: Province Releases 3-step Plan for Re-opening

Yet, there are some caveats to consider. One of those is the fact a lot of factors are involved in moving from each phase to another, not the least of which is percentage of Ontarians who have had at least one vaccination. It’s almost as if the province is saying, “no shots, no summer” to the residents.

That is concerning because you end up either forcing people who are hesitant to get vaccinated to do something they’re not comfortable with, or you are (once again) punishing people who have done everything you asked them to do.

Another interesting item is that the current stay-at-home order ends on June 2 and Phase One is not expected to start until June 14.

Now, we believe this is to allow the province leeway to push out the stay-at-home order or move up Phase One’s start – but, again, this doesn’t help the people needing to plan their business and home lives.

We’re also concerned about the potential “emergency brake” and subsequent lockdowns the provincial government can impose across all Ontario communities if cases begin to rise in certain areas.

We suggest the province look at any further restrictions community by community rather than punishing an entire province because the GTA and other densely populated areas are seeing another outbreak.

Frankly, they have the data and the ability to go region by region and shouldn’t be deterred by “people travelling outside of their area” because they’ve been doing that since the beginning. Muskoka has been inundated by tourists making their way up from hotspots since the pandemic began.

We have seen – and even spoken to – many couples and families stopping into our towns and townships for daytrips or weekends.

If you’re not going to make them stay at home with real lockdown measures, then it’s nonsensical to think this so-called “lockdown” will make a difference. All you are doing at that point is punishing the many for the actions of the few . . . but, Ford has been doing that all along, so I guess it would be par for the course.

I guess we’ll just have to wait and see – and hope – that the three-phase re-opening plan is successful and that parents of school-aged children are given real answers to their pertinent questions.

In either case, we should be prepared for more flip-flopping, decisions lacking common sense, and a potential return to a lockdown in Ontario which ends up hurting small community businesses everywhere.