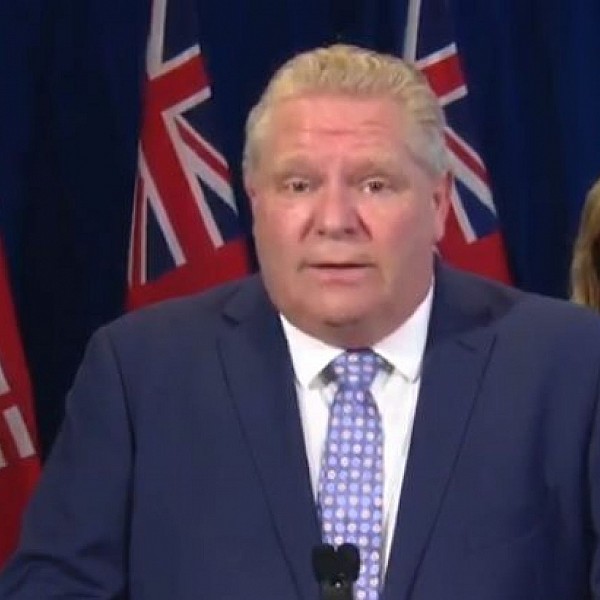 Just who is running the province these days?

Is it the Premier? His Caucus? Anyone from Queen’s Park? Or is it the medical bureaucrats known only as “public health experts” who are calling the shots?

After yesterday’s ridiculous announcement that Simcoe-Muskoka is once again going into a lockdown, one can assume it’s the medical bureaucrats. And that bunch is severely disconnected from reality as they continue to fear-monger and make decisions that are contradictory, confusing and lacking any backbone.

Trying to understand the decision-making process is futile – I’m not sure those making the calls even understand it.

Consider that overall cases in the province have steadily dropped over the past month, that Muskoka had zero new cases as of Friday afternoon’s report, that active cases in the District Health Unit were on the decline at the time of the announcement, that the new variants posing “an enormous threat to public health” have not been proven to be more potent than the original virus.

Don’t believe that last part? Well, it’s true. According to the World Health Organization’s Chief Scientist, Dr. Soumya Swaminathan, while the variants are more infectious – meaning they spread faster – the severity of those infected is no worse than before.

“Scientists have now studied this and have found that these variants do tend to spread faster, they're more transmissible or more infectious,” she said in an update interview for the WHO website.

“So that's the worrying part. However, so far, they do not seem to cause more severe illness or a higher death rate or any sort of different clinical manifestations. They seem to behave pretty much as the previous viruses were behaving and cause a pretty similar kind of disease.”

You can listen to and/or read the whole interview with Dr. Swaminathan here.

So, tell me again why this variant which spreads a little faster but isn’t more potent or deadly has suddenly the biggest threat our community is facing?

That’s my personal question. However, there is a more pertinent question being rhetorically asked by many I’ve spoken to and that one is: at what point will Mr. Ford and his elected party step-up and actual lead this province again?

Time and again, they are deferring decisions to “public health experts” and the results continue to cause more harm than good.

The mental and emotional fatigue being felt by the entire population, from babies to boomers and beyond, is leading to a variety of current and potential societal issues including reports that opioid overdoses have increased, reports of increased domestic abuse, more broken homes, more children suffering from both physical and mental abuse, more unwarranted agitation among the masses, more substance abuse in all forms, and the list goes on. There were also early concerns from mental health officials of the risk for increased suicides, but the final confirmed 2020 numbers aren’t yet available as some investigations are still ongoing.

It’s also led to many businesses shutting their doors for good, others just hanging in there by the skin of their teeth, people from all walks of life going without a pay cheque and some not knowing when and if they’ll ever work again, increased need and numbers of families using the food banks, a decrease in average spending per family, and again, the list goes on.

It’s all good and well to use colloquialisms and bravado during press conferences when talking about vaccines in Ontario, but if in the same breath you’re abdicating leadership to those who are not elected by the public, then it loses all meaning.

Real leaders don’t need all the bombastic language to get their point across because they’re too busy making important and strong decisions to worry about such things.

How about saying to the “public health experts” that by going against their own recommendations for colour-coding, they’re in effect destroying the already fragile public psyche and risk losing the common-sense crowd? When this happens, they can forget about anyone caring about their “protocols” and “recommendations.”

How about listening the public and private leaders in Muskoka who have been asking for many months to treat this region as its own entity for pandemic purposes? Which, in this case, would put Muskoka in a “green” zone.

Judging by the myriad of texts I received after the lockdown was announced, which ranged from sadness to frustration, this lockdown announcement may be the proverbial straw that broke the camel’s back among many otherwise sensible individuals.

The tide is turning, and more people than ever before are rapidly moving towards the “it’s just a virus, let’s all just get over it” crowd. And they can’t be blamed for feeling this way.

After all, the so-called leaders of this province have no continuity in their message, don’t follow their own rules, refuse to make a decision based on common sense, have constantly handed off responsibility for making decisions to others, and continue to take the population’s intelligence for granted.

If the newest lockdown decision was based on all the criteria presented and the ruling party had been staying the course throughout the pandemic, then I would be here defending their actions even if I disagreed with them. I would do so simply because I can respect a true leader who makes sturdy plans and then bases all their decisions on that roadmap. Continuity and understanding goes a long way towards a happy populace – or at least a stable one.

Unfortunately for Ontario, our so-called leaders have done the opposite: their plans have changed constantly, they don’t even stick to their own criteria in terms of colour-codes and zones, and we’re not sure if they’re even in charge anymore.

It’s a sad state of affairs it must be rectified by the only people who can: The Conservative Party of Ontario and Premier Doug Ford.

They need to look themselves in the mirrors and say, “we can do better, we can be better, the people of Ontario deserve that much.”

Then they need to pull up their pants, take off the “emergency brake” on this farcical lockdown, and take back the decision-making process from the “public health experts.”

It would do a lot to start winning back the respect they’ve lost in the past few months.