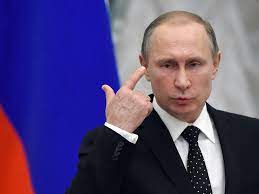 It seems the Canadian, American, British and Western European governments have learned absolutely nothing in the 80-plus years since World War II began.

We state this because anyone watching what has unfolded since a certain ex-KGB operative became ruler of Russia can easily draw comparisons to when the tiny moustached leader of the Nazis made similar movements in the 1930s.

Yes, we’re comparing Vladimir Putin to Adolf Hitler. And in many ways, it’s an apt comparison.

Taking over neighbouring countries that were once part of a defunct empire? Check.

Persecuting individuals due to ethnicity and religion? Check.

Hosting world sporting events to show how welcoming and open the country is? Check.

Suppressing journalism and the media through violence and terror? Check.

Ignoring the half-hearted measures by allied nations to stop the aggression? Check.

This list could keep going, but we feel the readers get the picture. But this isn’t an editorial aimed at reminding the reader what is plainly obvious.

Rather, this is an editorial aimed at Canada’s Prime Minister and the other Western leaders who need to step up their game and truly get tough with Russia.

We’ve seen this act before, and we know how it ends if our nations don’t get tough with Russia now. Last time these exact circumstances transpired – albeit with different nations – we ended up in World War II.

And we really, really don’t want to see a WWIII in the nuclear age.

Which is why all Western nations need to use real force to stand up to the bully at hand – Russia’s dictator Vladimir Putin. And let’s be clear, he is most definitely a dictator whether one wants to believe it or not.

He is also a Cold War veteran who believes the USSR should be revived and he’s intent on taking back all the former Soviet states and again have them under the Kremlin’s rule. Yes, this includes those nations that are now in NATO.

While the idea of lining up thousands of tanks and soldiers on the front lines in the Ukraine is not a pleasant thought, the very least the Western allies should be doing is creating No Fly Zones to protect the Ukrainian people from constant air attacks.

And we do need to send troops to help fight the Russians and not just rely on the many foreign fighters who have gone overseas to defend a sovereign state’s right to not be invaded by a larger, stronger neighbour.

You see, the only thing a bully will respect is someone who pushes back. And all dictators are nothing more than pathetic bullies who want to hurt others to make themselves feel good.

Too bad our Prime Minister – as well as many of our Western allies – aren’t proving to have the internal fortitude needed to do more.