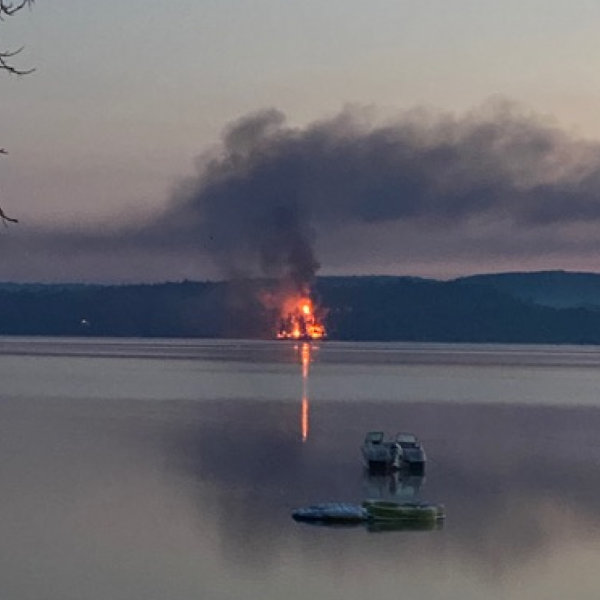 On Sunday, at approximately 4am Kearney Fire and Emergency Services responded to a fully involved structure fire on Buckley’s Road.

Upon arrival the fire had quickly consumed the 1000 sq. ft. cottage and surrounding trees.

Automatic Aid and mutual aid was activated and fire departments from Perry Township, Burks Falls, Magnetawan, Sprucedale and Sundridge were called in to assist.

The Fire Dept. says that extreme heat, dry conditions and a ruptured propane tank made the job of extinguishing the fire more difficult.

Despite the efforts of over 30 Firefighters, three pumpers, five tankers and other firefighting equipment, a house under construction and another cottage were lost.

Fire Chief Schaefer said all crews worked hard under extreme conditions to get this fire under control.

Two firefighters were treated for heat exhaustion on scene. The fire is not under investigation and the dollar loss is estimated at approximately $750,000.

Severe thunderstorm watch in effect for the listening area

$4.5 Million To Replace Components Of The Pool In Huntsville

During the electronic general committee meeting in Huntsville on Thursday s...

As part of Bracebridge’s efforts to support the community during this tim...

The Town of Bracebridge is reminding residents that effective Monday, July ...

Muskoka Heritage Place and Museum is opening to the public today for the se...