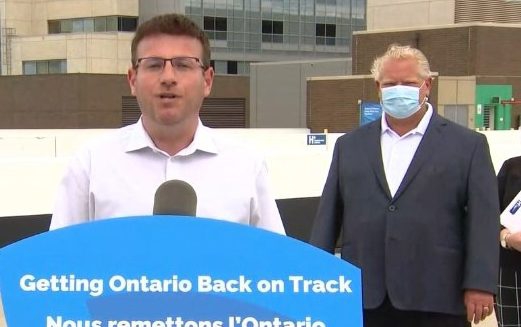 Ontario Premier Doug Ford’s decision to eject York Centre MPP Roman Baber from the Conservative Party for having a dissenting opinion is wrong on so many levels.

According to a statement released by Ford, Baber was spreading misinformation, putting people at risk and undermining the efforts of frontline healthcare workers … which itself is nothing more than misinformation and politicking.

To summarize what occurred, Baber sent Ford a letter pleading with him to end the lockdown because of the negative effect it is having on mental health, children’s health, drug abuse, divorce rates and other items.

He presented his argument in a respectful manner and quoted recommendations from prominent figures, along with detailed statistics that supported his anti-lockdown request, and then cited each source. These sources included the Ontario Ministry of Health, Statistics Canada, the Centre for Disease Control, the Canadian Mental Health Association, Ontario’s Chief Medical Officer of Health, and more.

These aren’t conspiracy theorists, alt-right or alt-left websites, or any other source of misinformation. These are among the very sources the premier should be referring to for his statistical information.

Baber was sharing his opinion that was based on an extensive amount of research gleaned from recognized statistical and health-related sources. He cited his sources listed them in the letter he sent to the Premier. The level of research and dedication to presenting his argument would make old-school journalists proud (indeed, I was impressed).

This was not a matter of simply presenting a biased opinion based solely on beliefs and conjecture. He was not engaging in conspiracy theories or spreading false information. He was spreading an opinion based on numerical data – or what scientists, mathematicians, and other intelligent people would refer to as facts.

Many of Baber’s arguments echoed my own about the pandemic from this OPED in September: https://muskokaradio.com/news/article/editorial-its-time-or-perspective-facts-and-common-sense

Yet, I must concede that Baber’s research went deeper than my own. Based on the data, I agree with his stance on ending the lockdown – as anyone who has read any of my OPED’s could tell you.

All are free to agree or disagree with ending the lockdown as Baber suggested: there are arguments to be made both ways. But in no way should anyone agree with him being kicked out of caucus by Ford.

Not for presenting an opinion and idea based on quality statistical and professional sources. Not for disagreeing with the party line because he happened to do his own research rather than just nod his head at what was being said by “public health officials” in Ford’s ear.

For the record, I feel Ford has been solid through most of this pandemic and made decisions he believed were right – whether I agreed with them or not. He hasn’t been afraid to adjust course when the time has called for it, and generally had the interest of public health at heart.

But this decision smacks of dictatorship and quelling free speech. It dismisses the notion of a democratic society where one can be free of persecution for having a differing opinion. It spits in the eyes of accurate math, data, and facts while politicians insist on presenting only the “facts” that matter to their cause.

Mr. Ford’s decision to remove Mr. Baber from the Conservative Party sends only one message to all Ontarians: agree with everything I say … or else.