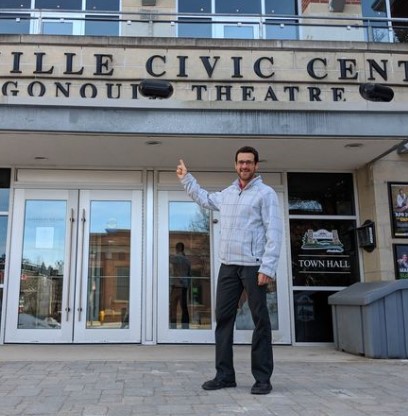 Supporters gathered Tuesday night at the Algonquin Theatre in Huntsville as Matt Richter and the Green Party officially kicked off his campaign for MPP in this year’s election.

Matt Richter said “On June 2, we are going to deliver honesty, integrity, and real leadership to Queen’s Park, and together we are going to make history and turn Parry Sound - Muskoka Green.”

Mike Schreiner, the leader of the Ontario Greens, also took the podium along with Matt’s wife Kailey Richter to introduce the candidate he says is best positioned to represent Parry Sound - Muskoka at Queen’s Park.

The official launch of the Matt Richter campaign follows months of organized on-the-ground outreach to constituents throughout Parry Sound - Muskoka. Richter says it has been 25 years since an MPP represented Parry Sound - Muskoka in Queen’s Park who was not from the Progressive Conservative party. Beginning last fall, the Matt Richter mounted a campaign that saw over 200 volunteers reaching 27,000 voters.

The Ontario Secondary School Teachers Federation (OSSTF) announced on Friday their historic endorsement of Matt Richter as a candidate for Parry Sound - Muskoka MPP. The Ontario Greens—becomes only the second non-Liberal or NDP candidate to ever be endorsed by the union