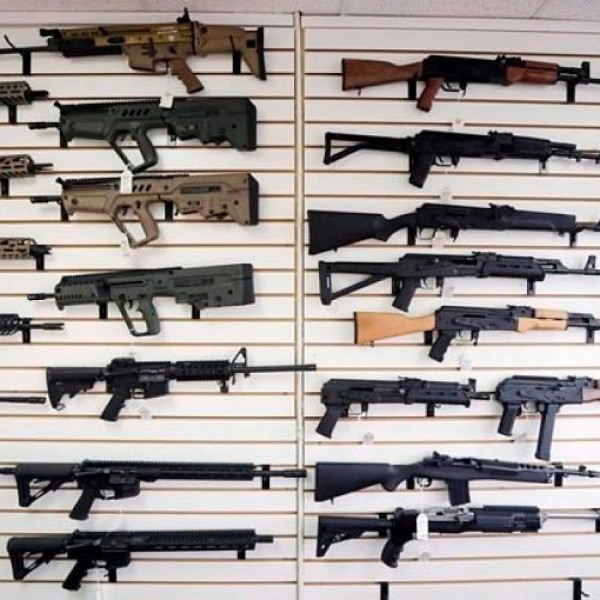 Guns Scare Me - Just My Opinion

I remember the day it happened, we had just closed up shop in Milton, and three of us were walking the night deposit to the bank along the outside of the mall I worked at.  The money wasn’t visible and the fact we were “interrupted” as we casually walked along discussing what we going to have for our after work snack at the local pizzeria, leads me to believe we had been watched before.

We were probably watched earlier in the night, as my boss and I deposited $50,000 into the same night deposit.   Fortunately for me and my boss, he didn’t strike then, or there would be hell to pay.  In fact, as we were breaking company policy with regard to how much money we could take to the bank at once, my boss – a gun fanatic – said he should have had his gun on him, just in case something happened.  I remember telling him, that if he did bring it, he could do the deposit by himself, saying that it would be – the un-armed guy who would get hurt if we got robbed.  Little did I know that a half hour after my boss left for the night, “it” would happen.

It was a beautiful summer night, nice and bright.  Milton at the time was a sleepy little town of some 30,000 people.

So, it came as shock to me when a van pulled up beside us as we walked along the sidewalk at the side of building and the driver was wearing a black balaclava.  He told us to stop and give him the money or he’d kill us.  At first we thought it was a joke and we walked on for a few steps before realizing what was happening.  So as the three of us stood there, he started to demand the cash, which I didn’t have.  One of my supervisors had the deposit bag tucked away discreetly in his rain coat pocket.  He just stood there, frozen.  The gunman started to get agitated with the response and when he heard me repeating his licence plate number over and over – trying to get the other two to wake up and pay attention – he got out of the van and came over and put the gun to my head and told me to shut up or he’d pull the trigger.  I shut up.  But that didn’t get him is money. Everyone else was paralyzed in fear.  Holding my hands up, I told the robber I would get the money and I walked over to the supervisor and reached into his coat and pulled out the deposit bag.  I gave it to the man and he got back into his van.

By this time, we had amassed quite an audience, with cars pulling up to watch it go down in living colour – from a distance.

Once again, the robber waved the gun and instructed us to turn around and put our hands against the wall and count slowly backwards from 100, or he’d shoot us.

I ran straight to a bank of payphones and threw in a quarter and dialed 911.   911 was brand new, and was in testing – to go live the next day.  So I was the first call they ever got and the police were there in less than 2 minutes.

He was gone.  The van was around the back and he obviously had a getaway car.  The police never caught him.  It was only in the hours that followed that we realized what had happened and when interviewed by police, they asked what kind of gun it was, and how big.  When the officer pulled out his “six-shooter” type gun, we just about jumped through the ceiling.  One of the persons in our group was the personnel manager and she was convinced the robber would be waiting for her on her way home.  So I had to follow her home and her husband brought her to work and picked her up for weeks after that.  The next day, the supervisor quit.

I’m telling you this right after the Prime Minister put a ban on some 1500 assault style guns.

I don’t see a need for any assault style guns in the general population.  For obvious reasons, guns aren’t my thing.  Maybe its not your thing either.  But does that give us the right to take one away from someone who has been taught how to handle one, someone who is legally responsible for the use and safe storage of such a weapon?

I’m pretty sure that the gun used in my case wasn’t a legally owned firearm and I think that that is the case in most gun crimes, ever since “Toronto –the good” turned into “Toronto – I’m not going there.”

So why do the Liberals always want to take away guns from those who go through all the requirements to get licenced to acquire them?  It’s quite involved to get a licence to own a gun.  Chances are the owners aren’t going to commit a crime with them.

However, I can safely bet that the gun used to rob me, was probably stolen and its identifying marks removed.

So how is gun control going to fix that? Shouldn’t the gov’t try and achieve some form of “crime-control” instead of trying to disarm law-abiding, non-violent Canadians?

The man that facilitated the ban, the Nova Scotia shooter, is reported to have illegally obtained his weapons in the good ol’ U.S. of A.

One can only think that the PM is striking while the iron is hot, and he is using this terrible crime to push through the legislation with the maximum support, while he can.

The only trouble is, that it’s not going to solve the problem.  Now what?