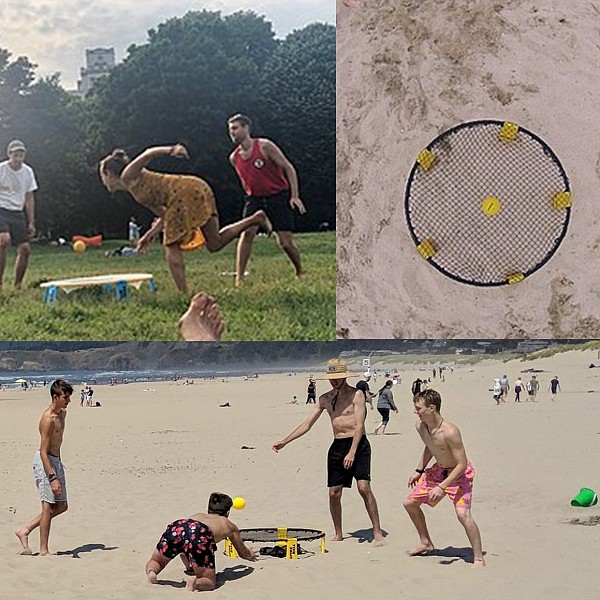 “Okay. Whatever you say dude. Just like darts or billiards are REAL sports.”

This was the conversation which introduced me to the game commonly referred to as Spikeball. However, the actual name of the game is Roundnet and the most popular brand making equipment is Spikeball.

Earlier this summer, we were doing some family soccer training at the field when a group of four young adults (I’m guessing they were university/college kids) pulled out a small round contraption and set it up near the halfway line.

Out came a bright yellow ball and they began spiking it at each other. There as a touch of intensity, but mostly laughter and good vibes emanating from the foursome.

Keeping an eye on the group to try and figure out the rules of the game, I found out they were play 2 v 2 and the mission was to hit the ball off the net in three hits or less in a manner allowing the other team to return it. It took solid hand-eye coordination and even some diving to make plays.

I realized it could turn into a real sport if it caught on with a larger audience. Then, I did some research and came to the realization, the larger audience was already in the know.

Looking to find out more, including the rules and how to play, I visited www.roundnetontario.ca and eventually www.spikeball.com. In doing research on just these two sites, I found out there have been tournaments running for several years throughout North America with Spikeball boasting over four million players and its own Spikeball Roundnet Association (SRA).

My son eventually did try out Roundnet for himself while visiting a family cottage where some young adults had a Roundnet set-up ready to go. I watched for a while and then went for a swim, content and corrected in my early assessment.

Seeing the smiles on their faces, the physicality of their movements, and camaraderie they were developing made me realize this is a REAL sport.

When Chris isn’t writing pieces for HuntersBayRadio.com, Dockside Publishing or running MuskokaUnlimited.com, you can find him volunteering his time as a coach and board member for the Huntsville Soccer Club.