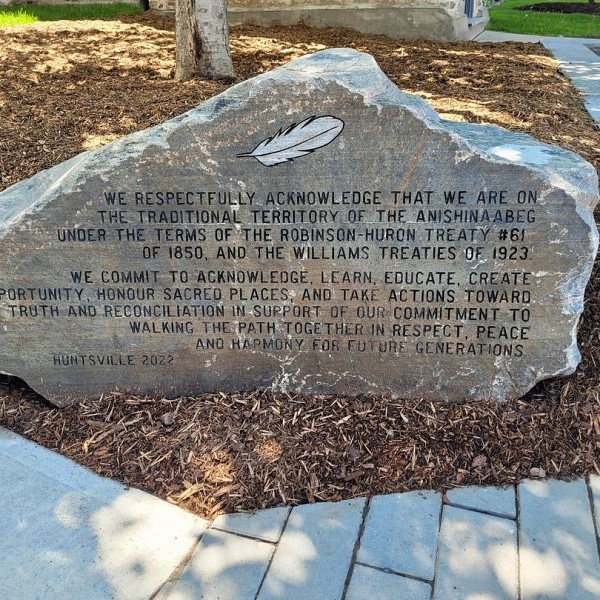 A new engraved Commitment Rock has been placed at the parkette near the Huntsville Town Hall yesterday, announced Mayor Karin Terziano in the Special meeting on June 8, 2022.

The rock is the first part of the installation of a monument in recognition of the Indigenous children of Kamloops, B. C. “The bronze moccasins will be added soon,” announced Terziano. They are a symbol of honour for the children of the school.

The goal of the Town is to contribute to the healing journey and reconciliation process of the Indigenous community.

Terziano added, “The installation will be a lasting reminder that we are on the traditional territory of the Anishinaabeg, an acknowledgement of the tragedy of the residential schools and a commitment to reconciliation.”

Out of respect, the Town will have a formal ceremony for the monument after the National Indigenous Day, on June 21, which will be announced soon.

In a discussion with Terziano, she said, “It’s to educate and promote, and provide a way so that people can recognize, gather and reflect.”

The rock was locally sourced from Huntsville, and the moccasins were provided to the Town by resident Joyce Jonathan Crone, from her Mohawk reservation, and then bronzed over the winter to be installed on the rock.

“The monument has been created in consultation with the Cultural and Heritage people at Rama. We wanted to do it right,” adds Terziano.

The District of Muskoka is asking residents to help them fight â€śfatbergsâ...

Hunters Bay Radio is Muskokaâ€™s not-for-profit Community Radio Station and the only radio station in Muskoka that is truly locally owned. We operate with a contingent of over 50 staff and volunteers. We fill a void in the local media by providing a wide variety of music and community programming, not otherwise available in the region.