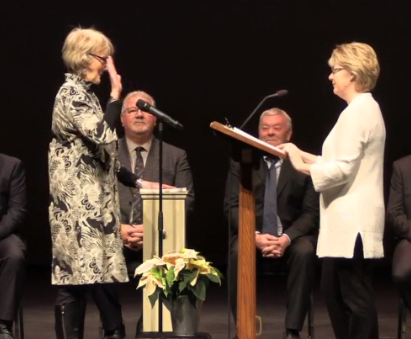 The Huntsville Inaugural meeting was held on November 21, 2022, and the new Mayor, Nancy Alcock, and Council members were administered the Declaration of Oath of Office.

Guest speaker, Chief Ted Williams, of Chipewas of Rama First Nation, acknowledged the new Mayor and Council members. He said he had the opportunity to develop relationships with municipalities in the past through the Muskoka Area Indigenous Leadership Table (MAILT) with “the purpose to get to know each other and work on things of mutual concern.” He added, “You would be hard pressed to find this kind of relationship of mutual, satisfaction between the First Nation communities and municipalities.”

“I defy you to go anywhere across the country to find this kind of relationship that we developed over the course of the first three years,” said Williams, expressing enthusiasm with his relationship with the new Mayor and Council moving forward.

Alcock began her speech by expressing appreciation to former Mayor, Karin Terziano, “for leaving the Town in excellent shape.” She added, “We will all be certain of holding this trust with great pride and care.”

“In this election, however, it was also clear that our community asked us to listen and act on issues with respect to inclusion, accessibility, equality and frankly, the basic essentials of life,” added Alcock.

The Mayor also indicated that this election was unique given the level of engagement from the community, with important concerns raised, including that Council be inclusive in decision making, improve transportation within and between municipalities, increase housing, climate adaptation, maintain and enhance recreational areas and infrastructure, and to keep up with the demands of the senior population, youth needs, and shortage of health care professionals.

“We heard that you love Huntsville deeply and are worried that development pressures may put too much strain on our natural resources…that it will be done in a balanced way, knowing our precious resources – our lakes, forests, and wetlands – will be preserved,” said Alcock.

Alcock concluded that the community will be made aware of the progress Council is making. She said, “It’s all about engagement” and added that once new committees are formed, “we will call upon community members to be part of this process.”