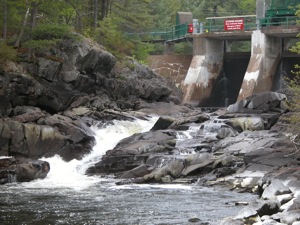 The recreational use of South Falls and Trethewey Falls in Bracebridge, is dangerous according to Ontario Power Generation’s Malcolm Bates.

During the Bracebridge council meeting, held on March 24th, Bates, the manager of work centre and maintenance for OPG, told councillors that the spillway structure is what makes the falls unsafe for public use. It opens and closes, controlling the levels of water based on functionality needs.

Councillor Archie Buie says, “the (Trethewey) signage is something like four feet by six feet, and I can read it from a football field away easily,” he said. “But that still doesn’t stop people unfortunately from canoeing and kayaking right to the foot of the waterway.”

OPG proposed that they create better educational signage with images that show what the falls look like when the spillway is open and closed. The hope is to effectively educate and deter people from using the falls for pleasure.

Bates says that the demographic of people using the falls are out-of-town visitors. The falls are being promoted on social media for cliff jumping, canoeing and kayaking, with specific instructions on where to park and how to access the falls. In addition, they are advertised on Google as a traditional waterfall, making people believe it is safe to access.

A decision to move forward with increased signage has not yet been made.