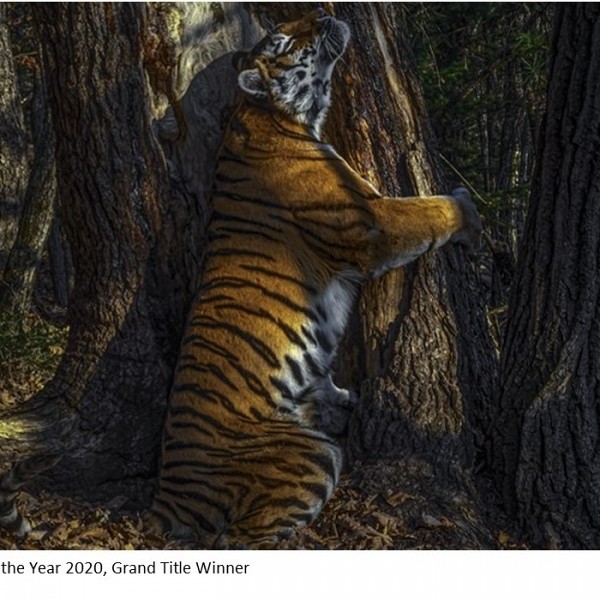 The Embrace, a stunning photo of a Siberian tiger hugging a tree, won the man who captured it the Wildlife Photographer of the Year grand title from the Natural History Museum in London, England.

Russia’s Sergey Gorshkov spent several months – 10 to be exact – finding the right spot to set up a camera trap in the natural habitat of the big cat. Eventually he did and he set up shop.

About a month later, Gorshkov’s persistence and patience paid off with The Embrace. Gorshkov used a Cognisys camera-trap system with a Nikon 27 50mm f1.8 lens, shooting at 1/200 sec at f6.3 with an ISO set at 250.

Siberian tigers – along with some other big cat species – are known to exchange information with one another by leaving scent, hairs, urine and other markers on trees and other areas.

There are only 500 Siberian tigers left in far east Russia – a fragment of what the population once was – and they are close to extinction due to habitat loss and poaching.

“Hunted to the verge of extinction in the past century, the Amur population is still threatened by poaching and logging today,” explains Dr. Tim Littlewood, Natural History Museum’s Executive Director of Science and jury member, in a press release. “The remarkable sight of the tigress immersed in her natural environment offers us hope, as recent reports suggest numbers are growing from dedicated
conservation efforts. Through the unique emotive power of photography, we are reminded of the
beauty of the natural world and our shared responsibility to protect it.”

Young Wildlife Photographer of the Year 2020 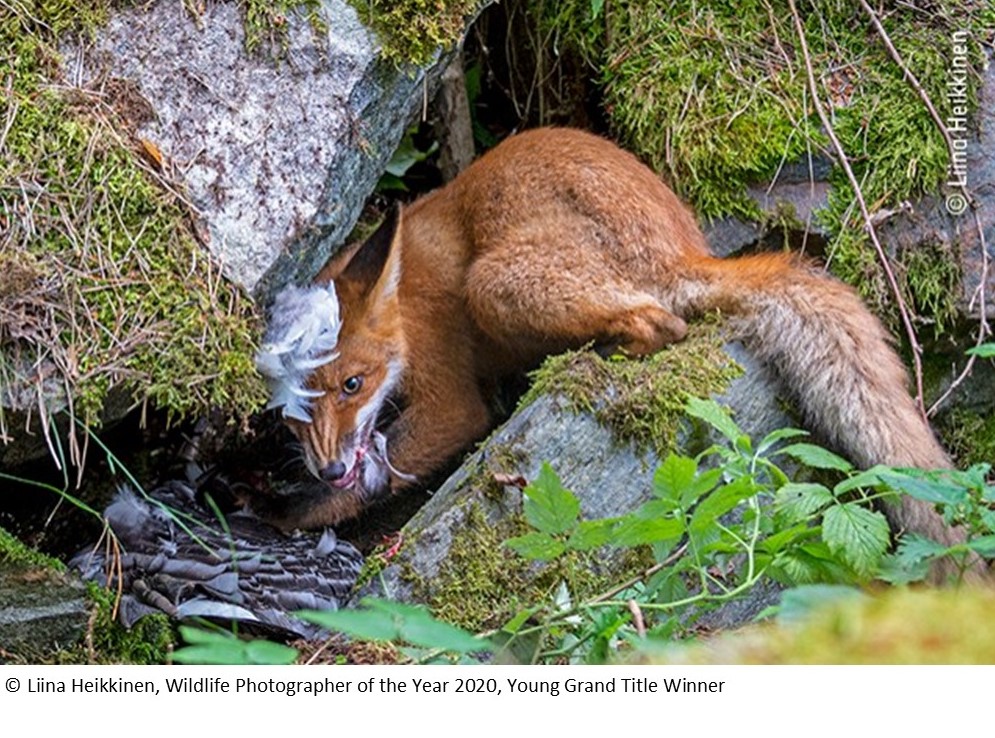 Meanwhile, in the youth division, Liina Heikkinen of Finland won the award for Young Photographer of the Year with her photo The Fox That Got the Goose.

The youngest in a family of photographers, Liina and her dad spent a day on a Helsinki island known to be a favourite of foxes. They watched a particular den, as a pair of fox adults dutifully left and returned several times with food for their hungry cubs.

At one point the parents brought home a barnacle goose and the cubs fought over it. Liina ended following the winner as it claimed it’s prize.

“A sense of furtive drama and frantic urgency enlivens this image, drawing us into the frame,” says Shekar Dattari, wildlife filmmaker and jury member, via press release. “The sharp focus on the fox’s face leads us straight to where the action is. A great natural history moment captured perfectly.”

Open to photographers of all ages, nationalities, and abilities, the next Wildlife Photographer of the Year competition opens for entries on October 19, 2020. Important new categories focussing on people’s impact on the planet, and the new jury have just been announced.

Entrants aged 17 and under may enter up to 10 images for free. Find out how to enter: www.nhm.ac.uk/wpy/competition