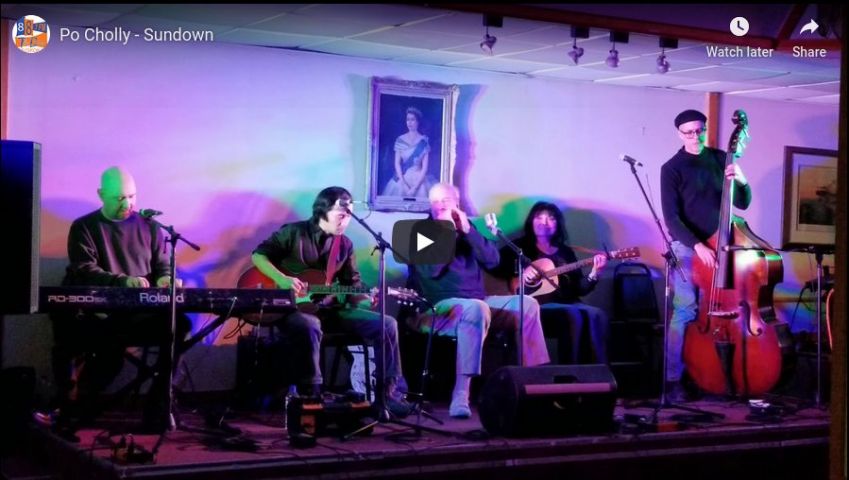 A few weeks ago, folksinger Beverlie Robertson contacted my wife Shauna and asked if I would open for her husband, Po Cholly Robertson at an upcoming event to be held at the Huntsville Royal Canadian Legion. I was one of a series of free concerts, sponsored by Hunters Bay Radio, The Bay 88.7FM, and for the benefit of the community. I don’t regularly perform in public, but while I a little hesitant to do so,  I could not turn down this wonderful opportunity. I was honoured to be asked by Beverlie and Charlie who are both legends in Folk and Blues music circles. As well, I would be playing in front of most of the musicians featured on Po Cholly’s recently released album, “LATE ONE EVENING”, a cd produced by Huntsville’s own Mighty Lopez (Michael Phillips). These uber-talented musicians included Juno Award-winner Julian Fauth, a Blues legend in his own right, along with his friend and collaborator Ken Yoshioka, a very gifted harmonica and Blues guitarist.

Saturday night rolled around, and I figured there would be 30 or 40 people at the Legion, but the place was packed. There were well over 150 people in the room, spilling over to more attendees in the bar area, and Shauna Leigh Taylor and I were thrilled (and a little nervous!). I stumbled through my set of original songs after which Po Cholly and his friends took the stage. Playing to an enthusiastic and receptive audience, they delivered an excellent set of Blues and Folk songs, including both originals and covers. The musicians took turns performing, sometimes alone and sometimes accompanied by one or more of the other players. Po Cholly’s stories were humorous and entertaining, and as always, he convincingly delivered his authentic take on traditional Blues. Beverlie, once a member of the well-known Folk ensemble, The Chanteclairs, and colleague of some of the most famous musicians ever to come out of Canada (i.e Joni Mitchell and Gordon Lightfoot), played one of my favourite covers from the “LATE ONE EVENING” cd,  “Love Me Or Leave Me”. While I’ve featured Julian Fauth on my LYRICAL WORKERS radio show more than a few times, I’d never before heard him perform live. He played wonderfully, and I certainly understand why he is a JUNO winner. The authenticity with which he (and really all of them) delivers the Blues is inimitable. His long-time musical colleague, Ken Yoshioka was probably the biggest surprise, most notably for his skills on the harmonica. Ken accompanied his fellow musicians on practically all the songs in the set. His original Blues compositions, his guitar work, and his excellent harp skills were a pleasant surprise. Of course, the Mighty Lopez, producer of the cd, is a staple on the Huntsville music scene. He played his somewhat autobiographical original song, “Hard Time Of Year”.  All in all, it was a great evening of music, delivered passionately and honestly by accomplished musicians and songwriters who understand the difference between simply performing, and delivering. Po Cholly and company delivered, and a packed house of delighted locals appreciated their efforts, loudly crying for more even after the encore.

On Friday April 3rd, shortly after midnight, the Huntsville OPP conducted a...

Blitz Nails 18 Speeding Drivers On Hwy 11 In One Day

On Thursday Bracebridge and Huntsville OPP combined their efforts to addres...

Yesterday, Dr. Charles Gardiner, the Chief Medical Officer Of Health at the...

A group has launched a GoFundMe campaign to address a critical shortage of ...

Gravitational Effect Could Make You Feel Like You're Floating At 9.47am