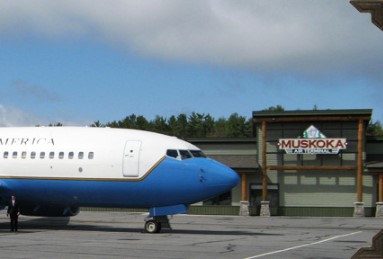 Property owners, Gerald and Rosie Cook, have hired lawyers Lee, Roche and Kerr to represent their concerns to Len O’Connor, the Chief Executive Officer of the Muskoka Airport. They are worried about the possibility of the airport purchasing and using their lands for a new grass runway on their farm at 1188 Campbells Road in Bracebridge.

In the District Council meeting on July 18, 2022, family member Carey-Anne Oke-Cook expressed concern about this 59-year-old family farm, and that the water source for their cattle will be impacted if there is a disruption on it, and regarding a memorial on their property for “a family member that perished in aircraft 9 years ago.”

Cook said, “Boundaries have been breached on the survey-owned lands.” She added that the airport “needs to stay within ownership of their lands and properties. Respect the Cook’s wishes.”

The District has also received letters from other property owners regarding concerns about the potential impact of 12-30 on their property.

Deputy Mayor Nancy Alcock expressed concern about the issues being raised with the new runway considerations, and said, “It seemed a good compromise and solution of the 12-30 runway…today there are serious impediments to moving forward with it.” In addition to issues about extending it, she added that it was over budget, and asked, “Is this really a viable option?

Council members considered putting a pause on the expansion recommendations and holding off on any lease agreements on the land, however, they agreed to allow the airport to review the concerns and feedback and submit a new report this fall.