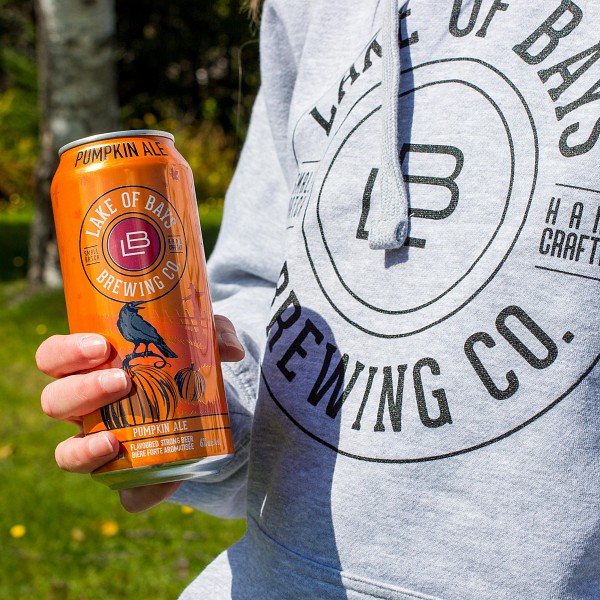 Pumpkin Ale Time Is Upon Us

October is the month for viewing fall colours, Canadian Thanksgiving, Halloween and of course sampling everything pumpkin.

Pies and other baked goods, as well as several warm beverages using the very seasonal fruit – yes, it’s a fruit not a vegetable.

Not to be outdone, Lake of Bays Brewery annually brings out its tasty Pumpkin Ale. As most people know, the desire to enjoy anything to do with pumpkins begins in late September and then dies off quickly once the calendar turns to November.

It can be a stressful time for brewers, culinary experts and just about anyone in the food and beverage industry. But the results in over the 40 or so days of pumpkin-mania is well worth the effort.

“It flies off the shelf for that short timeline,” says Andrew Walsh, head brewer for the Lake of Bays Huntsville Brewhouse. “It’s a big brew and we’re adding fresh pumpkin puree into it.”

In case you haven’t heard, Lake of Bays Brewery now has a restaurant in Bracebridge to provide more access to Muskokans seeking out the flavourful beverages and delightful dishes – ranging from their team’s takes on classic pub food to more refined recipes.

While the opening was scheduled for the spring of 2020, the world’s pandemic situation caused a slight delay and they finally started welcoming customers in late August. So, far it’s been well received, says Walsh.

Right now, they’re supplying the beer from their other two locations: the flagship Lake of Bays Brewing Company in Baysville and popular Huntsville Brewhouse. Lake of Bays products are also available through the Beer Store, the LCBO, grocery stores and select retailers.

“We’re doing food service there and the actually on-site brewing will begin in the coming months.”