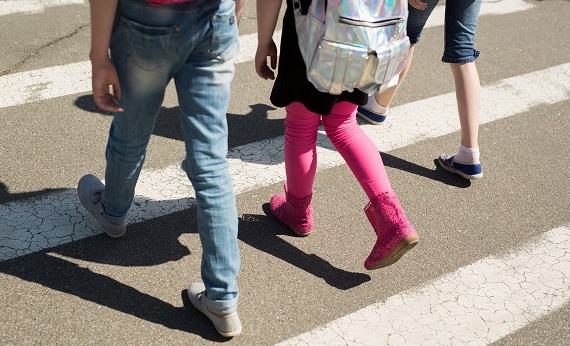 Huntsville Public School teacher, Sarah Thatcher expressed concern about the crosswalk at Huntsville Public (HPS), at the intersection of Caroline and Centre Street, in the June 29th General meeting, representing a petition of over two hundred signatures.

Thatcher said the lack of visibility of the yellow lines is making it unsafe because drivers don’t know there is a crosswalk next to the school. She said, “My husband and I almost got hit by a vehicle last year.”

“Students at the school cross at lunch and after school every day,” said Thatcher, adding, “Other times teachers have difficulty ensuring safety on trips.” She said she was told lines would be painted by spring, however, it hasn’t happened.

“What will it take for Huntsville to prioritize safety?” said Thatcher, suggesting that Councillors make crosswalk painting an annual or semi-annual priority to consider which ones need attention, especially in August – before school starts.

According to staff, the crosswalk had been scheduled to be painted after next week, and that conditions such as rain slows the process, as proper conditions are needed.

Upon further discussion, Council agreed to prioritize road painting and install signage in that area, and further consideration will be given to a standardized approach for Town crosswalks in future meetings.