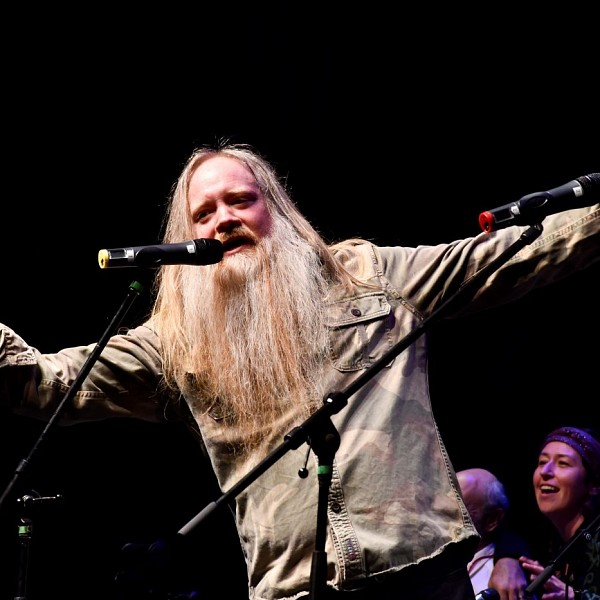 Sean Cotton is a musical friend of Hunters Bay Radio and has been since its inception. He has been a host of Talent on the Bay, he has introduced multiple gifted local song writers and storytellers to the Bay88.7FM, as well as being a musical director for some of the most successful fund raising events in the BAY’S history - notably, The Last Waltz, The Beatles White Album and Joe Cocker’s Mad Dogs and Englishmen shows. Sean is a consummate musical talent, inspiring songwriter and a recognized record producer of the highest caliber.

While the COVID-19 virus has affected every aspect of society, the arts and particularly musicians have been dealt a huge disruption in the capacity to earn a living and support their families.  The Muskoka and Almaguin Highlands area is a thriving centre for working, professional musicians such as, to name but a few Merv Mulligan, James Gray, Papa John Witterick, the Mahone Family, Michael Phillip Lopez, Tobin Spring, Marion Linton, Jeff Stamp and Sean Cotton.

Sean Cotton is and has been a vital force to the music scene in Muskoka over the past decade. While there was an established scene of working music in the area, Sean has worked hard to build his own brand and career but he has also been instrumental over the years in supporting emerging and lesser-known artists.  He has sought in his own way to help many young talents and older semi-pro players to find venues and opportunities to showcase their gifts.

His most recent conveyance for developing local talent is the creation of River Mill Records in Burk’s Falls, which was launched over the course of 2018. Sean has worked closely with existing areas studios and producers, most notably with Andre Wahl who is responsible for the extraordinary success of country star Paul Lagendyk and Pam Miller. Sean did an enormous amount work at Ghetto Blaster Studio in Bracebridge before he began his own production company. Since its inception, River Mill has seen hits from Overplay, Jamie Oppenheimer, Joe Thompson and Sawyer Lance, to name a few.

Sean has been an integral force in live music and development in Huntsville especially and Muskoka at large for many years. His early support and continued activity with Hunter’s Bay Radio, the Muskoka Rock Choir and Algonquin Theatre in various productions were groundbreaking. Early in the 2010’s he threw his prodigious talents behind the efforts of local events ranging from the Burk’s Falls Jamboree to Bracebridge’s annual Fire and Ice winter festival. Sean began Tree Ring Records as an attempt to collectively represent the vast array of songwriters and performers throughout the area. Tree Ring, in its own way, helped establish many of the songwriters who have been heard over the past five years on local radio and international Internet radio stations, such as Gina Horswood and James Jones.

Sean Cotton is a highly developed musician – songwriter, extraordinary guitarist, and powerful versatile vocalist.  He began his professional life in 1990, when he decided that, rather than go off to university he would devote his life to being a musician.  Initially Cotton worked for years with an Indie band called Shadows of Laughter, a power trio of moody Art Rock. The band eventually disbanded when the challenges of sustaining a successful act were dashed by a blizzard that prevented them from opening for the Headstones.

During this period Cotton began a formidable partnership with Corin Raymond, who later became known as The Undesirables, an unusual name choice given the success they were to experience and their creative song writing, which exalted their respective talents to the utmost degree. Over a 6 year period, the duo performed throughout Ontario’s club circuit, building a devote following. As the club circuit began changing, the band began to falter and Sean Cotton began the next chapter in his development by enrolling in Humber Colleges Jazz Studies program, where he expanded his musicianship especially in regards to electric guitar.

While Cotton and Raymond have maintained a song writing relationship over the years, Sean went on to work in a myriad of bands with remarkable vocalists such as Suzie McNeil.  After forming his own band for a period, Sean reunited with Corin Raymond and worked successfully for another10 years, touring extensively as The Undesirables. Somewhere along the line Sean found time to tour and work with Treasa Levasseur and Marshall Dane.  During all this astounding musical activity, Sean acknowledged the pressures of raising a family and moved to Burk’s Falls. He tried to uphold his commitments to bands in southern Ontario but soon found the travel and work load was more than he wanted and so he chose to make the Muskoka his base from which he has built a steady following and bourgeoning prosperous career playing pubs, local festivals and specialty shows.

Cotton is beyond skilled as a working songwriter-performer. He is a gifted singer and as a guitarist seems to know every song written, be it folk, rock, funk or country Sean is able to play fluently in almost any genre allowing him to serve as a musical director for various projects, as well as perform in a broad range of venues. While he has several records to his own name, his most recent album is, Only In Muskoka, which features many of his renowned anthems to Muskoka life such as Living on Muskoka Time. only in muskoka - Sean Cotton

Even though he is known as a performer, perhaps his most enduring and lasting legacy will be his selfless work as a mentor and promoter of local songwriters, singers and performers, all of whom have greatly benefited from his generosity of spirit and love of song. Like so many talented musicians right now his earning capacity to support his family is severely curtailed but for Sean Cotton this is definitely not his first rodeo and he has found a way, especially through his various projects, to keep his creative fire burning brightly – ever more brightly.

Go out and support the music in what ever way you can!

Find out more: with links to album purchases.

Written by Douglas McLean, a local musician, writer and photographer living in Kearney.