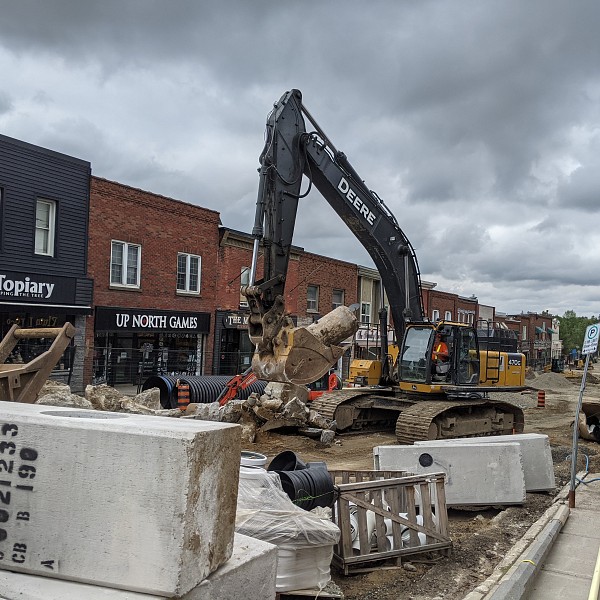 The Impacts of Diggin' Downtown on Main Street Businesses

For residents of Huntsville, the Diggin' Downtown project has caused some inconvenience with detours bloating traffic, but what of the businesses downtown?

We spoke with several downtown businesses: Algonquin Outfitters, Affogato Café + Gelato, and The Record Shoppe. Here's what they had to say.

"We've been keeping very busy," said Randy Mitson, Marketing Director at Algonquin Outfitters. For them, it's a matter of location and timing. While walking down the dusty mainstreet may be unappealing to potential customers, Algonquin Outfitters are fortunate enough to have a back entrance. This combined with the approaching summer, easing of pandemic conditions, and eagerness of everyone to get out of the house has allowed for a fruitful sixtieth year in business for them.

Of course, high demand and low supply due to the pandemic mean that much of their supply for the year has already been preordered.

At Affogato Café + Gelato, they too have been seeing an unexpected boost in business since the Diggin' Downtown project began. With Main Street less accessible, residents and new tourists are driven to different parts of the downtown area, one of which being the riverfront where the café is located. Additionally, the timing of it all has given the café the time it needed to open another location in Dorset.

General Manager Nicole Metz says that her and the team at Affogato are looking forward to what could be one of their best summers yet.

Not all businesses are so lucky, though. Some have had to adapt.

"If the town can't get to us, for whatever reason... well, we can get to the town," explained Trevor Marshall, one of The Record Shoppe's two founders. The Diggin' Downtown project has cut off a fair amount of traffic that would normally find its way into the shop. Without a doubt, that's only one component with the other being the current lockdown. Either way, The Record Shoppe has been offering delivery to those in need of good music.

But as with any niche interest, The Record Shop has its loyal base of customers and is still looking forward to Record Store Day on June 12, which Marshall describes as being like Christmas for record shops and enthusiasts.

Here are a series selected short clips from our conversations with some of the downtown businesses. Included are some advice on how to make the most of your summer, expansion on the excitement for Affogato's summer this year, and the importance of music during times like these.