The Ongoing History Of The Bay Pt. 3

James Carroll wouldn’t leave – except when it was time for him to spend some time with his beautiful daughter, Emma.  The rest of the time, you’d always find him at Hunters Bay Radio.  He was “the” guy.

He was often thought to be the founder of the station, even though he joined us sometime in 2010, nearly a year after we launched.   He quickly fit in, after all, he had been a DJ early on in his career. 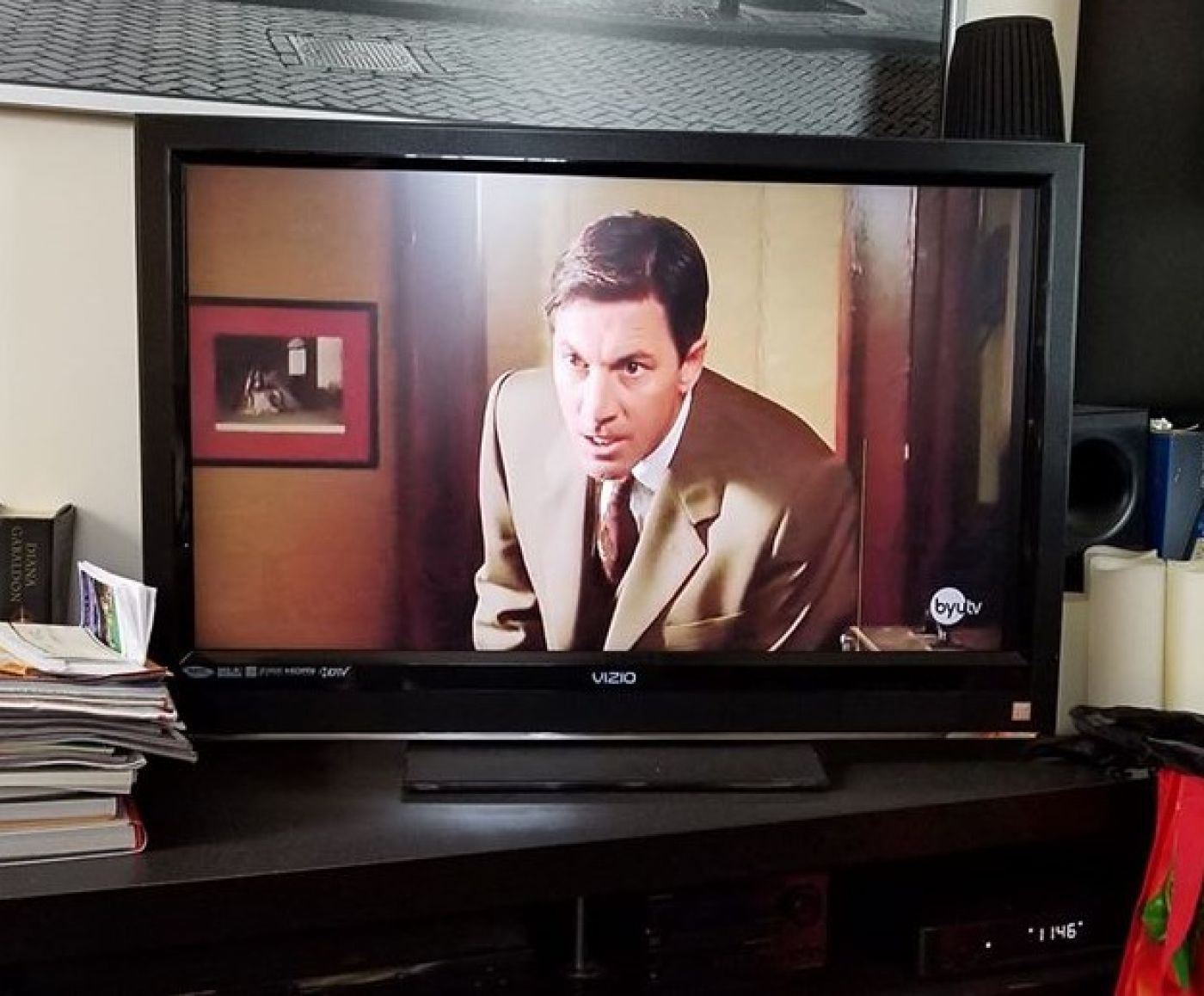 I remember first meeting him when we were in the little studio in the basement, broadcasting to the world on the internet.  When Grant Nickalls first introduced him to me and we explained that we wanted him for a couple of hours a day, he muttered a phrase that stuck with me to this day.  “I’ve got to get me some of this action,” he said.

And so it began, and despite his previous experience as a DJ, he had to learn it from scratch, because we were a computer based radio station – and I’m sure he was used to spinning vinyl – even 78’s as I would sometimes joke.  But the reality that more often than not, when something went wrong, James was at the controls and the air was blue in the studio – not so much on the airwaves.

He was in good company, because we were all learning and screw-ups were plentiful by everyone.  He was a fast learner, but short tempered when it came to technology.

He would take on new projects as I came up with them – new shows like The Countdown, which I would produce and he would host.  He made the show sound very convincing, putting it together ahead of time for playback later that day.  As a listener, you might even think he knew those “cats” in the band, but the truth was, he’d never heard of them and hadn’t even heard most of the songs at point.  And because we were on the internet, he’d never heard The Countdown because he didn’t have internet at home, or a computer for that matter.

All of that didn’t stop James, because he was an accomplished actor, choosing to spend time with his daughter over success that he rightfully deserved.  He was the lead in the CBC show Wind At My Back for eight seasons.  He’d made lots of films as well.  He sure was convincing when talking about the newest band from Toronto or wherever.  And he did it all without hearing a beat of their music.  He was like that for all his shows.

I’ve always scoffed at celebrity, but James had talent and I learned that quickly after watching him guest on Talent On The Bay with Grant.  The pair of them did a bit I remember to this day, that just amazed me, at how they could deliver a fast paced skit and make it sound real despite all the fakery going on in front of my eyes.  That’s when I came to appreciate the talented actor, James Carroll.

James worked hard, right up until 3 o’clock, when it was time to head out and pick up his daughter.   In anyone given day, he’d come in to do On This Day and would be able to answer some of the hardest questions without breaking a sweat.  Then he’d lay down some obscure reference and we’d all be blown away by his intellect.  At least I was.  I often felt dumb working with James.

Besides being smart, James was funny.  He could deliver a line off the cuff on almost any subject.  He had such a quick wit.  He was also kind, taking time for anyone.  James would never say no to anyone – it was his gift or curse, but a kinder, gentler man you would be hard pressed to meet.  He always had time for you.  It would often take him an hour to walk home, which was only 15 minutes away.  He always had an encouraging word for anyone – especially volunteers and musicians.

But I don’t want to make you think he was a saint, because he wasn’t.  James had his demons.

Despite his issues, he was Hunters Bay Radio – at least that was the perception.

So it became hard once he got sick – and he was sick for awhile before I finally got him to go see a doctor.  The news was not good.  He had cancer.

We all worked together to cover for James when chemo and radiation started, as he would be away for weeks at a time.  I began taking back some of the day to day jobs that he used to do.

As the illness progressed James became more emotional, working through his emotions with his “guardian angels”, Shauna Leigh and Jamie.  Catherine Cole took control of his medical requirements.  I can’t say enough about how James came to depend on them for support as his health deteriorated and they were there for him. One day, when he came into my office, I tried to ask what he wanted to do with the time he had left, but he wasn’t ready for that talk.  He turned away and walked out of the office.  It was a tough thing to talk about, but I’d rather he spent his time with his family than hang around the radio station when there was precious little time left.  We never finished that conversation.

The station helped co-ordinate a fundraiser at the Algonquin Theatre spearheaded by Ken Cole, bringing back some of James’ actor friends from Second City and Wind At My Back. If that wasn’t enough, the surprise at the end of the night was the premiere of Gina Horswood’s new song with Paul Lagendyk called Radio Man, produced by local record producer Andre Wahl.   I remember Gina was away for the show, so we had her record her part on video with Paul joining her from the stage.  It was pretty amazing, but the most remarkable part of the whole thing was how James handled the whole thing when it was over and he was surrounded by friends and fans.  He radiated sincerity, and humility.

It wasn’t much longer that his health took a serious decline.  He still insisted coming into the studio to do as much as he could and he wouldn’t stay home, so while he was able, he came in.

Then one day, in he came, dragging along his oxygen tank clearly in pain, unable to sit or do any of the jobs that he wanted to do.  He had stopped taking his meds, so he would be clear headed at work.

It was clear then that his time working at the station had come to an end.  We called Catherine Cole to take him home.  That was a sad day, something I had been dreading for some time.

We left his time slot without a host, hoping against hope that a miracle would happen.  At that time, the National Post sent in Jake Edminston to chronicle the dire situation.  Huntsville’s radioman was going to have his story on Page 3. 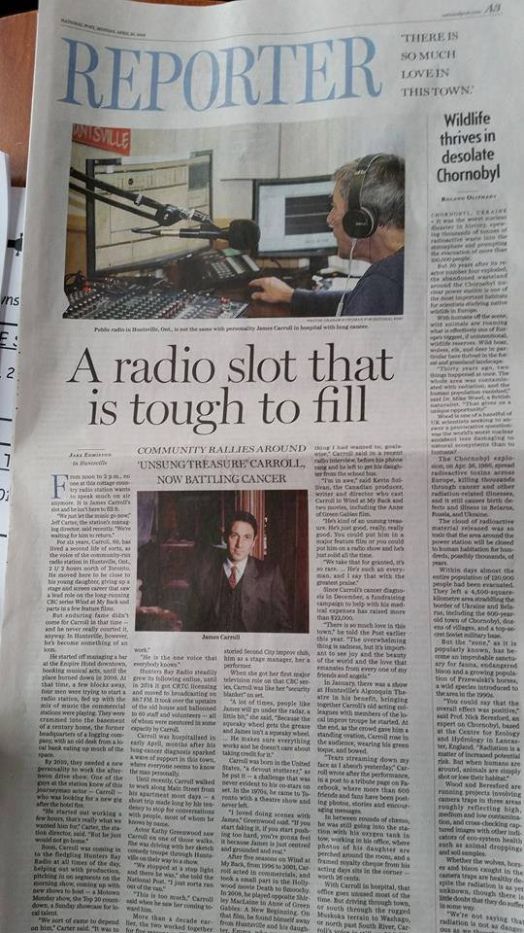 When the story hit the broadsheet, James was in the hospital.  The headline read: A well-love man: Meet the accomplished actor who left Toronto and became famous in a Small Ontario town.

We were thankful that James got to see it, as his health was deteriorating quickly.  In fact, it was only after a week in hospital that he confided in me that he was dying.  He said “I’m going on a trip.”  That was the first time he acknowledged his mortality with me.

Soon after that he was moved to Hospice and we were all there with him in his last days.  I would visit every night, chatting or just sitting watching baseball with him.

Catherine, Shauna, Jamie, Grant and I were there with Erin and Emma when James passed, while Erin and Shauna held his hands.  All the time, Hunters Bay Radio was playing – Wendell Ferguson was playing live in the studio - and James closed his eyes for the last time, listening to himself flogging pizza to his listeners during the break.

The next day was brutal, but we had to soldier on.  I read the news of his passing every half hour that morning, barely getting through it.  We played a variety of music that fit the moment and received tons of messages of condolences from listeners, shocked at the news.   I remember one woman coming through the back door, getting half way up the stairs in tears.  When I invited her into the studio, she just said “you’re playing Wish You Were Here for James,” started crying, and turned and left. 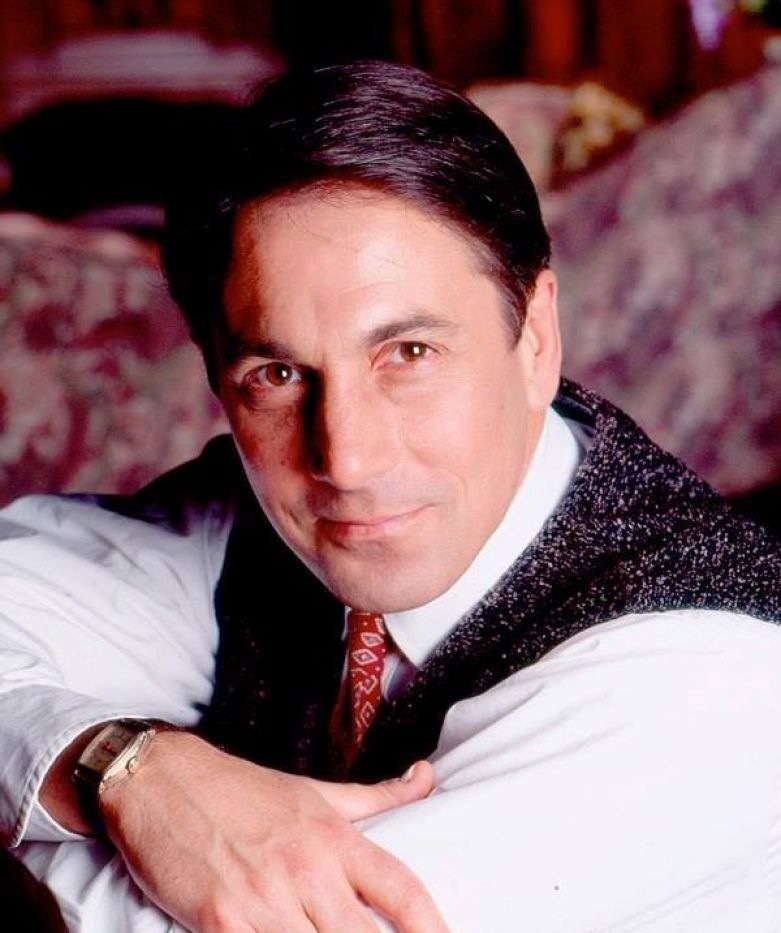 That summer, thanks to Jamie & Shauna, we installed a granite bench on the front yard dedicated to James as well as planted a tree outside his office window.  We invited the community to come out at his celebration of life and help spread his ashes.

After James died, it triggered a sea change at the station – Grant came back – something James had wanted.   Also joining us was Jacob Kriger who volunteered after James got sick and was in hospital. He’s as kind and patient as James was, so it was a good fit. Sarah Coombs would join a short time later.

I think James would be happy with our team and how we’ve progressed.  Still, every time we have a technical glitch, we know who’s behind it.   He’s still with us and always will be.