2020 has come to a close and its been year that most of us would rather forget.  However, the late Kareen Burns made a return on Christmas Eve, in the form of spam in my email.

I normally get hundreds of emails a day, and I have a pretty efficient delete button as I peruse through the list of emails quickly deleting stuff that I don’t want to see.  But, one day, just before Christmas, in between the time I that I pressed the delete button and the time it took my computer to delete the offending article, I saw a face that was familiar, and I was pulled back.  So I undelete the email to take a look at the face that is drawing me back.

I was shocked to see it our own Kareen Burns face in an email pitch to buy a JibJab video or dozens of them, with her face imposed in each screen shot of the video. 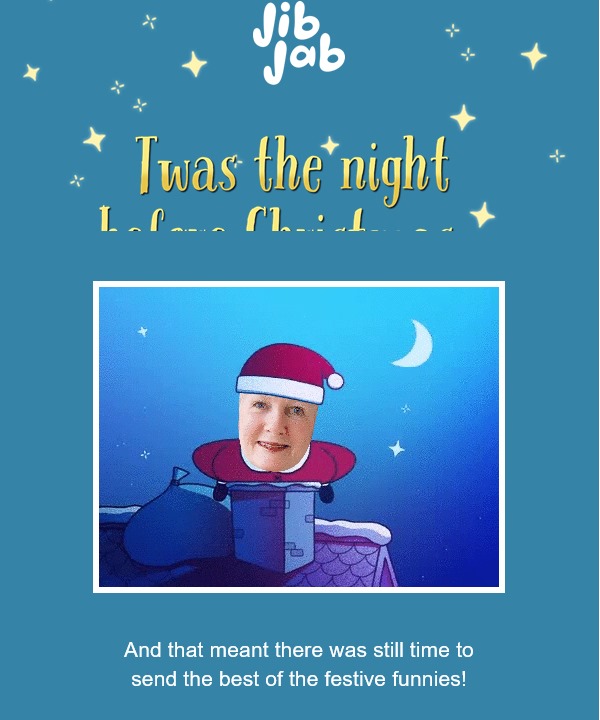 Now, whether it was just a fluke, or somehow JibJab knew who are (were) my friends on Facebook and randomly selected hers, or they just happened to send that email out to everyone including me, or it was Kareen herself doing this I can’t say.  I’m inclined to believe the latter.

Kareen was well known in town, the owner of Swiss Chalet for a number of years, a patron of the arts and a driving force behind the Huntsville Festival Of The Arts.  She was also one of the first show hosts on Hunters Bay Radio.  She was an enthusiastic volunteer who was always ready for her show – an hour of talk – live in the mid morning.

She was super inquisitive, and always found interesting people as guests and the show seemed to be over shortly after it begun, but an hour had passed.

Kareen was struck down by cancer on June 2nd, 2017 – and it wasn’t the first time she battled the disease, but every time she did, she faced it bravely, stubbornly in charge and in good humour.

About six months before we knew she was sick, she recorded a myTunes show, a show she called “Death Music” full of songs that meant something to her.  Over the months, she pestered us to make sure it was finished – we thought there was lots of time – she wanted it done.

Then in late April or May, she got sick and the disease would quickly move through her body and she ended up in hospice.  Her family were called and everyone held their breath.

A couple of days earlier, I went in to say my last goodbye and while she wasn’t able to communicate, I kissed her forehead and said thank you, I’m positive that she tried to speak to me.

A few days later, it was a Friday and her show would go at 11am – its usual spot and in place of a live show, we would play her “Death Music” show.  Kareen and her family would be listening in.  She was close to death and during her show, the song “My Love is Like a Red, Red Rose” played, based on a poem by famous Scotsman, Robert Burns and she would pass.

It was the most surreal hour of radio.  It's like she orchestrated the whole thing.  To go out with a bang and she did.

At the time we were playing the show, one of her friends and a listener, Zelda came into the studio and listened to it play out.  After the song ended I got a call from Catherine Cole, who was at hospice, and she told us of her passing.  Having to go on air after the show ended to tell listeners that she passed during the show was one of the hardest things I have ever done.

So getting back to the email, shortly after Christmas, Zelda, who was in the studio during the broadcast, came into the studio and I related my story about the email and she told me she had just had a dream about Kareen, where Kareen told her she was heading off to British Columbia for tea.

So it all comes full circle and I truly believe that Kareen orchestrated her own death, live on the radio and that her spirit is all around us.  I’ve got the email with her face on it, posted on the bulletin board, and a feeling that no matter how scary our current situation is, that its going to be alright.

To read other excerpts in the Ongoing History of The Bay,  Click here: https://muskokaradio.com/featured/