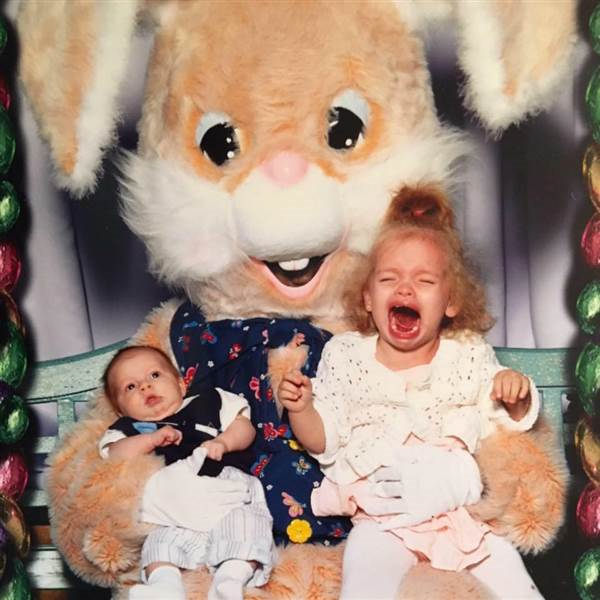 Random thoughts. I hope you all had a Happy Easter. Who dreamed up the Easter Bunny? That is a weird concept and, like Santa, I think it scares some kids. There are scores of old photographs depicting little children crying when forced to have their photos taken with the Easter Bunny. “No Mommy, don’t make me sit on the giant rodent’s lap!” When I was a little boy, we used to decorate Easter eggs and Mom would hide them around the house. One year, we didn’t find them all. Several months later, there was a terrible smell coming from the living room, and we discovered that the missing egg was hidden in a lamp. That was the end of our Easter egg hunts.

A musician friend sent me an image the other day of a painting done by singer/songwriter (and painter) Joni Mitchell. It was a self-portrait she used for the cover of her "Turbulent Indigo" album. The painting depicts Joni wearing a bandage over her presumably missing ear. It is a spoof of one of Van Gogh’s famous self-portraits, and in a biography I recently read about Mitchell, she said that she painted that album cover as her tongue-in-cheek statement about the lack of recognition she had received for her large body of work. While she is famous for her “Blue” album and some of her earlier work, all told, Joni produced 17 albums. Many of those albums are musically complex, brave, and interesting experimentations in a myriad of styles. She faced a lot of criticism for producing them. Joni Mitchell is one of my favourite songwriters, and I am astounded that, while she won 4 Juno Awards over the years, none of those awards were for song or songwriter of the year.

The 2021 Juno Awards are coming up in May and, like many other music lovers, I will probably watch. I watched the Grammys and that was, as usual, a disappointment. I used to enjoy pop music, but I cannot listen to it anymore. The other night, I watched the musical guest on Saturday Night Live, a prestigious stage for any artist, and I was appalled by how bad it sounded to me; I mean offensively bad. I think any of my musician friends would agree. I found myself yelling at the TV: “Really? Is THIS worthy of international attention?!?” Of course, the argument is that pop music is generational, and one generation doesn’t “get” the music of the successor generation. That might be true, but I appreciate many different kinds of music, including more recently, some Rap and Hip-Hop. My criteria is simple: either it moves me or it doesn’t. Increasingly, I am finding that today’s "popular" music does not, on any level, move me. I’m not sure whether the digital era has diluted and devalued pop music to the point where it has become disposable, flavour-of-the-month crap, or that the business has simply devolved into a competition for the best marketers. Rock star Peter Frampton reportedly received a paltry $1700 in royalties from Spotify for a song of his that had 55 MILLION plays. How is that fair compensation? They say you get what you pay for. I suggest that, alternatively, you don’t get what you don’t pay for. This does not bode well for musical artists.

If I’ve learned one thing from 5 years of doing research for a radio show about songs and songwriting, it is that the cream rarely rises to the top. That saddens me. I hear at least 2 or 3 remarkable songs per week, songs that astound me for their lyrical content, their musical distinctiveness, vocal performance, or whatever other intangible quality draws me to any song. I doubt any of those songs will ever be represented at the Grammys or the Junos. As Joni implied in her "Turbulent Indigo" painting, perhaps if she cuts off an ear, THEN they will pay attention.