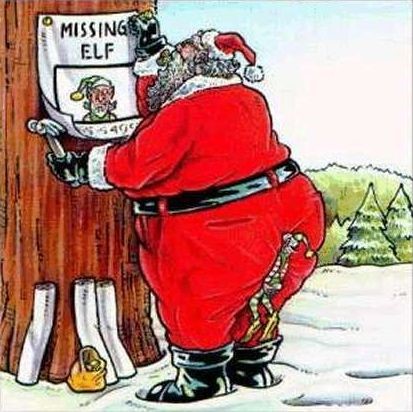 I’ve known Santa for many years. We used to vacation at the same villa down in the Caribbean. What? You didn’t think he takes time off? Nobody can live at the North Pole year-round, and let’s face it, that job is pretty stressful. One year, I remember Santa did not go south and went “Here’s Johnny” on Mrs. Claus around mid-March. She had to lock herself in the toy shed for 3 days. Of course, Santa wears “civies” when he isn’t working, and could easily be mistaken for one of the many other elder, white-bearded, fair-skinned snowbirds. I’ll tell you one thing, Santa in Bermuda shorts, socks, and sandals, and a Hawaiian shirt is not a pretty sight. I do worry about his mental health, especially this year with the pandemic, but he’s been through much worse. To follow is an Oppenheimer Report I wrote years ago which touched upon some of Santa’s past problems.

12/24/97: "Yes, only 3 more shopping days until Christmas, and the stress is omnipresent. I heard on the radio this morning that 1 in 5 Canadians polled, confirmed that given any more stress, they would just snap. Job security and financial woes top the list of stressors, but the holiday season can be the candy cane that broke the reindeers' backs.

I’ve always been sympathetic to Santa Claus, because I don’t think most folks appreciate the pressure that guy is under. It’s feast or famine with him, because he has a slow season for 11 months, and then BANG!, it’s the Christmas push. For those of you who may not have followed my Claus coverage over the past 4 years, let me bring you up to speed.

First, there was the FWI charge (flying while intoxicated) near the North Pole back in 1993. That one almost buried him. Then in ‘94, Mrs. Claus had that fling with the Kuwaiti arms dealer down in Rio. My wife said, "She was going through menoclaus". That was not a good thing for Santa’s mental health. In 1995, 2 of his key toy-making elves were riddled with bullets in a slide-by shooting. It is a little-known fact that elf gangs are about as ruthless and bloody as they come. Don’t let their size fool you; those little guys will get you down on the ground and stomp you to death. Then, this past year, there was that ugly tax evasion scandal. I don’t even think Santa should even need to pay taxes, but welcome to the real world.

This year is no different, and with the mail strikes, elf walkouts, 3 reindeer down with hoof and antler disease, 253 unsettled roof damage lawsuits in New York State alone, and the collapse of the Asian real estate market, etc., etc. Santa should be 1 chimney away from losing it.

Every year around this time, at least 1 story surfaces about Santa abuse. I'm referring to abuse TO Santa, not by him. Goodness knows there’s always some unfortunate story about how 1 of his “helpers” - you know, the ones who are dressed to look like him and work the malls and special events - gets drunk or mauls someone. In Buffalo once, and to my complete disgust, I actually saw one of Santa’s “helpers” relieving himself against a building on upper Main Street. It’s not something I want to dwell upon, but it happens, just like it happens to so many other celebrities these days. You get a little bad press and bang-zoom, you’re the bad guy (or gal). Santa can’t be responsible for all the people called upon to impersonate him, and there’s no question we need those helper Santas to assure that the Christmas machine runs smoothly. Anyhow, sometimes those helpers get abused too.

Just the other day, I heard on the news that a helper Santa had been fired from some department store after he reprimanded a bad kid for pulling his beard and kicking him in the gonads. If you ask me, any kid who kicks Santa in his balls deserves not only a pile of steaming chicken feces in his or her stocking, but also a compulsory, 24-hour, non-stop, Barney The Dinosaur video fest. Just because they’re kids doesn’t mean they can’t be evil.

Anyhow, don’t get stressed this holiday season and, if you get a chance, try and make someone besides a big box retailer happy. For all the hype, and all the artificial goodwill swirling around this time of year, there is a lot of good out there, and a lot of good people want nothing more from you than a little respect and some recognition. Be nice, call someone you know is lonely, help someone out who needs it ... and cut Santa some slack as he’s doing the best he can. Merry Christmas and Happy Holidays!"

I hope anyone reading this report has a safe holiday season. Stay connected. Try to support our local, small businesses. Take extra precautions to stay safe. Take care of your family, friends, and neighbours who may be suffering emotionally, and make the best of these hard times. I’ll be back in the new year.