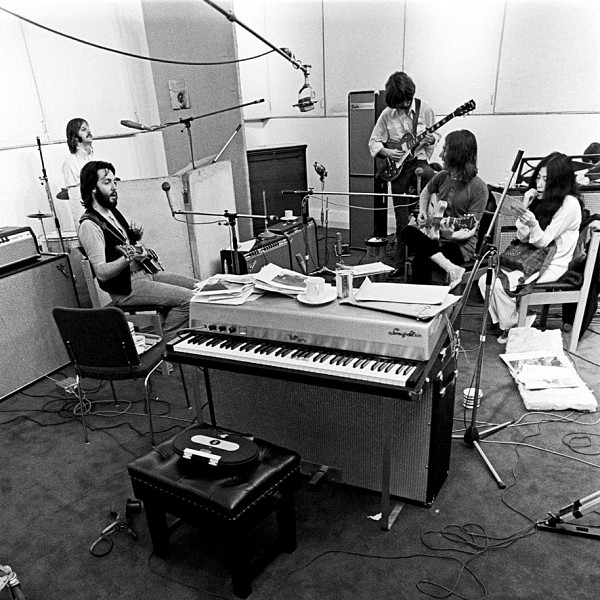 Shauna and I are presently 2/3 of the way through the Disney 3-part documentary entitled, “The Beatles: Get Back”. Produced by the very talented Peter Jackson, the movie is a more comprehensive exploration of outtake footage shot from an earlier documentary of the same title. The original project, filmed in 1969 by Michael Lindsay-Hogg, explored the 20 days of rehearsals and recording sessions that led up to the final album, “Let It Be” (originally to be titled “Get Back”). I saw the first film a long time ago, but don’t remember much about it. I do remember that it focused on the tensions between the bandmates. Jackson felt that the original film was not a complete or accurate picture of the breakup of one of the world’s greatest supergroups. Jackson had his work cut out for him, with about 60 hours of film footage and 150 hours of audio through which to sort. He spent about 4 years boiling down and editing that 60 hours into his final 8-hour miniseries. He chose not to include any footage used in the original documentary, and instead, tells a much different story with the footage he did use.

For someone who loves their music as much as I do, I know very little about the Beatles. I was never very interested in their personal lives, or their love interests, or the scandals and controversies that followed them throughout their career. I simply loved their ability to compose wonderful songs. While many critics have argued that the Jackson documentary is tedious in parts and far too long, I find it enlightening. For me, to see and hear those 4 musicians build a composition from scratch, is akin to watching a gifted artist create a painting from a blank canvas. All the things about which critics of the film complain, are the things I wanted to see.

Over 2 decades ago, we inherited a series of CDs from Shauna’s late brother, Dean Jordan Taylor, entitled “The Beatles – Documents.” I believe there are 6 CDs in all, and they include live recording sessions and outtakes from some of The Beatles' most celebrated albums. While those recording sessions are fascinating to me, and in fact I have played a few songs from the series on my radio show, LYRICAL WORKERS, they also represent a band fleshing out primitive versions of songs we have come to know and love. They are not for everyone, and some of the recordings are simply awful. This latest Peter Jackson documentary is much the same. It reveals many important things to the true Beatles fan, but most importantly to me, it records the creative process. To watch McCartney begin to develop the song which would later become “Get Back”, running through a riff, over and over again, to hash out the lyrics, is at once demystifying and also enlightening to me. Each individual bandmate contributed to the collective genius which is/was The Beatles. To hear some of the banter and their raw outtakes, humanizes them for me.

While watching this latest documentary, I noticed that those 4 bandmates behaved like brothers. Remember that they were still very young men when they broke up in 1970, and Lennon, McCartney, and Harrison had been together since 1958 (Ringo joined in ’62). Fame and celebrity can often burn bands out and destroy creativity; I’m surprised they stayed together as long as they did, much less that they were able to create the enormous body of work that they did. What I have taken away thus far from the Jackson documentary (of a documentary) is that here were 4 gifted souls who had reached the end of their creative life TOGETHER. It was clearly time to fly the coop and go their separate ways. I look forward to watching Part 3, which ends with the famous 45-minute rooftop concert. All in all, I heartily recommend the film to any fan who wants a peek behind the scenes of one of the most influential bands of all time.