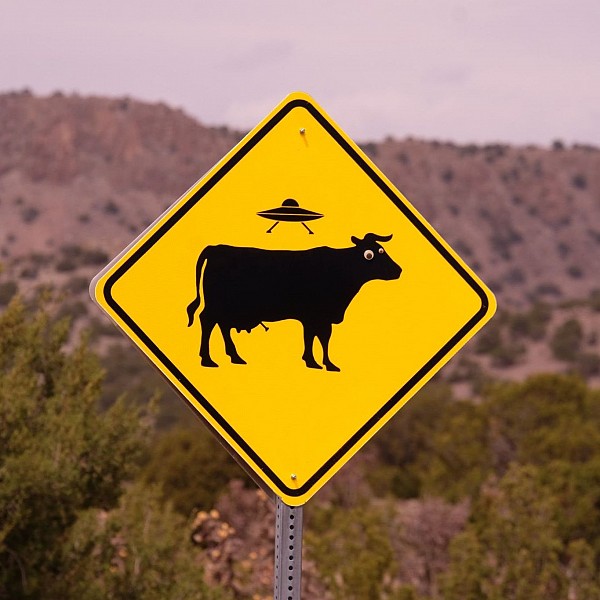 I turned on my computer this morning to check my email and to discover what crazy nonsense was dominating the cyber waves. Low and behold, there was another video of a UFO sighting. Allegedly, a passenger on some red-eye flight over the Pacific Ocean, recorded what looked like bright flashing lights above a bunch of little dots of light in an otherwise dark and empty ocean sky. My first reaction was that it was lightning, but that did not explain the many dots of light underneath. Lately, there has been more and more talk of UFO sightings, and while I am of course skeptical, who am I to say what is or isn’t out there? I’m beginning to think there is something. Just because I am myopic, doesn’t mean there isn’t life out there in the great beyond. Then my imagination went into overdrive.
What if the aliens from some far-off universe are simply using Earth and Earthlings as a science project? Maybe we’re just a Petri Dish for some unknown and far-advanced population of outer-worldly beings, a science project for alien school children. Has little Florg Spaceslange introduced a strange and deadly virus into Earth’s population, monitoring the results for his final thesis? He targeted Earth because his interplanetary research verified that we are soon to be extinct anyhow. No great loss, just more dead guinea pigs sacrificed in the name of intergalactic progress. Clearly, we humans keep re-living the disastrous consequences of our inability to learn from history and science. We don’t always get along with each other, some facets of our populations have attempted to eradicate other peoples, have let corrosive racism run rampant, have no respect for Mother Earth, wage horrible wars that eliminate vast numbers of our species, rather than opting for peaceful negotiations, and, given the opportunity, we usually find a way, either intentionally or unintentionally, to transform useful technology into weapons of mass destruction. In short, after that run-on sentence, we are our own worst enemies, and almost perfect examples of a life form bent on self-destruction. It makes sense to study those primitive flaws in order to enlighten other, more advanced organisms.
So, young Florg introduced a(nother) deadly virus into the human population, and then observed the reactions, assuming wrongly that we humans might then work together in order to survive this existential threat to mankind. Spaceslange observed the fallout from this tiny adjustment, tracking and monitoring the abysmal lack of leadership by politicians, the splintering of interest groups, and the viral spread of disinformation. He/She/It (?) takes notes as vaccines are developed but then discredited by dubious sources, observing the temporary decline in the pandemic, followed by an upsurge in disinformation, followed by unnecessary casualties. The alien monitors the slow deterioration of community and the gnawing deterioration of mental health, exacerbated by the water torture erosion of sanity, made even worse by the spread of internet and televised “news”. From time to time, it makes a flyby over Earth to make some field notes, fascinated by the confusion that sparks, as we humans react to the unfamiliar lights and energy bursts. Maybe that’s what baby loons feel when they’re swamped by a clueless jet skier.
My imagination; sometimes I wish I could turn it off. I’m having the strangest dreams lately. Early this morning, in my sleep, I was in a David Lynch movie, complete with the temporal manipulation and off-putting music. I dreamed about being late for a real estate appointment in a strange city. I used to be an industrial real estate broker. I was in a huge hotel room, I was watching TV, and I looked at my watch and realized I had 10 minutes to get to the appointment across town. I reached for the remote to turn off the television, and it crawled away from me on creepy, crawly legs. Figure that one out. I don’t know, maybe I’m finally losing what’s left of my mind underneath what's left of my hair. I’m trying to distance myself from the constant barrage of bad news, the racism and overall mistreatment of our fellow human beings, the tornadoes, the wildfires, floods, and building collapses, etc., but the Chicken Little reminders are everywhere. I’ve had to bail out my overflowing dingy 3 times in the past week to keep it from sinking, which is my personal reminder that the weather is changing. All of this is chipping away at my conscience and my peace of mind. I think an alien encounter might be a welcome surprise. Imagine the look of disappointment on their faces ... that is assuming they even have faces.
Written by Jamie Oppenheimer ©2021 ALL RIGHTS RESERVED
JamieOppenheimerSongwriter@gmail.com
JamieOppenheimer@MuskokaRadio.com
HuntersBayRadio.com