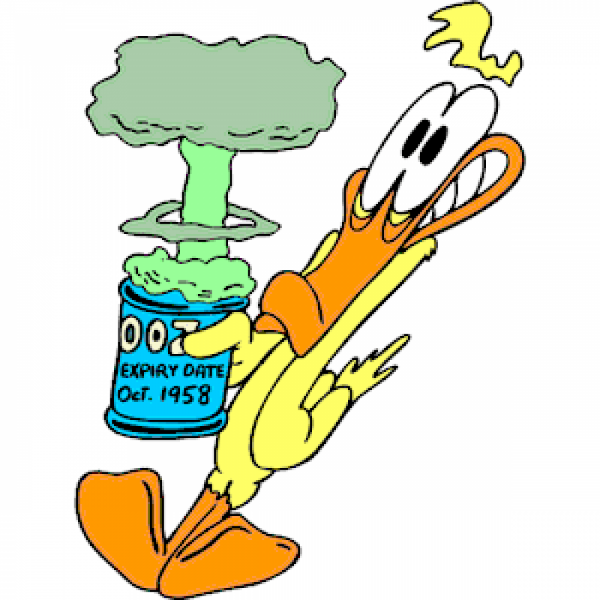 Posted: 2020-07-20 16:38:11 By: thebay
Did you ever purchase too much of a product you like because you feared it might soon be discontinued? I'm not exactly sure why, but feminine beauty products seem to change all the time. As soon as Shauna finds a shampoo or face cream she likes, it changes or is discontinued altogether. When we do find something she prefers, we buy a lot of it. I don't know what the shelf life of barbecue sauce is, but the last time we were out in Banff for the 12th year in a row in 2005, I bought a few bottles of a barbecue sauce we couldn't find back east to bring home with us. I expected that we would use them within the next year or two, but I just found an unopened bottle hidden in the back of a pantry shelf. I wonder if it's still okay, 15 years later? That bottle made me a little nostalgic, conjuring up happy memories of barbecuing at the Douglas Fir Resort & Chalets up on Tunnel Mountain, sipping a Big Rock Traditional Ale, and gazing at the majestic Rundle Mountain towering in the background.  You know you're in trouble when you start saving food products because they remind you of your past. I'm doing a lot of reminiscing lately.
The other thing I sometimes do, and I suppose this is the result of becoming older and more distracted, is that I leave bottles and jars in the refrigerator long past the "best before" date. The other day, I threw out a jar of marmalade that I suspect had been in the fridge for (perhaps more than 5) years. It did not have a date that I could read, so I just left it there. I don't use marmalade, but it had not yet turned blue and fuzzy, which is my benchmark for no good anymore. It was beginning to get darker, so I finally dumped it. Maybe it is the closet scientist in me; I want to see exactly how long food remains edible. There are likely a few science projects remaining in our refrigerator. One of these days, I will don my hazmat suit and give the fridge a good steam cleaning.  This article should ensure that we never again have guests for dinner, but then again, that ship may have sailed for other reasons. In the back of a closet somewhere is a box of Flutie Flakes we bought when Doug Flutie left the Toronto Argonauts and became a backup quarterback for the Buffalo Bills (late 90s?). Shauna liked him a lot and thought the cereal box might be a collector's item someday. I wonder if the cereal is still edible. Do you think there is some collector out there who specializes in vintage cereal boxes; someone who can tell you if the 1973 version of a Count Chocula box is worth more, because they changed the recipe shortly thereafter? These are the questions that keep me awake at night; these and "will our civilization be around in a few years?"
The other day, I was corresponding with my cousin in Corvallis, Oregon. He and his wife are quite a bit older than I. Early on, when this coronavirus outbreak was first reported, they decided they would be prudent and sequester themselves. Other than infrequent visits to town to shop for essentials (they grow much of their own food and are sheep farmers), they do not go out at all, and keep the gate to their long driveway locked. I was a little surprised to learn that, but I suppose it makes sense for them. While Oregon is not one of the hardest hit states in the union, my cousins are perhaps at higher risk for illness than most, given their ages. The spread of this virus is trending upwards in much of the United States, and some states neighboring Oregon are in the hot zone. I'm going to make a prediction that, when this pandemic is over, and history records how it was handled in America, Donald Trump will be unanimously deemed to be the worst (and decidedly the deadliest to his countrymen) leader in American history.
Once a week for the past several months, I have been performing one of my original songs live on Facebook. This week, my song was "Desertion", based loosely on a Yeats poem. I wrote it about 4 years ago, and it has to do with the existential questions I ask as I grow older. Perhaps I won't have to worry about that much longer, because if COVID-19 doesn't get me, one of my science projects might.
Written by Jamie Oppenheimer ©2020 ALL RIGHTS RESERVED
jamieoppenheimersongwriter@gmail.com