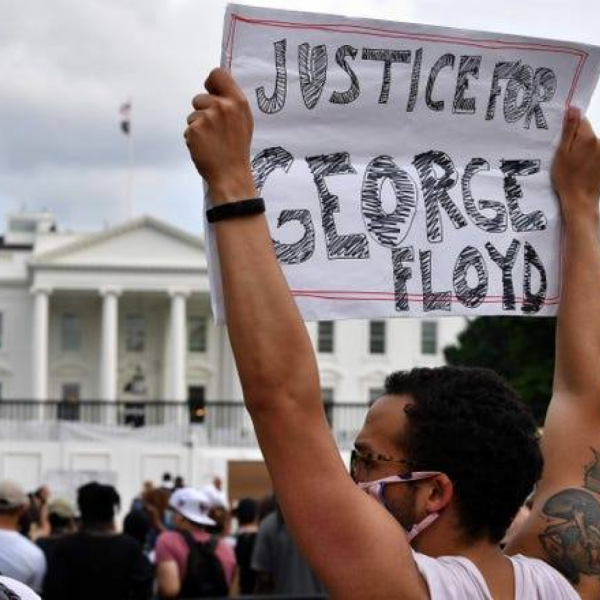 I had it in mind to write a fluff piece about my brown thumb, and about the preponderance of invasive bugs this season up here in the Near North, but I am so disheartened by the events which erupted last week following the murder of George Floyd, in Minneapolis, Mn., that I chose instead to reprise an email message I received today. My heart is hurting, and chipping away at my conscience is the realization that I bear some responsibility for the ills of my society. Maybe I bear 1/3,000,000th of the responsibility, but what have I done to change things?

To follow is the transcript of an email message I received from a newsletter to which I subscribe entitled “Comusings”. Jeff K, the writer (I do not know his last name) fairly well sums up my confusion and anger over the subject of racism. I would be in denial to say that I am completely colourblind; I wonder how many white man are. That said, I don’t think I am capable of the kind of cruelty that police officer inflicted on a handcuffed, unarmed black man, accused of committing a non-violent crime. I don’t think all cops are bad. Just as the violent anarchists who hijacked peaceful protest marches over the weekend undermined the justifiable cause of the majority, so do some bad cops ruin it for all the good cops. Indeed, we are doomed to repeat our mistakes when we do not learn from them. Here is what Jeff K. wrote:

“It’s late Saturday night. There’s a curfew in place here in Los Angeles. Hours ago, police discharged rubber bullets and pepper spray at protesters on Fairfax, less than 2 miles from here. I feel a mix of fury, confusion, guilt, powerlessness and a rare uncertainty about what to do. I sense I am not alone.
In college, I concentrated on race relations. I remember studying Robert F. Kennedy’s extemporaneous eulogy for Martin Luther King Jr. as he consoled a bereaved crowd in Indianapolis on the evening of his assassination. It moved me to tears. He invoked Aeschylus:
“And even in our sleep, pain that cannot forget, falls drop by drop upon the heart, and in our own despair, against our will, comes wisdom, by the awful grace of God.”
Over half a century later, we still await the wisdom that is the promise of this pain. Again, in unbearable heartache, we are left to wonder just how long is the arc of the moral universe.
We have all seen it now. 8 minutes and 46 seconds of knee on neck. Rodney King haunts this moment. The embers from the fires in South Central have smouldered in our country over the past quarter century, fed by the videos that expose the epidemic of police brutality against African Americans.
While deeply re-traumatizing, the widespread sharing of footage on social media has sparked public outrage, launched civic protest, and led to legal action. But it has not increased accountability in most police departments or slowed these savage slayings.
Walter Scott. Eric Harris, Trayvon Martin, Eric Garner. Freddie Gray, Michael Brown. Philando Castile, Breonna Taylor, Ahmaud Arbery, George Floyd and scores more.
As fires burn in Minneapolis, we ask what fire burns in the hearts of men that stokes such anger as to take another’s life? What heavy smoke clouds a man’s moral judgment to deny another’s breath: breath that is our birthright, repeated 23,000 times a day without thought, and taken away, in a brutal moment, without thought?
Man is not born with this rage. It is learned. And the slaughter of innocent African-Americans will not end until we engage in a deep personal and societal moral inventory that isn’t resolved simply by bringing assailants to justice but by addressing the roots of this societal rage. What are the cultural conditions that lead white men to brutalize black men? It may be the most complicated historical question Americans will ever confront.
Swinging between outrage and numbness, we are left wondering what to do.
Words. Do they matter? Of course, they do. King reminds us, “In the end, we will remember not the words of our enemies, but the silence of our friends.”
Speak out, we must. But, before we do, find the silent reflection that Derek Chauvin could not, for that is God’s only voice. Let our words articulate a clarity and moral authority that reflects this quietness, as if our prayer cushion lay across the bare floor of a Birmingham jail.
As a white person, I am seeking to find my appropriate place in this wickedness. If you are white, be humble and listen. But do not be inhibited in your humility lest your silence be complicit in this injustice. For just as a man can transcend self regardless of his religion, so can a man find truth irrespective of his skin colour.

But what to do when words feel so inadequate? When they cannot extinguish the agony and frustration that flares in our hearts.
Take to the street and pray with our feet?
Our social contract demands that we relinquish certain rights such that we receive greater rights and protections. But when society is in breach, when a people are not in receipt of those protections, is not civil disobedience justifiable?
We are left with the same tough questions etched by Langston Hughes in 1951:
What happens to a dream deferred?

Or does it explode?

Right now, it feels explosive. Right now, the Dream feels so far away. The real dream is, of course, that the Dream is no longer a dream.
We must do all we can, every one of us, to instantiate a reality that extends all the protections and opportunities guaranteed in our mutual national contract to everyone. This must start with ourselves, but also extend into every nook of humanity.

What can you do?
Honestly examine your implicit biases and change them. Read and educate yourself (scroll down for a resource list). See your personal wellness as inextricably tied with the well-being of society.
Yes, text Mayor Jacob Frey. Hold your lawmakers accountable. Foster and energize your community. Stand up, march, speak out. Talk to your kids, and your parents, and your neighbors. Listen a lot. Become an activist in the way that is authentic to you – whether that is quiet and empathic or loud and bold.
The world is not something happening to you. You are an active participant in the human condition.
Maya Angelou wrote, “History, despite its wrenching pain cannot be unlived, but if faced with courage, need not be lived again.” May we both pray and work for the dawning of a new morning.
Let’s be here for each other, Jeff."  jeffk@onecommune.com

I think Jeff K's words explain what I feel better than I ever could. I wish you all peace and contentment.