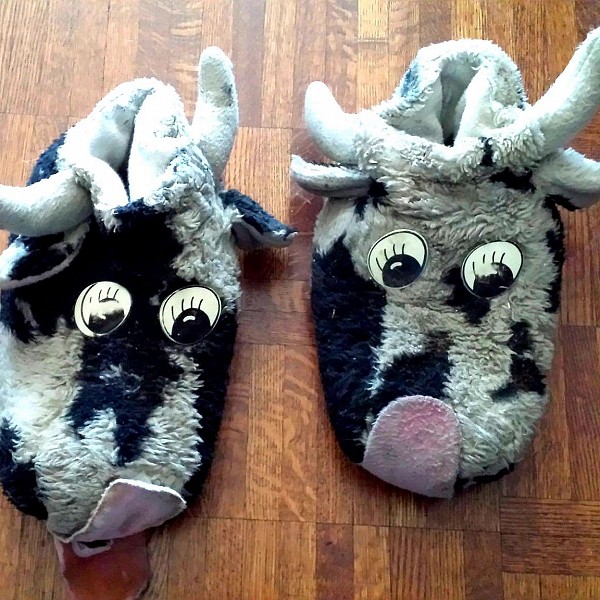 My wife Shauna Leigh loves cows; any cows really, but preferably the black and white Holsteins. It was one of the talking points in our pre-nuptial negotiations. It was agreed that at least one room where we were to live together would be relegated to cow paraphernalia. That room turned out to be the kitchen, which Shauna referred to as the cowchen. When we drove out to Banff, Alberta every spring for 12 years in a row, Shauna was in her glory anytime she spotted cows. One day, somewhere outside Sylvan Lake, Alberta, driving back to Banff from Edmonton, Shauna begged me to pull over so she could commune with some Holsteins. A group of them were far off in a field, and she walked up to the fence to get a closer look. Out of nowhere, she made the strangest noise I’ve ever heard her make (and she is the mistress of strange noises). Lo and behold, all the cows ambled slowly toward her while forming a perfect “V”, and they just stood there staring at us while the leader of the herd licked her hand with its humongous, slimy green, cud-covered tongue. It was bizarre, hilarious, heartwarming, and disgusting, all at once. From that day forward, I dubbed Shauna “The Cow Whisperer”. Perhaps they were paying homage to their queen. Really, anything cow-related has been, for the past 27 years, grounds for a detour. While in Banff, we made regular visits to the COWS ice cream shop for overpriced milkshakes and cow paraphernalia. Cows never floated my boat; I saw plenty of them in my youth. My parents kept and rode their horses on several farms in and around Western New York, so I had my fill of barnyard animals. I always laugh when I hear that song “Cows Around” by Albertan singer/songwriter Corb Lund. I think that song, albeit (green?) tongue-in-cheek, bespeaks the reality of cows. I’ve always been more of a moose person, but moose aren't quite as available as cows.

In fact, I’d never seen a moose in the wild until Shauna and I spent time out west. Early one morning, we were driving down the Icefields Parkway just before dawn, headed back to Banff from Jasper, and there was a big moose cow grazing right beside the highway. Moose virgin that I was, I was gobsmacked. We had just spent a wonderful evening watching our friend Bobby Cameron perform live with his band and hanging out with the guys after the show. As a result, we had stayed awake all night and were already on a natural high driving back to Banff. Then, as if delivered from the good karma universe, that pregnant moose cow appeared. She didn’t seem to mind us being there after Shauna stopped the car diagonally across the oncoming traffic lane, and we both stared at her and took photos for about 20 minutes. There we were, parked on a deserted highway, transfixed by a grazing moose while the rising sun slowly painted the surrounding mountains in golden light. It was transformational. All that was missing was “Thus Spoke Zarathustra” playing in the background. We have both shared so many magical animal encounters while spending time out west.

Along with the love of our spirit animals comes, of course, an obligation to purchase all things involving moose and cows. On one leg of our honeymoon, while in Juneau, Alaska, we bought the best moose hats we've ever seen, and I consider myself to be somewhat of an expert. Regrettably, with over 20+ years of overuse, mine wore out. One antler was permanently drooping, making it even more embarrassing for me to be seen wearing the hat. Some of you might suggest that wearing a hat with antlers is humiliating in and of itself, but likely you also know what it is to feel shame. I do not. As I previously mentioned, Shauna has had her share of cow paraphernalia as well. Along with the previously mentioned cow-decorated kitchen, and the cow tee shirts, cow pens, cow napkin holders, cow cookie jars, cow oven mitts, cow aprons, cow clock, cow message pads, cow sweatshirts, cow pajamas, cow hats, and at least 100 other cow-related items, there were the notorious cow slippers. We can't remember from where they were purchased, but for over 10 years, Shauna lived in those slippers. Eventually, like my moose hat, those slippers deteriorated, and I was constantly being called upon to make repairs. I resoled them twice, one horn had to be re-attached, the eyes fell off, one tongue had to be reglued, and eventually, they simply decomposed.

Just before I threw them out, Shauna insisted that I take a photo of her beloved "cowpanions". Recently, I found that photo and it made us laugh all over again. All the places we’ve travelled together, all of the sights we’ve seen, and all of the wildlife we’ve encountered are conjured up in that photograph of a pair of decomposing cow slippers. It’s been a good life together so far. Do me a favor, dear readers. Help me. Could someone please point me in the direction of a local holstein cow farm so that my wife, the cow whisperer, can get her bovine fix.