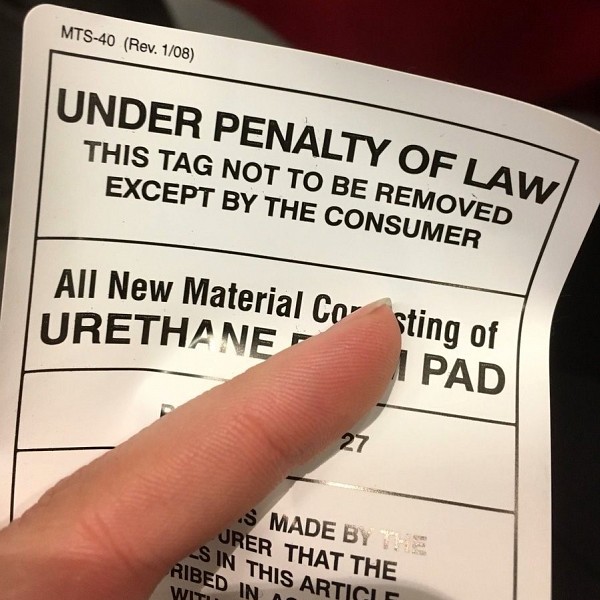 For years, I’ve seen those tags on pillow cushions, mattresses, and the first thing I noticed was that it was illegal to remove them. I never before read the warning carefully, and the other day, I did. The tag actually states "UNDER PENALTY OF LAW, THIS TAG NOT TO BE REMOVED EXCEPT BY THE CONSUMER", but what a strange thing to legislate. I never removed the tag because I thought I’d be breaking the law. I wonder if there are pillow police out there whose job it is to examine cushions in furniture stores to determine if the store has, for obvious aesthetic reasons, torn off the tags and is therefore in non-compliance. There sure are a lot of laws out there that leave me scratching my head.

In a time when some leaders boldly lie with impunity, and it seems like so many of us have slipped a few rungs on the ladder of decency and morality, some of the laws that might have seemed like a good idea once, might not seem so today. In Alaska, it is illegal to be drunk in a bar, and if you enter a bar intoxicated, you can be arrested. Buffalo’s jails would be full of bar patrons. In Arizona, spitting in public is punishable by a fine of up to $2500, or up to 6 months in prison. You might as well outlaw all sports events in that state. In Idaho, non-consensual consumption of another human being is illegal. Is cannibalism a big issue in Idaho? And who would agree to be eaten!?! In Maine, it is illegal to post advertisements on another person’s tombstone. In Maryland, it is illegal to swear or curse while driving on a city street or highway. Two observations: 1. How does one enforce such a law, and 2., I’d be in the slammer in no time. According to Nebraska state law, it is illegal to marry another person who has a venereal disease. In South Carolina, it is currently illegal to dance on Sundays. The fact is, there are a lot of silly, unenforceable laws still on the books, but at some point in time, lawmakers must have felt that the laws created were in the public interest. Now, from the ridiculous to the absurd.

I cannot finish this report without weighing in on the latest ruling by the U.S. Supreme Court, striking down the 50-year precedent of Roe vs. Wade. I am, for the record, “pro-choice” but regardless of where I stand, I don’t think any man should be enacting a law which forces a woman to have a baby. What if the woman is raped, or a victim of incest? What about forcing a woman to carry to term a child that has no chance of survival outside of the womb? What if the woman's life is in jeopardy? People are absolutely entitled to their beliefs, religious or otherwise, but wherein those beliefs negatively impact society overall, they had better be overwhelmingly in the public’s best interest. Recent polls indicate that the majority of Americans are pro-choice. Outlawing abortion, and (probably, eventually) contraception, is a slippery slope. This will quickly burgeon into a massive healthcare crisis. The argument put forward by those biased judges who supported the decision, is that there is nothing in the Constitution about abortions. I feel the same way about the U.S. Constitution as I do about the bible. It requires interpretation. If we follow the word of the Old Testament literally, we’d be stoning to death any woman who was a non-virgin before marriage. In my gut, I knew that this Roe vs Wade ruling was coming as soon as the eminent Justice Ruth Bader Ginsberg passed on, allowing that pustulating cyst on mankind, The Orange Emperor, to appoint his third conservative Justice, Amy Coney Barrett to the Supreme Court. Disregard for a moment that three of Trump’s appointees, Kavanaugh, Gorsuch, and Coney Barrett, openly lied under oath during their respective Senate confirmation hearings about their intentions regarding their stance on abortion; I heard them do it. In fact, the die was cast as soon as Rump was crowned king. This movement has been growing ever since abortion was upheld in ’73. The phenomenon of Trump’s baffling ascent to power stirred up the perfect storm of a country bitterly divided over just about every political issue. It was the evangelical right that has driven the GOP to the outer reaches of the right. My concern, from the very beginning of Rump’s reign, and hence the reason behind my decision to write my song, “New Constitution'' was that he would ignore constitutional laws, and break them whenever he saw fit. For me, that storm flipped open Pandora’s Box, releasing all that was vile and unjust about America. I was under the impression that the U.S. government was intended to separate church and state, but this recent decision puts all doubt to rest. Laws are enacted to protect society. As society evolves, those laws should evolve it. In my opinion, American society is devolving, not evolving. I feel that this latest development in my homeland, is one more nail in the coffin of decency and justice, and the antithesis of democracy.