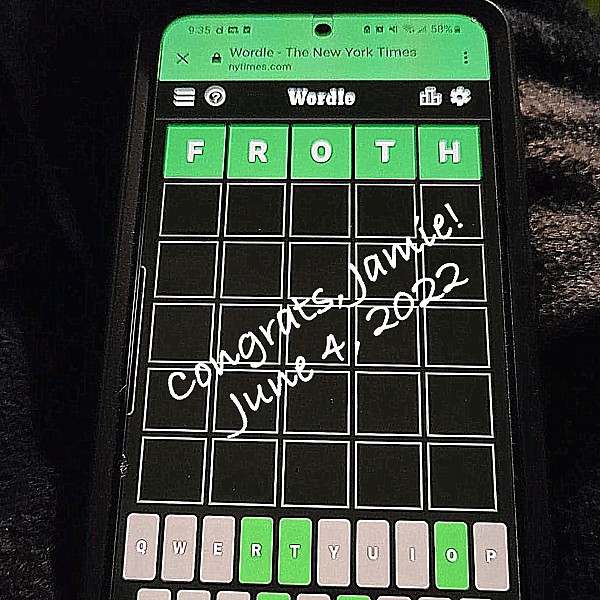 The night before last, I solved my WORDLE puzzle with my first chosen word. I was gobsmacked! For those of you unfamiliar with the popular online puzzle, it was invented by a British software engineer named Josh Wardle, and it has taken off across the globe. The puzzle offers 6 chances to determine the 5-letter word featured for the day. With each attempt, the puzzle solver makes, one is provided with highlighted letters that appear in the featured word. For instance, if a letter in the word you choose is highlighted in yellow, that indicates that the letter IS a part of the featured daily word, but NOT in the right position. If the letter is highlighted in green, the letter IS in the daily word AND in the right position. Sometimes, when I pick a word, none of the letters match, and I am presented with 5 grey boxes. Frustrated, I then know that none of the letters I have picked are in the WORDLE word of the day. That can be a problem when I start to run out of vowels or common consonants. WORDLE drives me crazy sometimes; it is part luck and part skill. Sometimes, it takes me 5 or 6 attempts to get the correct word. Only once have I failed to solve the puzzle. I have solved it in 2 tries several times, but more commonly, it takes me 3, 4, or sometimes 5 attempts. You can download the free WORDLE software and get started on your own daily puzzles here: https://www.nytimes.com/games/wordle/index.html

Not generally a puzzle person, of late I have been doing Sudokus and various word puzzles to jump start my aging brain. I have come to realize that my mind is not as razor-sharp as it used to be. OK, in the interest of full disclosure, my mind was never razor sharp; more like butter knife sharp, but the intention is now to preserve what little grey matter I still retain. Chalk it up to pandemic isolation, or advancing years, or other contributing factors that I don’t even want to contemplate, but whatever the reason, I have noticed an increasing erosion of my short-term memory. I misplace my cell phone at least 4 times per day, I set a coffee cup down and immediately forget where I put it, and I am beginning to have trouble summoning people’s names. Cognitive ability is a complicated subject, and there are so many factors which affect our ability to reason and think. My mom spent the last 5 years of her life in a very troubling state of dementia known as Lewy Body Disease, and I will do whatever I can to stave off that threat. I have had more than a few personal experiences with dementia and, while I understand that the threat is largely out of my control, I am of the school of thought which professes, “use it or lose it.”

While I’ve never been much interested in puzzles, Shauna’s 97 year-old mom “ET” (Ethel Taylor) got me interested in them. She’s been doing crossword puzzles, Sudoku puzzles, and other word games ever since I met her in 1992. She has always maintained that one of her biggest fears about aging is that she will lose her ability to think clearly and reason. She still amazes Shauna and me with her mental acuity. My dad was like that as well. His wit was legendary, right to the end. Shortly before he passed on at 98, when my sister was visiting him from out of town, she went into his bedroom to say, “goodnight, I love you”. His response was: “I love you too ... 80% of the time.” Another geriatric role model is HM Queen Elizabeth II, who last week celebrated 70 years on the throne. I admire the Queen for her longevity, but also for the grace and dignity with which she has conducted herself throughout these many years. Did you see her having tea with Paddington the bear? Priceless.

I know that my one-try WORDLE accomplishment was a fluke, and I will likely never repeat it. That said, I will always remember my surprise and elation when I picked that word. It was just a lucky guess, but it felt like winning the lottery. I may not be the sharpest knife in the drawer, but I am fiercely determined to preserve what I have left of my active brain cells. I am now closer to 70 than 60 years of age. I am cognizant of the fact that one’s health IS indeed one’s wealth.