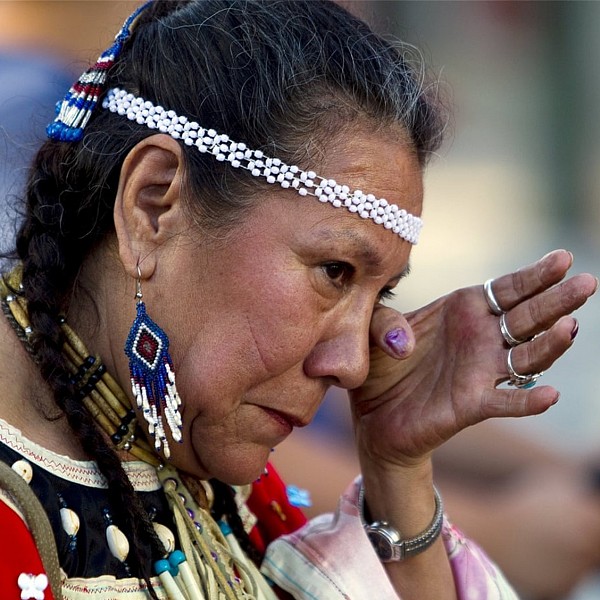 Back in 1970, I saw the movie "Little Big Man" and it was shocking to me. Based on the 1964 novel by Thomas Berger, that was the first movie I'd ever seen that depicted Native Americans in a sympathetic way. Albeit modified for Hollywood, the story was a real eye-opener for me. Up until then, I was raised on the myth of the American Western, namely that the cowboys were the good guys and "the natives" were the bad guys. When I was a young boy, we played "Cowboys and Indians" in the school playground. By the time I was a teenager, of course I knew that Roy Rogers was no more real than the Tooth Fairy, but I never understood how corrosive the white colonization of the West had been, and how destructive to Indigenous people that narrative had been. Since my youth, I've read and seen enough about the white man's treatment of Indigenous peoples to know that grave injustices have occurred, and are still occurring.

Last week, Jeff Carter, Managing Director of Hunters Bay Radio, re-posted something written by an older Indigenous woman, wherein she described what she witnessed years ago: an atrocity committed at one of the notoriously brutal residential schools in Canada. The act of cruelty she described was unbelievably violent and horrible, and like so many of the interviews I have watched or read by Indigenous victims, what was most palpable was their indignation. It is easier to turn a blind eye to these stains on our history than admit our wrongdoing. Thousands upon thousands of Indigenous victims have recounted the same stories, verifying that the horribly inhumane acts occurred. For decades, they have been stonewalled and doubted. Worse yet, they were unfairly discredited or simply not believed at all. That is still happening, but the truth is becoming impossible to deny.

Now, with the exposure of the 215 child corpses on the grounds of a residential school in Kamloops, B.C., we have undeniable proof that crimes were committed, and if you ask some of the survivors of the ill-fated residential school system, what happened there is only the tip of the iceberg. There goes the myth that Canada is impervious to the racism prevalent in the rest of the world. The sad reality is that evil resides everywhere. As the old saying goes, the road to hell is paved with good intentions.

I've lived in Canada since 1994, and I was always under the impression that this country was morally superior to my American homeland. The fact is, Canada is no exception. In the case of The Indian Act of 1876, bad government policy, administered by the Catholic Church, caused irreparable damage to our Indigenous citizens. I don't know if the Indigenous survivors and their families will ever forgive us, but certainly they cannot and will not if we don't acknowledge the crimes committed against them.

A few months ago, I was personally attacked, because I wrote a report concerning the systemic abuse of women in our society. I was, according to my accuser, a clueless "old white dude" spewing platitudes and throwing my arms up in the air. This person wrote that I could not possibly fathom or empathize with the plight of abused women. I am far from perfect, and sometimes I'm self-righteous. Certainly, I am under-informed about some of these complex and sensitive issues that plague our society. I am also a sentient human being. Before you judge ANYONE, you should strive to understand their history. I think one of the fundamental problems of our species is that some people don't make the effort to learn about other people's cultures, religions, and histories, etc. Start a dialogue, don't assault or attack someone for not thinking, acting, or looking the way you do. Last week, the bodies of 215 Indigenous children were discovered in an unmarked grave on the grounds of a residential school in Kamloops, B.C.. It was evidence of an unnatural, evil, and misguided policy of cultural extermination. By any measure, it was an unspeakable injustice. If you want to know how that could happen in a "civilized" society, perhaps take a moment to see your world through another's eyes. Read more about the history of your own country and that of others, and remember that it repeats itself, over and over. We make the same mistakes, over and over again. What if the next victim of such an injustice is you? As the late Reverend Martin Luther King Jr. said: "Injustice anywhere is a threat to justice everywhere".