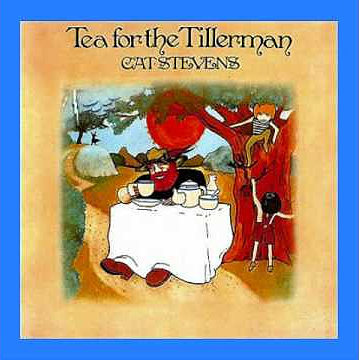 Today, on Hunters Bay Radio, during Grant Nickalls’ morning show with Jeff Carter, Grant played an old Cat Stevens song, “Miles From Nowhere”, and it brought back a flood of memories. I was instantly transported back to a summer night in 1971, when I was about 16 years old, and that now legendary “Tea For The Tillerman” album was then less than 1 year old. That was a bygone era, when people actually sat down and listened to an entire album from start to finish. A friend, his sister, and I sat enjoying the album out on the screened in porch of their rental cottage on Windmill Point in Ft. Erie. The night was hot and humid, warm candle light flickered on the wall and ceiling, and amidst the sound of cicadas, and Lake Erie waves lapping upon the sandy beach, the music from that album drifted through the summer peace and became permanently imprinted in my memories. The moment is palpable, and I can summon it clearly every time I hear one of the songs from that album.

In 2014, Shauna and I attended the Yusef Islam a.k.a. Cat Stevens concert at Massey Hall in Toronto. To see him perform in person was on my bucket list. To prevent scalping, we had to undergo a tedious verification process at the door, which meant there was a lineup around the block to get into the hall. Before we were admitted for the concert, everyone had to show evidence that we were in fact the ones who had purchased the tickets they presented. This was the first time Cat Stevens had performed in a long time, much less in a small venue, and I’m sure that some people would have paid a king’s ransom to buy those tickets. We were not disappointed; I was able to hear one of my songwriting idols in the flesh, performing some of my favourite songs. I will admit that it was a little sobering to think that the artist was then 44 years older than the man who produced "Tea For The Tillerman". Almost everyone in the audience looked older than we were, but I know I was in denial, about us, and about Cat.

Last week, I used my new LP converter to digitize one of my old Cat Stevens albums, “Catch Bull At Four” and played a song called “Ruins” from that album on my LYRICAL WORKERS radio show. I have not listened to that song in over 30 years. It was a mnemonic trigger, and had a similar effect on me to hearing “Miles From Nowhere”. I will wager that the overwhelming majority of listeners remember Cat Stevens for that “Tea For The Tillerman” album, but all told in his career thus far, he has produced about 16 albums of music. The guy I watched up on the stage at Massey Hall in 2014 was not the same man who wrote “Father And Son”. He was an old man, wizened by superstardom, scandal, and hundreds of other life experiences that change any person over 40 or more years.

I have grown older and less patient than the 16 year-old on that front porch, and I find it difficult to sit and really listen to an album from start to finish. My attention span has atrophied to the point where I can’t go 10 minutes without consulting my smartphone. I suppose that is the unconscious transformation I have made, influenced by the fast-paced world that surrounds me. Still, every so often, a song will come on the radio to remind me of a time in my life when things seemed to go slower, and when I didn’t feel like I was racing against the clock. It’s always been my hope that some song I have written will have meaning to someone long after I am gone. “Miles From Nowhere” played today, and suddenly, I was in a different world; a world where the stillness of a summer night and a timeless piece of music gave me peace.