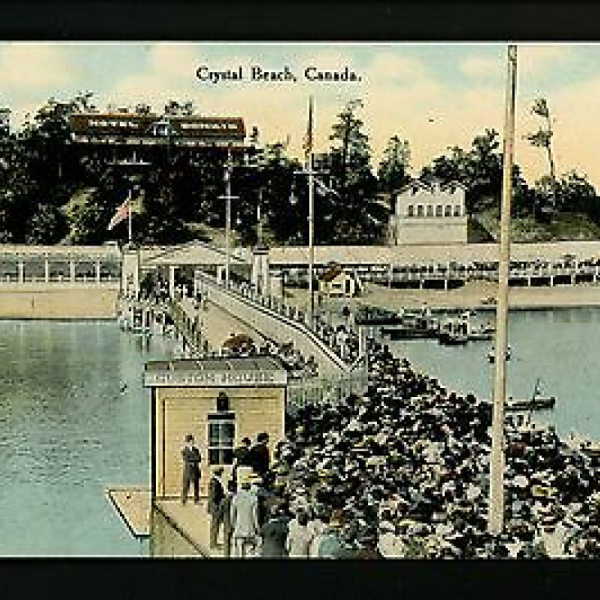 What a difference a few weeks makes! One day, I’m wondering how early we’ll need to leave home in order to get to the Matt Andersen concert on time, and the next, I’m disinfecting counter surfaces and trying to figure out how to keep my immune-compromised wife and her 95 year-old mom from catching COVID-19 during our self-isolation. These days, I’m trying to ignore all the misinformation and spin, and have mostly been watching the 11 o’clock news for the broad strokes. The one good thing that has come from this pandemic is that it has prompted me to re-establish contact with some old friends.

The other day, I emailed my friend Scott, who now lives alone in Los Angeles. California is one of the states that has been hit hard by the virus outbreak, and I wanted to find out how he was doing. Scott, my old friend Bob, and I spent a lot of time in each other’s company during the summers of our reckless youth. One of our haunts was the Ontario Hotel in Crystal Beach, where as under-aged kids, we could buy a beer with a ridiculously unconvincing fake I.D. The live entertainment, the big draw at that hotel, was two musicians billed as “Rod & Roger”. One guy played the organ and the other played the accordion, and they were abysmal. The funniest part about Rod & Roger was that, in front of the organ, there was a sign listing over 50 popular songs that they could play by request. Those included songs by the Rolling Stones and Led Zeppelin. You haven’t lived until you’ve heard “Whole Lotta Love” played on the accordion. It felt good to re-connect with an old friend who knew me in my ill-spent youth.

Another guy I called last week is Edmond Simmons, a client to whom I used to deliver meals when I volunteered for Meals On Wheels in Buffalo, NY. He and I became unlikely friends over the many years I delivered meals to him. I suppose it was his indomitable spirit that drew me to him. I don’t ever remember Edmond complaining about anything, and his life was far from perfect. He used to have a good job as an engineer, working at the Buffalo Zoo, but he was fired when his employers suspected he was drinking on the job. In fact, Edmond was experiencing the undiagnosed beginning stages of Multiple Sclerosis, and his lack of coordination was due to neurological attacks, not inebriation. By the time he was diagnosed, he was confined to a wheelchair and struggling to keep his head above water. We had a strange and dysfunctional relationship. While we were only in each other’s company for about ten minutes, once per week, we would spend most of that time light-heartedly insulting each other. I suppose anyone within earshot, would have presumed we didn’t get along. Quite to the contrary, we had a healthy respect for each other. Edmond has an unquenchable thirst for knowledge and he is an interesting character who is a hero to me for his strength and positive attitude. I’ve only kept in touch with him sporadically since I moved to Canada in ’94. When I spoke to him last Friday, his condition had worsened to the point where he could hardly talk. I was concerned that the virus might take him out, but in fact, I think it will probably be the MS.

Regardless of the bad news about this seemingly out of control pandemic, none of us has a crystal ball to predict our fate. I for one have been oblivious to my mortality for most of my life. It may be time to reset, regroup, and reconsider my priorities. I’ve certainly been doing a lot of soul searching in the past few weeks. I ponder my mortality far more now than I did when I was rocking out to “Jumpin’ Jack Flash” performed by an accordion player with a mullet in a Crystal Beach dive bar. Back then, I was invincible. I was, I thought, immortal.

So that we could take care of her and be together as a family, last week, I drove Shauna’s 95 year-old mom “ET” up from Toronto to stay with us until the pandemic settles down. The other night, I had an anxiety attack, overwhelmed by my concern about how to keep my family safe. A million apprehensions flooded my mind, and the anxiety from which I sometimes suffer, went into overdrive. As I do when that happens, I did some deep breathing exercises and remembered all the good things in my life. I thought about Shauna, Edmond, Bob, Scott, and all the other old friends and loved ones who have touched my life. I am going to re-connect with more of them over the next few weeks.

Finally, I end this report with the acknowledgement that I am thankful for this community, for all the music lovers who live in it, and for dozens of other things as well. Maybe I just didn’t go through the process of verbalising it before. I think it is appropriate that, playing on Hunters Bay Radio at this very moment, is Cake’s cover of “I Will Survive”. Indeed, I’m going to do my best, and so should you all. Follow the directives outlined by health experts, and remember to show your love to your family, your friends, and your neighbours. When you post on social media platforms, be mindful of the messages you send. If ever there was a time to be the best you can be, it’s right now. Fear and ignorance are your enemies.

We’re all on the same train. I’m going to try my best to enjoy the scenery as we barrel down the tracks.