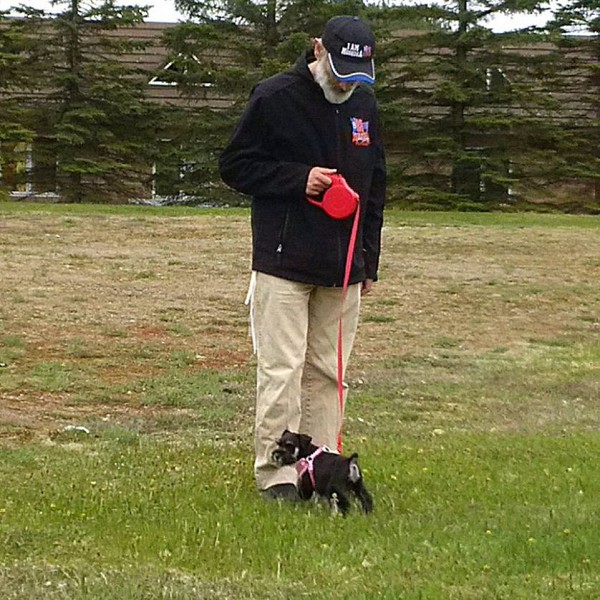 As I begin writing this report, Sydney, our 9 week-old Miniature Schnauzer is currently out cold on her Granny Ethel “ET” Taylor’s chest. She is named in honour of Shauna’s late dad and ET’s husband, Dr. Sydney Taylor, and her official name is Dogtor Sydney Taylor. Her namesake loved the breed and took wonderful care of his dogs. After a two month stay with us, today Shauna’s mom “ET” is returning to her home in Toronto to resume whatever sense of normalcy one can imagine in this much-changed world. While she does have a wonderful caregiver, she has remained, much to the consternation of her over-protective children, remarkably independent.

The journey to our new pup Sydney has been a long and crooked one. We lost Jasper a little over a year ago. For all of us to whom pets are family, you know the grief that is involved. I’ve spoken with so many people in the last year who have lost pets, and their common advice was always “Oh, you’ve GOT to get another dog, and do it soon.” When a little time had passed, we contacted Jasper’s breeder, who is one of the best in North America. We wanted the best chance to acquire and raise another healthy dog. The Taylor family had once had a horrible experience with a pup from an irresponsible breeder, and that dog had a constellation of health problems. Jasper was a healthy dog and lived a good, long life, and we wanted another Schnauzer as healthy as she was. By the way, we went through a comprehensive interview with Jasper’s breeder before she would accept US.

Regrettably, we were not able to acquire another pup from the same breeder, after a year of hoping we would. First, we had to wait for one of her bitches to go into heat. Then, when that happened and she was inseminated, the pregnancy did not take. The next possible window of opportunity was months later, and when the insemination was to take place, there was a terrible snowstorm which prevented the two parties from getting together. Our final hope was for a pairing with one of her males and a champion bitch, but when that mating was to occur, there was another complication.

Shortly before we got the news about the last failed pairing, a strange thing happened. A Canada goose landed on Jasper’s grave, which is overlooking the lake in front of our log home. It stood there for the longest time without moving, then flew away. Shauna took it as a sign, and called the breeder, hoping for good news. When it became apparent that another pup was not in the cards, and that we had now waited hopefully for just over a year, the breeder took pity on us and put us in touch with one of her respected colleagues, a woman in Ontario whom she trusted to be a responsible breeder. In a serendipitous turn of events, we were just in time to acquire one of the three pups from her latest litter. The pup had been spoken for, but the buyer turned out to be unacceptable, and the breeder had just  returned the deposit. Had we not called when we did, that pup would have been sold to another lucky owner within an hour.

5/19/20 – Last night, we posted a short video of Sydney on Facebook and I think it made a lot of people smile. We could all use a little good news right now. I don’t usually believe in signs, but perhaps that Canada goose knew something we didn’t know.