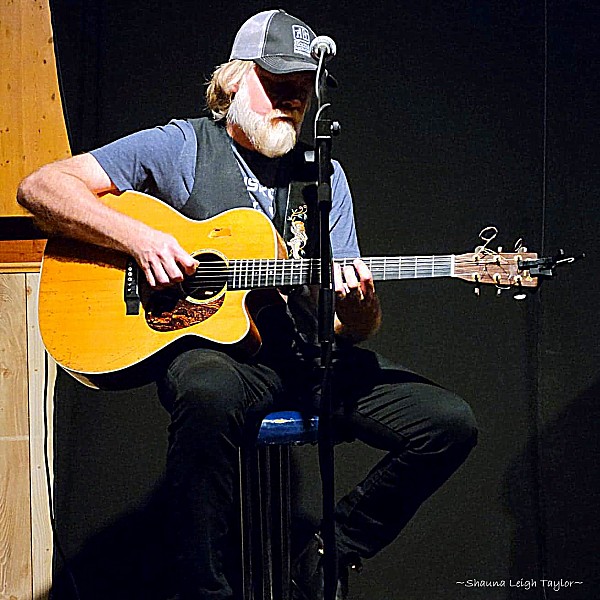 Happy "May 2-4" long weekend, or as we purists call it, Victoria Day. The former Queen would have turned 203 years-old. Thankfully, there were few fireworks along our lakeshore this weekend. I enjoy fireworks, but our dog Sydney does not. I suspect fireworks bother a lot of canines and other animals as well. My mom and dad used to have a dog that was so terrified of fireworks that she hid, trembling under the couch on the 4th of July, and would not come out until the next day. Sydney just barks a lot.

Last Friday night, we held our first 3rd Friday Coffee House in over 2 years at the Burk’s Falls Royal Canadian Legion. Our friend Bob Gray, a co-founder of that monthly musical event, ran it successfully for close to a decade, but regrettably, ill health has sidetracked him. He asked if I would carry the torch and, with the help of Sean Cotton, and Bill Stewart, we hosted our first show. It was a perfect recipe: a local audience eager for this event to resume, Bill providing excellent sound, Sean’s musical contributions for several acts, and the local musicians we chose to play who brought their “A game”. We had a tremendous turnout, the legion actually sold out of their weekly fish fry, and the positive energy was off the charts.

There is something special about LIVE, local shows and the positive energy they generate for both the musicians and the audience. I’ve said this many times before, and I will say it again: in general, the music business stinks and from what I’ve seen, read, and heard from many musicians, it always has. These days, one’s chances of striking it rich as a musician are slim to none. Not obligated to fill seats or cover a hefty overhead, sometimes, these local acts really shine. I knew as soon as we advertised the coffee house, it was going to be a popular event.

A week ago last Sunday, Shauna and I watched the Juno Awards on television. I am gobsmacked by what passes for pop music these days. Perhaps it has always been the same, and while I assume that I am out of the loop, I do know a little about the craft of songwriting. I question whether any of today’s popular songs will have the staying power of a song such as Gershwin’s “Summertime”. So many of the Juno performances lacked the intangible soul and honesty that I look for in the music I like, no matter the genre. Like so many other forms of entertainment to which I am exposed of late, it fell short of the mark.

Good music will always be made and appreciated by music lovers everywhere, be it Rap, Country, Blues, Broadway, HipHop, Alternative, Rock, Bluegrass, or Classical. Sadly, it does not always receive the recognition I think it deserves. That said, as long as there are human beings, music will live in the clubs, house concerts, kitchen parties, local legions, parks, festivals, churches, and community centers around the world. Music is the one thing most of us still have in common, or at least understand that we do. A hearty thanks to all the participants in last week’s Burk’s Falls 3rd Friday Coffee House. The audience and the players made it special. Last Friday night reminded me what music is really all about .... bringing people together.