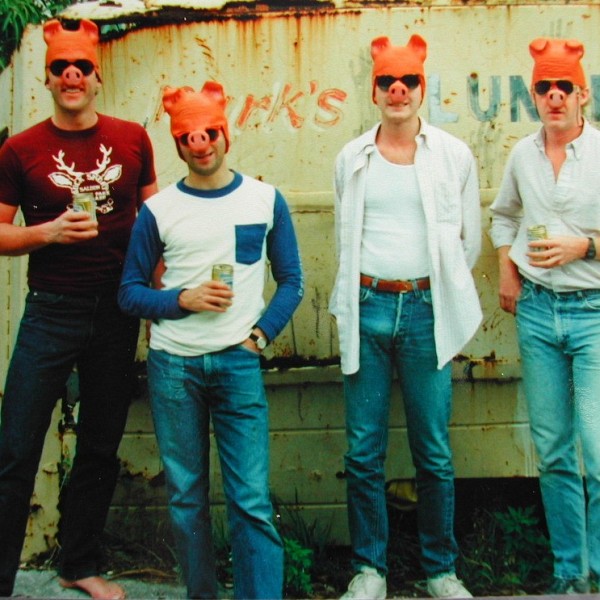 It’s time for another fuzzy memory. I told this story many years ago in another report, but it bears repeating. A few weeks ago, I posted a photograph of a group of my friends, riding in my old Chris Craft Sea Skiff, and one was wearing an orange, half-face, latex pig mask. At one point, I and some of my friends each had our own latex pig mask. Those were our official party masks. Because they only covered the top half of the face, they did not interfere with one’s ability to drink beer, and that was of the utmost importance. Those masks unleashed our partying superpowers, and perhaps they even transformed our personalities. Anyone who has ever worn a Halloween costume knows the power of a mask.
Among the many mask stories, one vacation stands out for sheer debauchery and untoward behavior. Back in the 1980s a group of us rented a large, rooftop condominium on Grand Bahama Island for a week’s vacation of non-stop partying. The 8 or 9 of us in that group frequently celebrated together in Buffalo, so moving the party to the Bahamas was a slam dunk. On our first day, we rented a dilapidated, 1970s mint green Cadillac the size of Nebraska, with bad suspension, balding tires, and a shredded, peeling dark green vinyl top. We drove that beast all over the island, wearing our pig masks and stirring up mayhem and chaos. There was gambling, drinking, and of course, there was an abundance of pig mask behavior. That Caddy was on its last legs when we rented it, and we were decidedly the nail in the coffin. After our first night on the town, we somehow lost what was left of its decaying exhaust system. There is nothing like the sound of an unmuffled, big block V8 engine to wake the dead. Everybody knew when the pig people from Buffalo were coming, that’s for sure.
One day, 6 or 7 of us took our loud, smoking, lime green chariot on a road trip to the other side of the island. We’d heard about the fancy Jack Tarr Village resort, far removed from the froth and fray of our side of the island (read: scofflaws like us). We wanted to see for ourselves how the other half lived, and we had every intention of behaving ourselves. We planned to have one overpriced drinks, maybe to hang out on the beach for an hour or so, and then to head home. The day did not turn out as planned.
We got off to a bad start, because our Caddy had a pre-ignition problem. When we arrived at that fancy resort, parked and shut off the car, it shuddered for a good 5 seconds, after which it let out an ear-splitting bang which in turn emitted a huge cloud of blue smoke into the pristine air. That was a sign of things to come. Unfamiliar with the all-inclusive resort experience, we discovered that Jack Tarr Villagers prided themselves on their privacy and exclusivity. If you were not an official Jack-Tarr-Village-card-carrying guest, you were persona non grata. I can’t imagine why a quiet, exclusive, family-friendly resort would not welcome a group of loud, young adults, 4 who were wearing pig masks, parading about their property, but that was what happened. We were summarily rejected. Some of us, not our designated driver, were a little intoxicated at the time, so rejection by those pseudo-exclusive resort imposters, was not well received. Indignant, we then “pigged” the pool area, then moved on to the bar and lobby. With each subsequent reprimand, we became more obnoxious, until we spent the remainder of our ill-fated visit eluding security guards and photo bombing befuddled residents as they stood for carefully posed family photos. Somewhere, I have a picture of my friend Michael popping out of the bushes wearing his pig mask just as a carefully posed family portrait was being snapped. What did Groucho Marx say about country clubs? I felt like he must have been talking about us. Anyhow, we then not only had security guards chasing us, but also angry hotel guests. We beat a hasty retreat to our rusty land yacht, a gathering crowd of disgruntled people chased us. After what seemed to be an eternity, our driver managed to get the engine to turn over, and we took off with tires squealing. In our wake, shrouded in a thick cloud of blue smoke, we could see the angry residents and security guards waving their arms and shaking their fists. They reminded me of the angry villagers coming to lynch Frankenstein’s monster. I do believe that was my last visit to a Jack Tarr Village resort, but as we sped off, I could not help feeling a hint of sinister satisfaction.
As I said, those pig masks were to blame, I would never have behaved that way had I not been wearing the mask. As a final note, as instructed, when the vacation was over, we left the very tired Caddy in the airport parking lot. That very well might have been its last rental. By now, on top of the myriad of other mechanical failures, its rear differential was bone dry, and it was then smoking from the friction of the unlubricated rear axle. As we took off in our puddle jumper to Florida, we could see our legendary beast, our weary dragon in combat, possibly about to catch fire in the airport parking lot, shrouded in a gathering plume of smoke. Those old Caddys take a lickin' and keep on tickin'.
Written by Jamie Oppenheimer ©2020 ALL RIGHTS RESERVED
jamieoppenheimersongwriter@gmail.com