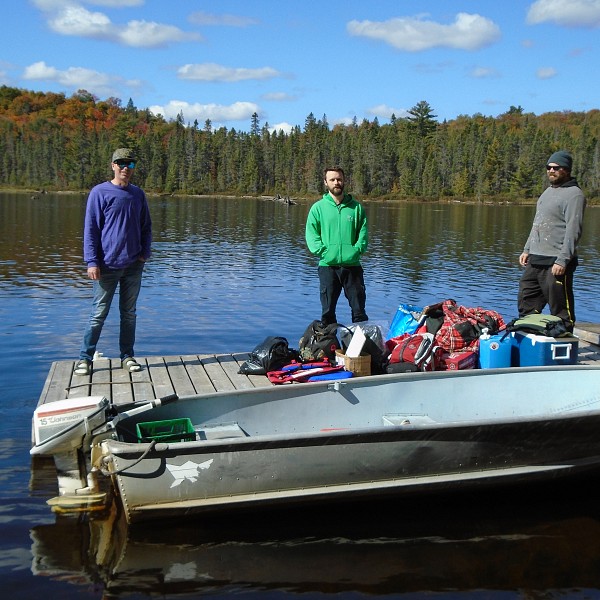 Inspiring each other in a picturesque environment; that was the theme of the weekend when three local artists ventured to an island on Canoe Lake in Algonquin Park.

Brent Statten, James Leonard and JF Kuehnen made sure they had all the necessary supplies, specifically paint and canvas.

The three artists are part of the Muskoka Unlimited art collective and had discussed their common interests in paint, abstract beauty and nature prior to spending a weekend together at a cabin in Algonquin.

As one of Tom Thomson's favourite haunts, Canoe Lake is a distinctive place of artistic inspiration; which led the three artists to paddle out in search of a creative spark to boost their imaginations.

As legend has it, the cabin where The Island Three stayed is near the area where Thomson allegedly drowned.

Arriving at the cabin on Friday evening, the trio prepared for the next day and discussed their creative plans for the weekend. They headed down to the dock to adsorb the sunset and its colours bouncing off of the bright shades of orange, red and yellow as the Algonquin peaked in its autumn colours.

“Sort of funny, staring at the adjacent shore is what I consider home ... over there," said Statten, remarked as the sun slowly fell from the sky. "Great to share it with others that see something in it.”

The next morning after coffee and breakfast, the artists separated, and each sought out their own piece of the island to set up their respective canvases and paint. An illustrative photographer as well, Leonard found inspiration for his brush and lens.

“After an off-kilter summer,” said Leonard. “The island turned out to be a great spot to slow down, recharge and reset.”

During their trip, the three commenced a combined eight paintings. Leonard completed one and had another one well on its way, while Statten was close to completion on one piece, and Kuehnen produced five canvases at various stages. The three of them later completed their pieces back in their home studios.

“We had been talking about the park for a while,” explains Kuehnen. "We finally made a plan to go. It is an amazing place for colours and absorbing the serenity nature provides ... it was the first time any of us went on an artist retreat, and it felt right. I hope we can turn this into an annual thing and invite more members of the Muskoka Unlimited collective to join.”

All eight original pieces inspired by this artist retreat are available for purchase exclusively at www.MuskokaUnlimited.com