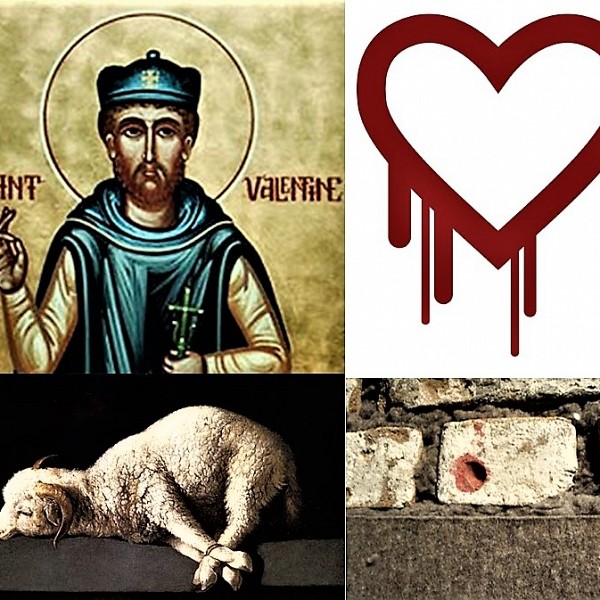 Valentine’s Day will soon be here and it’s certainly going to be a lonely one for many single people throughout the land.

The funny thing is that the majority of these “horrible Valentine’s” for most people aren’t really that bad compared to the bloody history of Valentine’s Day and in general the date of February 14, which includes beheadings, sacrificial rituals, organized crime mass slayings, assassinations and much more.

So, while some of the people in this world lament their misfortune in love, let us take a brief look at the legends which make up the history of this most ridiculous annual event.

However, one of the Valentines is said to have defied a Roman Emperor’s decree that outlawed marriage for young men who were primed to be soldiers in the legions. Apparently, this Valentine performed secret marriages for young people in love. He was put to death for his troubles.

Then there is the case of Saint Valentine of Terni, a bishop who was beheaded for deeds against the Roman Empire. The stories don’t end there, with some believing Valentine was killed for helping Christian people escape Roman incarceration.

These feats of selflessness that ended in loss of life are what some people point to as the reason for Valentine’s Day – to honour the man, or men, on the day of their death.

Another story involves the pagan ritual of Lupercalia, where the sacrifice of both a goat and a dog to pay homage to Faunus, the god of agriculture, and the Goddess Lupa, who as legend has it was the she-wolf who cared for Rome’s founders Romulus and Remus when they were abandoned as infants.

Eventually the English picked up on some form of the Valentine holiday and, as is their custom, they began the changes which would lead to the nonsensical traditions many celebrate today: poetry, cards … etcetera.

But, for a day known by many to celebrate love, there were still many instances of cruelty and hate which took place throughout the years on February 14.

Here are but a few significant instances where cupid, chocolate hearts, and greeting cards were far from everyone’s minds.

In 1349, 900 Jewish people were burned alive in Strasbourg and almost the same amount were banned from the city as an ignorant population blamed them for spreading the Black Death.

In 1919, February 14 marks the beginning of the Polish-Soviet War.

In 1929, the infamous St. Valentine’s Day Massacre takes place where Chicago mob boss Al Capone ordered the killing of seven rival gangsters … allegedly (the order, not the killings; those happened).

In 1945, during World War II, the second day of the bombing of Germany’s Dresden by Allied air forces takes place … and on the same day, Prague is accidentally bombed as pilots who were supposed to be hitting Dresden get confused – or something like that.

In 1979, In Kabul, Muslims kidnap Adolph Dubs, who at the time was the American ambassador to Afghanistan. Dubs is killed later during a gunfight between the kidnappers and police.

In 1989, Ayatollah Khomeini, the Supreme Leader of Iran, issues a fatwa calling for the death of Salman Rushdie (who also had a bounty put on his head) and his publishers because of his novel, Satanic Verses.

In 2005, Rafik Hariri, Lebanon's former Prime Minister, is assassinated and chaos sweeps the nation … as well, seven people are killed and 151 wounded in a series of terrorist bombings in the Philippines.

In 2008, a shooting at Northern Illinois University takes the life of six people with another 18 being injured.

These are only a select few of the events which are in full contradiction of what many celebrate as a day of love.

So, if you’re along this Valentine’s Day and lamenting not having a person to share it with, remember it could be a lot worse: unlike the day’s namesake, at least you still have your head.

If you have a story idea or tip for news, lifestyle, sports or entertainment, send an email to hbr@muskokaradio.com or chris@muskokaunlimited.com