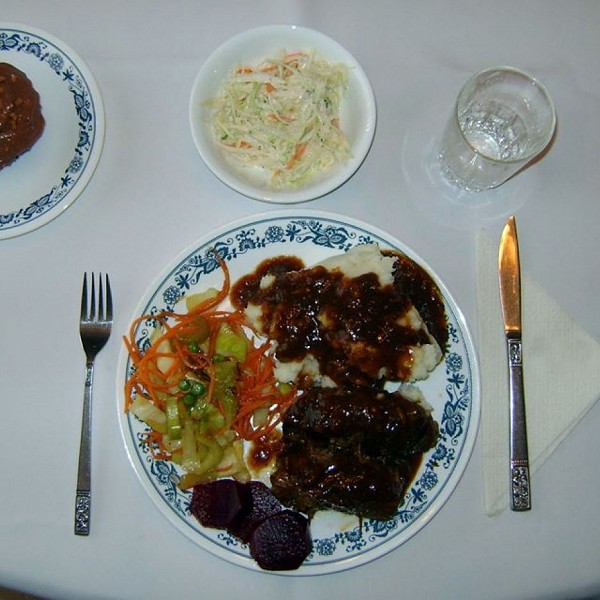 Eating Out In Muskoka - The Chalet Country Kitchen

I treated myself to dinner from The Chalet Country Kitchen recently, and what a treat it was! Two slow-cooked beef rouladen with gravy, garlic mashed potatoes, veggies, coleslaw, pickled beets, and for dessert, a huge chocolate cupcake sprinkled with Skor chips.  Everything was cooked from scratch, and such large portions!  I plated it all for the photo, but then put half into the fridge for tomorrow's dinner.

My Mom makes the best beef rouladen, and I have never been able to duplicate them, but The Chalet Country Kitchen has. These were every bit as good as my Mom's. Fork-tender and delicious with a hearty gravy, and enough gravy for the garlic mashed potatoes as well.  All this food and that delectable cupcake for dessert, all for only $16.00.  A wonderful, home-cooked meal for an amazingly low price.

The Chalet Country Kitchen is a home-based scratch kitchen catering business that just started up in November, but the owners have food handler's certification and over 45 years of experience in the food industry.  You may recognize Angela and Jon from the sushi bar in Bullock's Independent Grocer, which Angela and her partner Steve own and operate.

Angela's parents had a German Canadian Restaurant called The Chalet Country Kitchen from 1974 to 1980, and they taught her all their recipes.  Angela and Jon are now reviving the legacy they left her.  Her parents put a lot of love into their food, Angela says, and she tries to give hers the same care.  Angela and Jon test marketed on a group of about ten people to come up with their menu, and now they've taken the next step in bringing it to social media.

The Chalet Country Kitchen's regular menu includes four frozen pies, seven frozen entrees, seven hot soups and a daily hot meal which is posted every morning.  These meals include barbecued back ribs, Chinese food, rouladen, Weiner schnitzel and five others, and they can also make vegetarian meals.  The Chalet Country Kitchen uses only fresh produce, butter, olive or grapeseed oil and Himilayan salt, and cuts sugar and fats by using half of what most recipes call for.

The Chalet Country Kitchen is open every other Sunday, and every Monday, Tuesday, Thursday and Friday.  Orders should be in by noon at the very latest so that Angela and Jon can shop and prepare, and can be picked up between 6 and 6:15 pm.  Large orders of four or more dinners require 24 hours' notice, and The Chalet Country Kitchen can cater up to 75 people.  Delivery is available in the Huntsville area only.

If you're looking for real home cooking from scratch, generous portions and great value (meals range in price from $10 to $16), call The Chalet Country Kitchen at 705-783-1283. You won't be disappointed.

The Town of Gravenhurst has confirmed that a staff member has tested positi...

The Protect Muskoka’s petition to preserve 443 acres of Bracebridge wetla...

Bike Route From Gravenhurst To Bala Inches Closer To Reality

A bike path from Bala to Gravenhurst could be a reality in the future after...