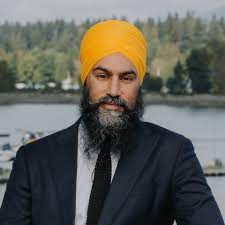 The following opinion represents the views of the author and not necessarily that of Hunters Bay Radio Inc.

The NDP are attempting to reach a broader audience by using social media and shifting to a softer political message. This is exactly what Canada needs.

Jagmeet Singh, leader of the NDP, is the face of the party’s newest social media campaigns through Instagram, TikTok and even the new Clubhouse app.

It’s refreshing that a man of colour who is proud of his ethnicity is chosen to be the face of a big political campaign. It brings me a sense of appreciation for diversity as well as a sense of hope that people of colour can rise to prominent positions without abandoning their cultural background.

Most recently, Singh joined Canadian blogger Sarah Nicole Landry for an Instagram Live on March 23. Landry is not in the political sphere but has 1.9 million followers on Instagram where she shares messages of self-acceptance, overcoming body shame and motherhood. This is not your typical political collaboration.

Canadian party leaders rarely engage in these types of unscripted conversations. Although it’s unclear how Singh and his team came about choosing Landry to connect with, I think it was a great choice. Landry talks about topics that are uncomfortable. She posts images of her body after giving birth and forces people to acknowledge that women’s bodies aren’t typically the same after bearing a child. How many people do you think this message impacts? How many mothers are out there that can relate?

This is a big part of why I think Singh and his team made a great choice in connecting with Landry.

During the Instagram Live, Singh let us into his home and showed us who he is. He shared his caring, empathetic and charismatic side.

Political leaders often feel elusive in that they’re hidden, always very well prepared with speeches and are normally heavily coached on what to say and what not to say. They’re taught how to answer questions and dodge others. They feel unreachable. But who are they really?

When it comes to running a country, being known and seen by the residents of that country is important. Now during the age of social media prominence where everyone is in the loop on everyone else’s business and can learn about others almost instantly, it’s important for political leaders to show us who they really are.

At the beginning of the live video that was later posted, Singh warmly says, “hey friends” and explains that he was having technical difficulties. When Landry joins, she too expresses the difficulty and says she had people messaging her telling her how to troubleshoot. For young people, they know the struggle with social media. The reactions of Singh and Landry are real and raw. It brought me closer to the conversation because I, too, understand the faults and frustrations of technology and social media.

I will acknowledge that issues with submitting questions on Instagram were reported. It’s not uncommon that issues such as this will arise, especially when so many people are tuned in. It’s hard to keep people invested on social media, so trying new approaches and techniques could help spreading a message than can influence the younger generation.

Singh has a youthful presence and speaks like your average, day-to-day human being. He is shown to really connect with individuals of the younger demographic. If I didn’t know who Singh was, I would not even think he is the leader of a political party. Instead, he sounds like an outgoing and caring motivational speaker, which is a welcome change.

While being charismatic is nothing new for political leaders, the specific conversation, where it is held and with whom brings out another side of Singh’s personality.

On top of that, there are other ways that he is putting himself out there, such as his “text me” campaign. It’s unclear how well that’s working at this time, but it’s the effort and the attempt of getting out there to connect with individuals of this country that matters.

It’s true that historically young people have been less likely to vote, but the NDP platform naturally attracts a younger voter base compared to other parties for a few reasons. These reasons include a pledge to eliminate school debt and their strong beliefs about social causes.

As someone who has graduated with thousands of dollars in debt and who is a Canadian child of immigrants, the platform has and continues to appeal to me. Luckily, it doesn’t appear that those core NDP values will be changing.

Now there’s the matter of the change in the NDP platform. Traditionally, Conservatives and moderates have viewed certain NDP policies as “extreme,” especially a pledge to abolish the military.

That policy proposal has shifted since the pandemic has started. In the past year, the military was mobilized within Canada to assist with various situations pertaining to the pandemic. The military is also a huge employer, so dismantling it would do more harm than good.

As stated in the NDP’s new platform, the party saw how useful the military truly is to this country and chose to eliminate their original promise to abolish the military.

The NDP taking more of a moderate stance will be the Liberals’ next concern. It appears the party is maintaining their core values while shifting a bit more in the middle, which will attract a broader audience.

The NDP has become very appealing because they are tapping into the beliefs and values of a younger generation of Canadian voters.