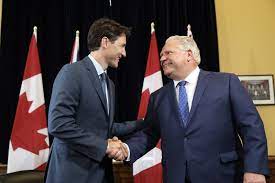 Editorial: Will the political careers of Ford and Trudeau survive the pandemic?

There is no possible way that either Trudeau or Ford can survive the pandemic during the next federal and provincial elections.

While no one could have predicted a global pandemic was going to strike precisely in 2019/2020/2021, there were plenty of scientists who said a pandemic was an inevitability. Unfortunately, no one in the federal government listened.

And to be fair, it’s doubtful that either Canadian Prime Minister Justin Trudeau or Ontario Premier Doug Ford had 'pandemic' on their Top 100 Concerns List when they were running for office.

Strong, steady leadership was required to steer our great nation through the past year and a half. Leadership that truly never came from either Trudeau or Ford. Our elected officials are not doctors, by any stretch of the imagination. That's why they have advisors.

Unfortunately, neither Trudeau nor Ford went all-in on following the expert medical advice. They approached it like it was a buffet and just picked what suited them at the time.

No mask, then masks, then killing all the good germs with hand sanitizer to get a miniscule amount of bad germs; lockdowns that were never really lockdowns; unemployment rates through the roof; months behind the other G7 and G20 nations in vaccine administration; federal contracts which unnecessarily sent hundreds of millions of dollars to other nations; the provincial government only listening to the science and data that suited them; people able to attend high risk indoor religious services but not able to participate in low risk outdoor activities; the destruction of small businesses while large corporate entities thrived; and the list continues.

While other nations were happily shutting down airports and closing borders in February and March 2020, our Prime Minister never actually did full closures. Rather than follow the scientifically sound advice, Trudeau continued to allow international flights from countries experiencing outbreaks without mandatory covid testing because he didn't want to offend anybody abroad.

Seems like a bit of a gamble with the lives of the people who will be deciding if you get to keep your office, doesn't it? The virus didn't just spontaneously appear.

While we watch our fellow nations around the world living again – and living is actually going out and doing things with friends and family – we are still stuck in some form of half-cocked holding pattern.

Plunging the nation into its deepest debt in history to fund the CERB, then send a lot of those needing the help huge tax bills because the CERB pushed them into a higher tax bracket, is not the work of someone looking to continue being the Prime Minister.

For a while it seemed as though Premier Ford was under the impression that the virus didn't work long-weekends or holidays – making those dates ideal for every re-opening plan so far.

His stay-at-home orders only mattered if you felt like following them and small communities across the province have seen huge influxes of tourists throughout the pandemic.

Then there was the hugely flawed colour coding system which was supposed to let communities with low transmission and active cases have a bit of freedom to actually live our lives. That never really worked out in Muskoka due to our connection with Simcoe County, which has continually had substantially higher COVID case counts throughout.

Then, for no explicable reason, Ford began throwing out lockdowns across the province. This despite many communities not meeting the previous colour code requirements to be in a lockdown. The flip-flopping started in the spring of 2020 and, even with a decent three phase re-opening plan announced, has not ended.

The other thing is the back-and-forth that seems to happen with the Premier and the Prime Minister. Early during the pandemic, they were supportive of each other; but as the pressure mounted, the poor decision making was evident, and the end of this situation seemed far out of reach, the chumminess has turned to outright finger-pointing.

On top of the political games being played (which is ridiculous during a time when only the people should matter), we’ve seen countless medical experts from a variety of disciplines question the rationale of both Trudeau and Ford.

This has been especially prevalent in recent weeks when Ford ignored the advice of his own COVID task force to keep golf courses and other outdoor activities closed until Victoria Day weekend. He also long ignored their advice to close – or at least ramp up vaccine rollouts – at manufacturing plants and other “essential” workplaces.

When you have politicians and medical experts offering conflicting ideas on the same topic, it makes people worry. They lose faith and trust in the system, but they especially lose trust and faith in the people they elected to office.

With an eye towards playing politics and trying please as many people as possible, both Trudeau and Ford have only managed to upset most Canadian voters. Even large portions of their staunch support base have been wavering (in some cases have turned on them completely), as the public is emotionally and mentally exhausted after over a year of the pandemic.

The next Ontario provincial election is set to occur on or before June 2, 2022, making it likely Mr. Ford is sent a message by the electorate, with COVID and his follies still fresh in everyone’s minds.

The next Canadian federal election could take place as early as this year judging by the way the Liberal Party wields the threat of triggering one like a weapon.

But, if I were them, I’d be trying to hold off the election until it’s latest possible date – October 16, 2023 – in the hopes that the economic recovery is in full swing and the voters have forgiven Trudeau’s follies.

Although, with the WE scandal, a lack of transparency and integrity on other issues, and a failure to live up to many election promises over the years, Trudeau’s days are probably numbered either way.