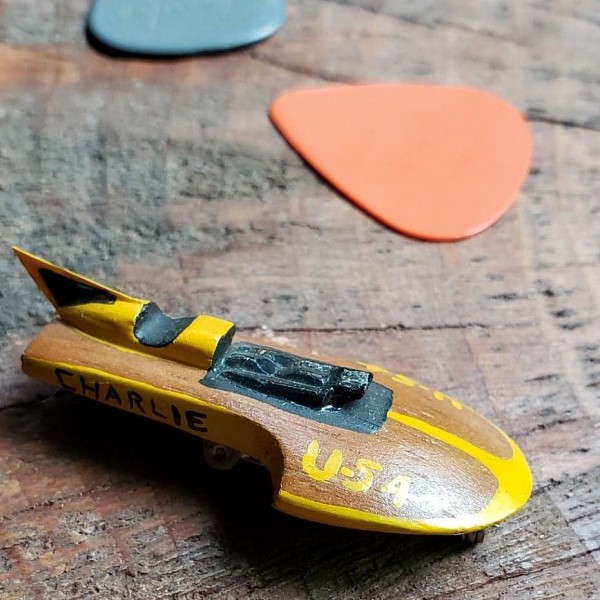 My cousin Harry Lehman III from Oregon sent me a gift the other day. We are both the grandchildren of Harry J. Lehman, founder of the Wildroot Co. Inc. in Buffalo, N.Y., and from time to time, we send each other photos and memorabilia from our distant past. Last week, I received a very special package in the mail from him. It was a pin fastened to a miniature wooden replica of “Wildroot Charlie”, a racing hydroplane sponsored by my grandfather’s company back in the 50’s. Harry, or “The Third” as he sometimes refers to himself in our missives, and I have discussed the various items we have collected over the years which are Wildroot-related. That little pin means a great deal to me.

If there’s one thing I love more than music, it’s boats. Ever since I was a toddler, I have been an avid boater. One of my earliest memories is of me floating around on Lake Erie in a tiny 5’ homemade wooden boat in front of Grampy Lehman’s cottage. Mom and Dad bought me a used 10’ aluminum boat, when I was about 6 years old, and a year or two later, they bought me a used (circa) 1960 Johnson 5.5HP motor. Once I’d tasted power, there was no looking back. I became a diehard “stink-potter”, as the sailors refer to motor boaters. I loved that little 10’ dinghy. Much later, during my antique and classic phase, I bought a very loud, and generally horrible 1953 Scott Atwater “Bail-O-Matic” to power it. A few years before the dinghy was stolen off the beach in the mid-eighties, Peter Stephens,  a successful artist friend from Buffalo, grabbed a can of yellow Rust-Oleum and painted “The Raging African Queen” on its transom, complete with a little crown over the “Q”. I think he may have been drunk at the time, and perhaps so was I. I have many happy memories of putting around in “The Queen” as she came to be known. She was legendary among my friends, because we did some ridiculously dangerous boating in her, packing way too many people into her for midnight cruises in the turbulent waters of Lake Erie. I wonder where that little dinghy is now, and why anyone would steal a boat with such an embarrassing  name emblazoned on the transom. I suspect it found a watery grave in the lake, but I swore if I ever retrieved it, I’d make that transom into a coffee table. I’d also shame Peter into signing his “work”.

Over the years, I’ve owned many boats, some powerful, some fast, some classic and beautiful, and one or two that were total losers. Each boat has fond memories attached to it. Probably my favorite among those many boats was my 1957 Chris Craft Sea Skiff, which we named the “Ahoy Vey”. Fun per dollar, that 18’ utility was the bell ringer. I bought my last big boat, a Hydrasport DC 20, around 1989, and I have had that boat ever since. It is an extremely well-built fishing boat, designed for offshore use. I used to do quite a lot of rough water boating on Lake Erie, which can be a treacherous lake for slop chop. My Hydra-Sports might be the most seaworthy 20’ boat I have ever been in, and certainly the best built boat I’ve ever owned.

These days, the “big” boat is tied up in front of our house here on Little Doe Lake in Katrine, and it gets far less use than it used to. We do not entertain a lot of guests, and I usually end up taking it out alone when I do use it.  Filling up the gas tank for a thirsty 200HP motor is not much fun when I am the one schlepping 5-gallon gas cans down to the boat. The last gas pump on our lake closed years ago for insurance reasons. As well, Little Doe Lake is hardly what I’d call a rough water lake.  When I do use the boat, I usually just do a high-speed run over to Big Doe and drift to save fuel. While I’ve considered downsizing, that boat has too many happy memories. It’s also paid for.

I still love boating, but these days, you’ll more than likely find me putting around in my 10’ folding Porta-Bote, powered by its 2.5HP outboard. It is far less thirsty, and I can still get the sensation of dangerous boating if the wind picks up. I guess I’ve come almost full circle from the days of my first boat.

I wish I’d had the opportunity to see Wildroot Charlie race in the Niagara River back in the day, but now, thanks to “The Third’, I have my own special memento of that bygone era.

(Without fail, "The Oppenheimer Report" has been written every Monday since 1992)