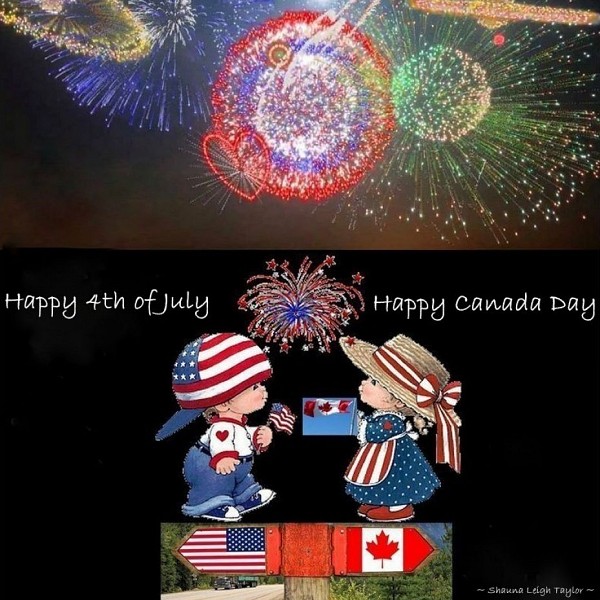 Our Canada Day last week was uneventful. As we almost always are, we were safe at home. These days, I try to time my visits into town, to be off peak, especially when I travel to Huntsville, but that doesn’t always work out. I forgot that Canada Day was in the middle of the week this year, and I went to the local supermarket in Burk’s Falls to shop for essentials on Tuesday. There was a long lineup outside. I noticed that hardly anyone was wearing a mask, either outside or inside the store. A man standing in front of me in the line to get in was yakking away to an uninterested woman in front of him. Perhaps that was his only outing for the week; he seemed to be a little starved for human interaction. Most of us are likely a little anxious to resume our more social lives, but that doesn't necessarily mean that many people are looking to befriend total strangers, at the present time.

As an American citizen living in Canada now for over 25 years, I am distressed to hear so much anti-American rhetoric. Certainly, the Orange Emperor has accelerated that downward spiral in public opinion towards Americans, but in fact, it seems the world in general is becoming more polarized. I feel the same way about anti-Americanism as I do about any generalized prejudice. For some, it appears to be easier to hate, and harder to understand. At a time when everyone needs to be on the same page, it appears as if no one is. On July 3rd, The Emperor’s-New-Clothes-rally at Mount Rushmore in South Dakota, followed by his 4th of July speech on the White House lawn, were both evidence of the complete disregard for the common-sense dictate of social distancing. While the COVID-19 numbers spike in the U.S., the puzzlingly influential Commander-In-Tweet has sent dangerous messages to his base by ignoring simple safety protocols widely deemed to be effective and necessary in controlling the pandemic. Trump does not represent America, he is simply the result of the political turmoil that has been brewing for decades.

Many of my hometown friends in Buffalo, NY own summer cottages on Lake Erie on the Canadian side, in Fort Erie, and they are unable to use those homes because they cannot cross the border due to the pandemic. While there has always been an underlying tension between the local and summer residents (much the same as there is up here in Muskoka and the Almaguin Highlands), anti- American sentiment has now reached new levels since the pandemic occurred. In Ft. Erie, there have been ongoing disputes over who owns the beaches. Users of the public beaches often trespass on private beach property, much of it owned by Americans. Now, the Town of Ft. Erie is trying to reclaim all privately owned beaches for public use. Onerous legislation has recently been introduced to strip beachfront property owners of their beach rights, if they make any sort of improvements to their homes. I do not think this bodes well for the Americans.

Last Saturday night, we watched the fireworks displays from all across America, along with internet live streamed performances by various famous musicians. I must say, televised fireworks do not have the same impact as the real deal. Also, as an expatriate, it was bittersweet for me to watch a celebration of my birth country’s independence when, at present, that country is in such dire straits. I found it telling to watch Don McLean sing a stripped-down version of his big hit “American Pie”, because his performance of that iconic song was as anemic as his country now seems. Shauna and I both enjoyed the performance of a new song by singer/songwriter Jewel. The song is entitled “Grateful”. In her introduction to the song, she spoke of her troubled past as a homeless teenager. She suffered severe panic attacks, and the song is about how she could only crawl out of her desperate mental state by forcing herself to focus on gratitude. I’ve been in a dark place these past several weeks, and I know that many of you are feeling the same. I understand that we all have different views about how to proceed from here, but hatred and divisiveness won’t get us there. I wake up every morning, reminding myself of things for which I am grateful, and I hope you can do that too. It does help.