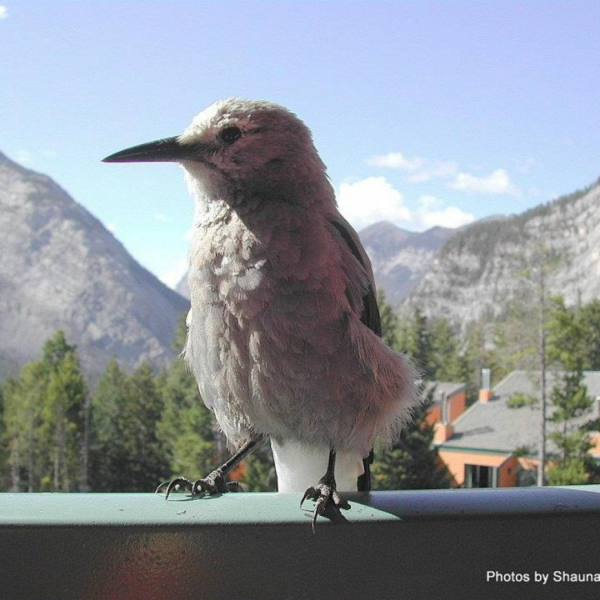 As I mentioned in last week's report, I have been bird-watching as a distraction from the nonstop bickering and bad news. On my daily walk yesterday, amidst the blessed silence, I heard the staccato pecking of a nearby woodpecker. Then, there was another, and then another, and pretty soon, I was listening to a drum solo. The echo of three woodpeckers pecking on hollow tree trunks, in three different keys, was very pleasing to the senses. For just a moment, focused on the sublime cacophony of nature's rhythm section, I was distracted from the hurricane of my thoughts. I was at peace, and it was like tasting honey for the first time. I realize I don't spend enough time savouring these moments.

I find birds entertaining to watch. Years ago, when we spent time in the spring and early summers hiking the mountains in and around Banff, Alberta, that is when we began to marvel at birds. We had names for many of them. We called the beautiful Magpies who visited us "Pie A La Mag", and as well, we had names for the Grey Jays, Dark-Eyed Juncos, and  Clark's Nutcrackers.  One Clark's Nutcracker came back to visit us every year on the balcony of Room #421 at the Douglas Fir Resort & Chalets. We knew it was the same bird because he (for the sake of argument) had a distinct personality, and he was missing one claw. We called him "Broke Toe", and he was a constant source of entertainment. Every morning, he would sit on our balcony and wait for us to awaken. As soon as we opened the curtains, he would hop up and down on the balcony railing, visibly happy. Broke Toe was a delightful companion, but not a very good singer. The song of the Clark's Nutcrackers is a little like what Gilbert Gottfried would sound like if he sang. We also befriended a Common Raven whom we dubbed "Big Black Bird". He (or she) would bring us presents from time to time which resembled little egg-shaped balls of twigs. I'm not exactly sure what those gifts meant. I choose to think it was a gesture of gratitude for our friendship, but maybe it was bird language for "Luca Brasi sleeps with the fishes". One day, Big Black Bird brought his entire family to visit. For the longest time, we'd been hearing blood-curdling screams coming from the nearby woods, and we were worried someone was being assaulted. When Big Black Bird introduced us to his family, the mystery was solved. As it turns out, that the horrible screaming is the sound raven babies make when they're hungry. It's really quite upsetting.

Last week, I mentioned that Shauna and I had watched some eaglets hatched on a live webcam. This past week, we have been checking in on the babies, and I'm now obsessed with the eagle family. Those little guys are butt ugly when they're born, but they're getting better looking every day. The eagle's nest in question is near a trout farm, and we watched as the eagle mom and dad (they seem to take turns) regularly flew away and returned with a newly pilfered fish for the young ones. Those little ones eat A LOT. Never before have I paid attention to eagles feeding their young. It is mesmerizing. I always think of those birds as fierce predators, but their behaviour with their young is quite touching. They seem gentle and patient. By the way, you haven't lived until you've seen a baby eagle poop. They stick their little butts in the air and projectile squirt guano. It's gross! I know, I know, get a life Jamie. But seriously, I ask you, what IS "a life" these days?

Late last Saturday night, Shauna and I were checking in on the eagle family as the babies slept. Plied with fish, one ugly little ball of fur was out cold, with its head buried in the nest and its little unformed wings spread out. Another was passed out with its little head resting on a twig for a pillow. Finally, the on-duty adult dozed off, but only for a moment before something woke it up. It went into high alert, pointed its beak at the sky and made the strangest noise I've ever heard come from a bird. In short, that is about all I've accomplished in the past week, watching eagles tear fish apart to feed to their projectile-pooping young. Whatever gets you through the day, right? Don't judge me.