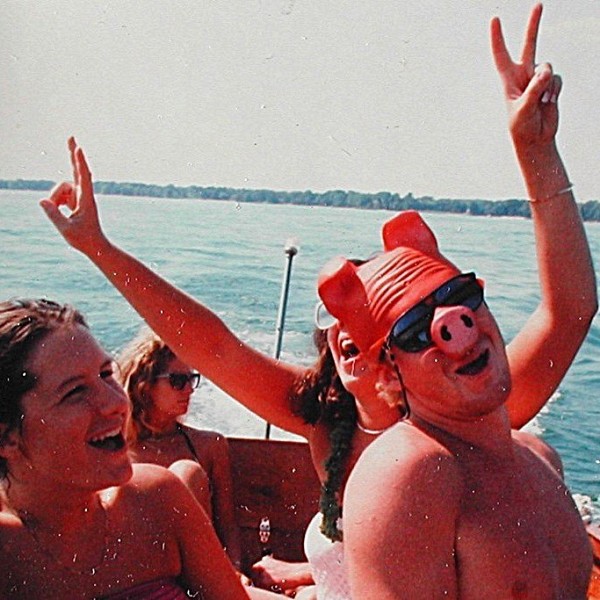 When I was young, “Funnelators” were popular. They are basically slingshots on steroids. We used them to launch water balloons, and they were typically made out of surgical tubing attached to a medium sized funnel or pouch for launching the water balloon. In my high school days, many a water balloon war was waged with these giant slingshots, and I’ve been on the receiving end of one of their watery projectiles. They decidedly take water balloon fights to a new level.

Jump ahead 15 years, and I am now a young adult (and I use the term “adult” loosely). One of my friends who was an avid sailor told me of a commercially available version of the legendary funnelator. Marketed as a “Winger” it was much more sophisticated than the primitive makeshift weapon I had once used. Sailors liked them because, when there was no wind during a race, water balloon wars were a popular distraction. Wingers made every water balloon war more interesting. Of course, I immediately ordered one, and over the years, I had a lot of fun with it. Together with my crew, (it takes 3 to operate a Winger) we did some crazy things with it. One hot summer day, armed with my Winger and a bucket of water balloons, half-filled for maximum distance and velocity, my scofflaw friends and I motored over to Crystal Beach Amusement Park in my 1957 Chris Craft Sea Skiff, “The Ahoy Vey”, and terrorized unsuspecting amusement park attendees. It was an assault-by-lake. We moored about 150 yards offshore and started catapulting water balloons at the Comet roller coaster which, if you remember Crystal Beach, was located right along the shoreline of Lake Erie. After some test shots, we became quite proficient at shooting water balloons directly over the peak of the coaster. Imagine their surprise when coaster riders, upon reaching the top of that first drop, saw a water balloon fly by just above their heads at 70+MPH. I suppose some people in the park waiting in line to ride the Comet were hit by those balloons, and I’m sure they had no idea from where those water missiles came.

Over the years, there were countless incidents of lawless behavior; cocktail parties invaded, unsuspecting beach walkers attacked, bonfires destroyed. One night, we performed a stealth night attack on 2 bonfires which were situated about 100 yards apart. We sat out in the boat in the darkness, and launched balloons at one bonfire, then at the other. In the darkness, as we were invisible to our victims, the people at each bonfire thought the other participants were the attackers. We watched in delight as the 2 parties began to argue. No one suspected that water balloons were coming from a boat 150 yards offshore. One night, fueled by a combination of reckless abandon and boredom, we got the bright idea to shoot balloons straight up into the air. Again, we did this on my Chris Craft utility, out on the lake, in the dark. The surprise of not knowing where one of those balloons would land was remarkably exhilarating. Once launched, a balloon took what seemed like an eternity to come down, and it was always exciting to see how close to the boat the rogue balloons would land. It might not have been the stupidest thing I ever did on a boat, but it was close.

Speaking of fun, I have one final note in the nostalgia department. R.I.P. Cynthia Doolittle, one of the iconic mothers from my old neighborhood in Buffalo, NY. I miss her already, because she was the personification of fun. I was reminiscing with her eldest son about his mom, and one of my favourite Cynthia stories involved that elder son and another friend roughhousing with the younger Doolittle brother down in the basement. The younger brother came upstairs and complained to Cynthia that he was being abused by the older boys, and Cynthia replied: “You’ve got to be tough to play with the big boys.” The Doolittles were hands down the most entertaining family on our block, and Cynthia would have heartily approved of the Winger.
Written by Jamie Oppenheimer ©2020 ALL RIGHTS RESERVED
jamieoppenheimersongwriter@gmail.com