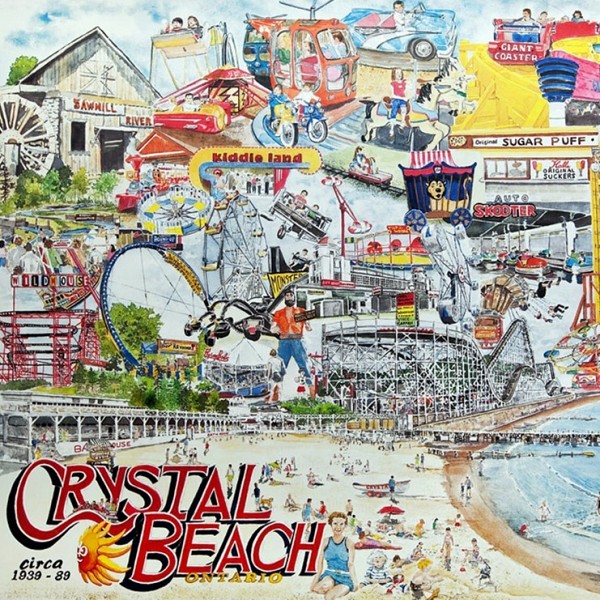 The other day, I was browsing through some old photographs of Crystal Beach on a Facebook group dealing with all things to do with the long-gone amusement park. There are photographs of the old Cyclone roller coaster and other rides and attractions that were gone before I was born, and archival photos dating back to the 1920s. I read somewhere that Crystal Beach began as a religious Chautauqua, somewhere around the beginning of the 20th Century. It gradually evolved into a noisy midway and amusement park, which is what I remember so fondly. Having spent well over 50 summers as a younger man a few bays east of that park, I spent a lot of my idle hours, of which there were a few, in the little town of Crystal Beach. Whether it was cruising around town in my 1970 VW Beetle or hanging out in the cacophony of compressed air brakes, bells, whistles, barkers, and noisy, colourfully lit rides on the midway, Crystal Beach has been indelibly branded in my memories. And those handmade suckers were the best.

Before I was old enough to drink legally, my friends and I used to go to the Ontario Hotel off Erie Avenue. The management there was not especially concerned with under-aged drinkers, and my friends and I would buy gin and tonics, which were less than a thimble of gin and a shot of tonic in the tiniest tall glass you’ve ever seen. The joke was that those Ontario Hotel drinks didn’t have enough liquor to inebriate a field mouse. Still, it was a right of passage, and we were whooping it up in Crystal Beach. I did a lot of whooping it up in the 70s and 80s.

Old photographs of the park conjured up some happy memories for me. One photograph in particular showed a vacant lot where once stood my favourite watering hole in Crystal Beach, The Palmwood. I guess it was billed as a motel, but I think the main source of income was the drinking crowd. The Palmwood often featured live music on the main floor, and for the “younger crowd” there was a rowdy basement bar called “The Circus By The Sea”. That it was, and on a Friday or Saturday night, that bar was packed with a lot of crazy people, with Rock music playing loud enough to decompose fruit. Why that was appealing, I can’t quite remember, but there’s much I cannot remember about my ill-spent youth. Perched on the North shore of Lake Erie, perhaps 100 yards from where the Comet Roller Coaster used to stand, was The Palmwood. It overlooked the skyline of Buffalo to the east and the beautiful Point Abino Lighthouse to the west, and therein reside some of my happiest memories. Time marches on and what was once my favourite Crystal Beach drinking hole will apparently soon be condos.

Years ago, I wrote a song, which my friend Sean Cotton produced for me, entitled “Grampy’s House”, and the song deals with the relentless passage of time. Cherish the family you have, be it a conventional family, or an unconventional family, or simply the friends you choose to be your family. It all changes in the blink of an eye. Happy Family Day to one and all.

“Carcass of an amusement park, on the western sky
In the purple madness of the night, I long for simpler times”

The District of Muskoka is asking residents to help them fight āfatbergsā...

Hunters Bay Radio is Muskokaās not-for-profit Community Radio Station and the only radio station in Muskoka that is truly locally owned. We operate with a contingent of over 50 staff and volunteers. We fill a void in the local media by providing a wide variety of music and community programming, not otherwise available in the region.